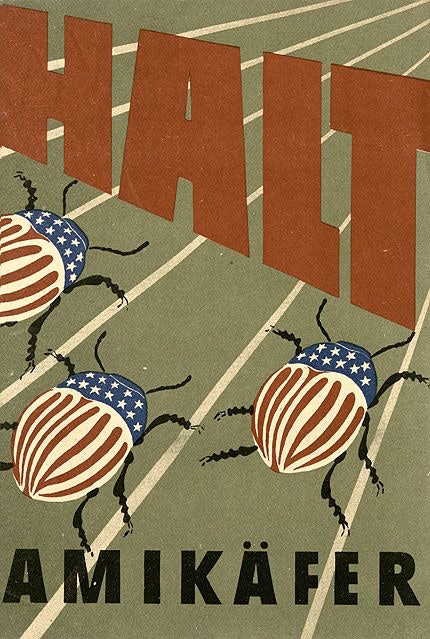 Berlin-Conspiracy theories are nothing new, and the early years of the Cold War certainly had their fair share. In 1950, propaganda and media reports claimed that there had been several sightings of American planes over East German fields, swiftly followed by the appearance of clusters of potato beetles, which can decimate crops, on the land below. And so the myth of the Amikäfer (Yankee beetle) was born.

According to the propaganda, the beetles had been dropped so as to weaken East Germany's agriculture and economy and turn a profit selling a new pesticide to fight the beetle plague. Claims that the bugs had been found not just in the fields, but in cities and inside people's houses too, were supposed to provide evidence of foreign, capitalist malice.

Not everyone bought into the story - the GDR did face potato beetle infestations in 1950, but because the insects had long been prevalent in Germany already, some accepted this as a natural phenomenon. Historians have also suggested that American planes, which were still flying supplies to West Berlin a year after the end of the Berlin Blockade, were a convenient scapegoat to cover up a national shortage of pesticides.

Whatever the explanation, the impact on GDR crops was potentially serious, so books and leaflets were distributed encouraging children and young people to go into the fields and pick as many beetles off the potato plants as they could. An outraged government committee even demanded that the UN bring charges against the US government for its act of potato warfare. In the end, this did not happen.