The Berlin Superhot Chili Project is buying peppers from local growers to create a sauce made in Berlin exclusively with Berlin ingredients.

Berlin - Comedy producer and environmental activist Neil Numb was brainstorming alone early this year. How much balcony space, he wondered, would be available in Berlin for commercial agriculture if someone wanted to take advantage of it?

As he was debating where to get some figures to begin his calculations, he went out for a beer with friend Jonathan O’Reilly, founder and owner of Crazy Bastard Sauce, a line of hot sauces ubiquitous at Berlin markets.

“He was telling me how hard it is to get fresh chilis all year round in Berlin,” Numb says in a Scottish accent that makes it difficult to discern where a word ends and the next begins. The two ideas collided in his head.

He and O’Reilly started discussing the possibility of a balcony-sourced sauce with chili peppers from inside and outside the S-Bahn Ring. The vinegar, a key hot sauce ingredient, could even come from a Hauptstadt supplier.

“The original plan was that I was going to grow the chilis and [Jonathan] was going to sell them at the markets,” Numb says. The plants would be a novelty alongside the sauces.

But they then realised they could actually buy the chilis back from the customers and create a local supply network. They were soon selling seeds and seedlings as well as making deliveries to community gardens and squats around town.

About 500 people are now fostering 1,200 plants on balconies, allotments and courtyard gardens. Seedlings cost €4 each and a packet of seeds €3. They’ll buy up to 2kg of superhot chili peppers from individual growers for €20 per kilo cash or €30 in Crazy Bastard credit.

The project will peak with the release of the first batch of sauce at the Berlin Chili Fest at Jöckel Biergarten in Neukölln on 26 September. A bottle should cost about €6. 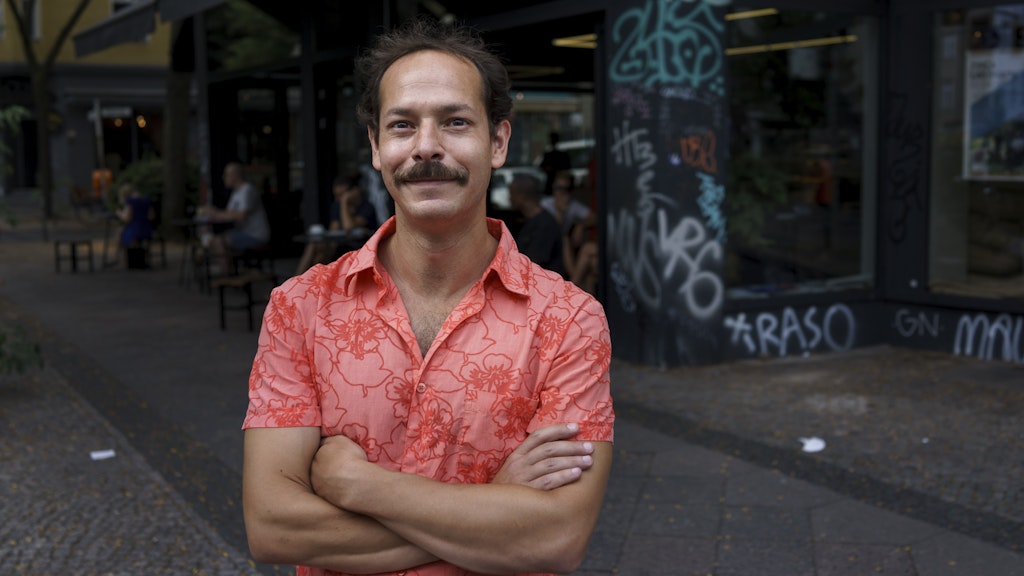 The fest will include competitions for the ugliest pepper and best-looking plant but won’t have a chili-eating competition because of the discomfort that can cause competitors.

The seedings are Carolina Reapers, the world’s hottest pepper plant, but the project will buy any pepper grown within 50km of Crazy Bastard’s Westerstraße store in Neukölln with a Scoville (hotness) rating of 1 million or above – Carolina Reapers rate 2.2 million.

Tabasco sauce, by comparison, comes in at about 5,000 units.

Numb used his broad Facebook network to publicise his and O’Reilly's project. He is a popular English-language comedian and co-produces the Cosmic Comedy English comedy shows in Mitte as well as the Sprinkles of Self Doubt show at Il Kino in Neukölln, though Sprinkles is on a corona hiatus.

“The timing was perfect. It was just the start of lockdown,” Numb says. “You get emotionally attached to the plant because of the payoff at the end.”

And it’s already paying off for Americans Jae Brim and Greg Hanefeld. They were the first to sell Carolina Reapers harvested from Numb’s plants to Crazy Bastard.

Hanefeld moved to Berlin from San Francisco in 2017 and Brim followed the next year.

The pair were surprised by how well two habanero pepper plants thrived on their terrace last year and liked the idea of the Superhot Chili Project growing food on otherwise unused spaces.

In early August, they sold 500g of chilis to Crazy Bastard, opting for cash rather than sauce because they’ll have plenty of peppers to make sauce with on their own.

“We have like another kilo and there’s more peppers on the plants. The plants are huge. They’ve taken over the whole terrace,” Brim says, giving partial credit to the lockdown.

“Part of it that worked so well is that we were stuck here. We could only walk around and have coffee and water the plants every day,” Hanefeld says.

Neither has any plans to try one raw.

“Before you bring them over, you have to cut the stems off and your eyes start watering from the pepper fumes,” Brim says. “I accidentally picked up a bunch with my hands and had chemical burns.”

Crazy Bastard Sauce’s O’Reilly says Carolina Reapers were chosen because their high Scoville rating means they won’t need lots of fruit: “You can put a tiny bit of that with some tomato sauce and you’ve got a hot sauce.”

The Irishman started Crazy Bastard in 2013 when, at the age of 30, he realised he couldn’t just work in bars the rest of his life. He decided to turn one of his hobbies into a career but his only hobbies were ukulele and hot sauce.

He made the right decision.

It’s the second time O’Reilly is trying a balcony-sourced sauce. Last year he said five friends contributed peppers to a special one-off “Berlin Brennt” recipe, which featured pumpkins and had the Spree’s Molecule Man on the bottle. But it wasn’t as strictly Berlin sourced.

“I’ve wanted to make a local sauce for a long time,” he says.

He admits that too many peppers might tax his supplier of apple vinegar and force him to look for a second vendor, though he won’t go beyond Brandenburg: “I can make a batch of about 100 litres with 10 kilos of super-hot. That’s well over 1,000 bottles. For the first batch in September we’re hoping to get that much.”

The success has created a cottage industry for Numb, who now sells chili and vegetable seeds as well as growing accessories at chilipunk.com. He’s even considering a full-time farm somewhere within the city.

“Neill has really grown the community, which means that we’re going to get a lot more chilis than last time,” O’Reilly says. A Berlin Chili Growers Facebook page has attracted over 400 followers and provides advice for gardeners and a place to show-off plants – even those not related to the project.

“If we can make enough of it, we can sell it all year around. We can freeze the chilis. Use seasonal ingredients,” O’Reilly says.