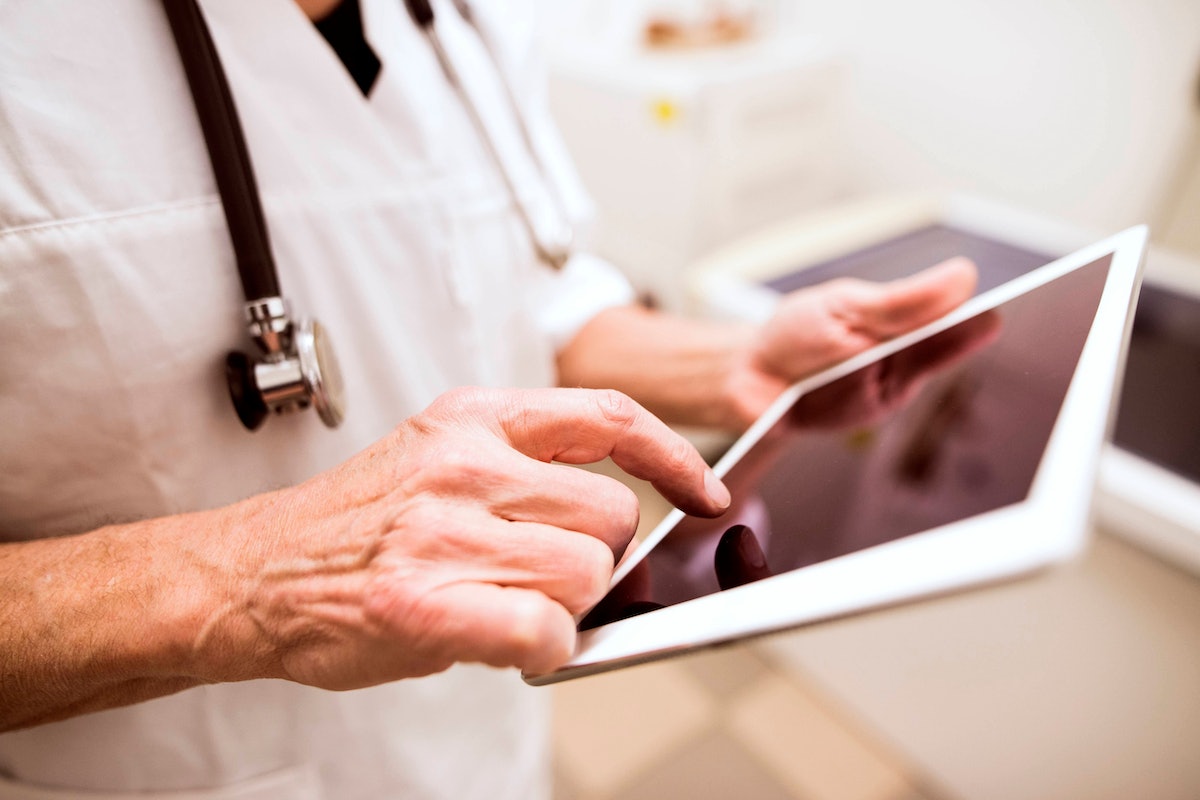 A German doctor with an iPad.

Berlin-Could it be true? After four easy steps I would be set up to take advantage of Germany’s new Elektronische Patienten Akte (EPA) – the Electronic Patient File.

This electronic wizardry would solve a problem that’s bugged me forever: keeping my medical files in one place. No more faxing, no more waiting for one doctor to snail-mail another. I could throw out those gigantic Leitz folders clogging my bookshelf.

Israel has used electronic patient records for 20 years. Finland since 2007, Russia since 2011. Germany is catching up!

I’m insured with Barmer so I downloaded their sexy e-Care app to set up my ePA. It told me to download the regular Barmer app to log into the e-Care app. I did that. The Barmer app said I needed to set up an account on barmer.de, itself a 16-step process: things like thinking up a password, confirming your e-mail address, getting a TAN by SMS, entering that, activating fingerprint identification on my phone, getting a paper letter with a code and entering that into the app. So far so good.

Finally, I had to visit a Barmer service centre to confirm I existed. Easy-peasy! Hang on, all service centres are closed – because of corona.

I took a few days off.

Rested, I attacked the project with new vigour. Besides, I was getting treated for a medical problem and the app would come in handy and even help my doctors.

I opened e-Care, typed in my 19-character username and my 18-character password – and presto, I was directed to an identification service. But first I had to install the Nect app. Done! Here, all I had to do was snap a pic of my passport and both sides of my insurance card – and then shoot a video of myself saying the words “operation” and “information” into the camera. Fun! Nect spoke English, a nice touch. After a couple of outtakes, the video was uploaded. Minutes later I received some green check marks and a friendly message saying Barmer needed one working day to double check my identity documents.

So far so good. It was more than 16 steps, but who’s counting when you’re signing up to Germany’s cutting-edge ePA, which would give doctors access to my medical records – in accordance with the European and German data protection requirements. Right?

As I waited for Barmer to re-confirm my identity I researched ePA to find out more about its benefits. To my dismay, ePA doesn’t work yet because doctors don’t currently have access. But they might by July. Sigh. But I will already be able to scan paper documents and store them in my ePA in my eCare. That’s something, right?

I uncovered more ePA anomalies. For example, each of the 105 Krankenkassen have their own differently named ePA app. A little confusing, frankly.

Also: ePA isn’t very popular. There are 73,000,000 gesetzlich insured people in Germany (the 8 million privately insured people don’t get an ePA). You’d think they’d all be as stoked as I was. But no. According to Stern, the e-Care app has been downloaded 6,800 times by my fellow Barmer members but only activated 2,600 times. Not such an awesome conversion rate considering 9 million people are insured there. On a brighter note, Techniker Krankenkasse’s TK-Safe app has been activated 80,000 times. Right on, Techniker! I guess you guys are more, er, technical.

What’s beginning to worry me though is this info-nugget: Germany’s Datenschutzbeauftragter aka data privacy guy, Professor Ulrich Kleber, said he wouldn’t use ePA himself because it doesn’t conform to Europe’s GDPR privacy regulations. Really, Ulrich? After all those security steps?

It wasn’t that. Kleber’s problem is that ePA fails to provide “granular data management.” Not till 2022 will patients be able to choose which doctors see which files. Hmm. Now wouldn’t you want all doctors to see all my records? Are doctors here so untrustworthy?

I finally got into eCare – completed a couple more security steps – exported a security code from the Barmer app into the eCare app, generated a “key” that I’d need if I wanted to use it on another device. These guys are tough!

Overjoyed, I looked forward to using the app. Alas, the screen went white. Just white. A message showed up: “Please be patient – login takes a little time” – and then disappeared.

Will anyone use ePA? Your guess is as good as mine.

Note to self: buy another Leitz file.