To publish a novel about a Stasi agent losing his mind is a bold undertaking. Jennifer Hofmann has done just that - and the result makes for a great read. 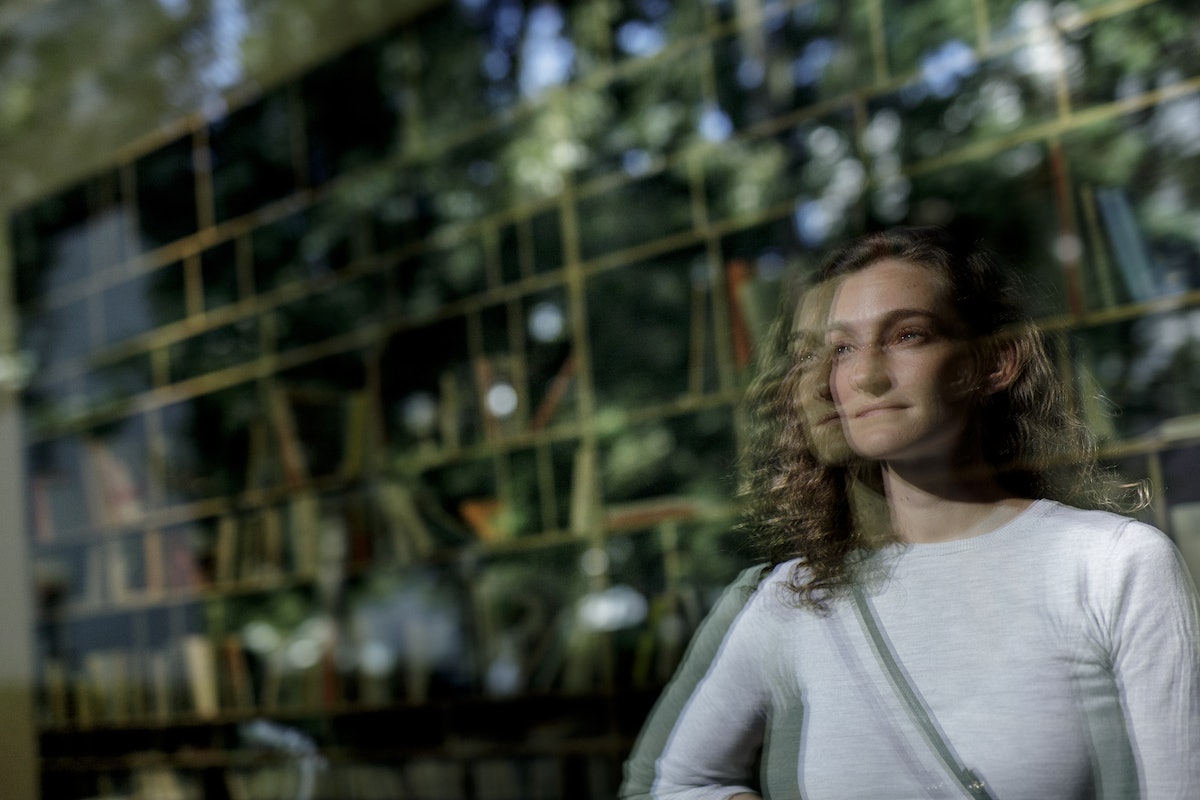 Berlin-Thirty years after the reunification of the country, the East German secret police as a subject is “a dead horse, beaten to death in Germany,” says Jennifer Hofmann. But that didn’t prevent the first-time novelist from going for it.

Hoffman talks to me just a few days before the anniversary in the café on the ground floor of the Berliner Zeitung offices, a few metres from where the Wall once sliced between Kreuzberg and Mitte. She tells me why she didn’t set out to write a novel about the Stasi and East Germany, but ended up writing one anyway.

And what a novel it is.

Don’t let the title throw you off. The Standardization of Demoralization Procedures doesn’t exactly roll off the tongue. It refers to a how-to manual the main character of the novel wrote as a young Stasi officer on how to crush people’s spirits and turn them into obedient citizens.

Image: Hachette
Jennifer Hofmann
is a Berlin-based, Austrian-American writer and translator. She was born in Princeton, New Jersey and grew up in western Germany. She received her MFA from New York University. The Standardization of Demoralization Procedures - written in English - is her first novel and was published by Hachette in August 2020. Negotiations with German publishers are underway regarding a translation.

From the first sentence of this literary, psychological thriller, we’re thrust into the morning routine – and deteriorating mental health – of an aging agent, Bernd Zeiger.

It’s not just any old morning, but a fateful day unlike any other for Zeiger and his country – the day the Berlin Wall comes crashing down.

From then on, it’s a dizzying, entertaining, at times bewildering descent into the dehumanising underbelly of the now-vanished East German state and the lives of the domestic spies whose job it was to defend it from enemies within.

Zeiger’s workday begins with an 8am interrogation of a border guard at Hohenschönhausen prison. The description of the room already reflects the nauseating palette of Zeiger’s inner world: “The interrogation cellblock was a draughty, windowless tunnel painted floor to ceiling in antiseptic pistachio green, a colour complementary to rust and blood.”

It feels like a place in which the authoritarian state has crowded out any sense of self.

"…all that scares you up there is that other soldier, and that perhaps they could shoot you and make a run for the Wall. I’d be lying if I said I haven’t considered that myself, which I think—or maybe feel?—is the most frightening part of all."

Having felt a peculiar twinge of compassion for the young man, Zeiger’s day gets odder and odder. He feels a growing foreboding – and becomes immersed in recollection. A Russian doll plot emerges as we journey along the arc of Zeiger’s life, from the viewpoint of a man who is scrambling, semi-consciously, to salvage the embers of humanity within himself through his memories of his dealings with Held, an East German physicist who spent time in the US in the 1960s, and Lara, a waitress at his regular lunch café who he is obsessed with for reasons unknown until late in the book.

We also follow the arc of East Germany itself - from the end of the Second World War until that night in 1989 when everything falls apart at the seams. As Zeiger revisits the poignant moments of his oppressive life, we inch towards his fated destination: the nuthouse. The final scene – reflecting the demented, euphoric last hours of the GDR regime – plays out with brutal comedy and delightful absurdity.

The writing of The Standardization is sometimes as austere as its world, at times ruthlessly efficient at propelling the plot, at times fantastical and weird. Realism is not the word, perhaps “hallucinogenic modernism” is more apt a categorisation. And sometimes it sounds playfully Denglish, like when a punk calls Zeiger an “old sack”.

And then there’s the teleportation – something unexpected in a novel about East Germany. Teleportation would have been considered the greatest threat to the state’s ability to imprison its population in its own country. Or, as Hofmann puts it: “This whole childish way of keeping everyone in is obsolete.”

We know about American and Soviet efforts to wage “paranormal warfare” during the Cold War – so Stasi paranoia about American experiments with teleportation doesn’t sound that far-fetched. It just adds to my feeling as a reader of treading the porous limits between the real and the absurd.

“So much in this novel is based on reality, but is driven to its most extreme conclusion,” Hofmann says, when I bring up another instance in the book where she appears to be taking creative license with history. At some point, the wife of the Stasi boss decides grey “was the sustenance of sceptics, not of socialist good cheer” and orders agents to wear colourful clothing – setting up one of the book’s funnier scenes.

“...comrades were seen wandering the courtyards in outfits of staggering creative breadth: high-waisted blue tracksuits, borrowed from athletic friends; shift dresses in dazzling primary colours; striped socks. Some darted down the corridors, ashamed of their garish ensembles, while others, with new purpose and joy in their eyes, sauntered with casual ease.”

“It didn’t happen like that,” Hofmann says, “but there was a time when Erich Honecker's wife decided that everything was too grey, so people weren’t allowed to wear grey. We need to liven things up in the spirit of reform.”

I was convinced by Hofmann’s simulation of a Stasi man’s interior life – as were East Germans who knew the secret police well who have read the book since it was published in August.

It’s not the kind of novel you expect a 36-year-old who grew up in western Germany and the United States – and who never experienced the GDR first-hand – to write.

And why did she write her first novel in English and not German even though she’s perfectly bilingual?

“I feel that English is just a more creative language. Germans would say that’s complete bullshit, but in English you have more flexibility between formal and informal modes of expression and German is a lot more formulaic.”

It’s a work that feels, in its entirety, very intentional. As I listen to Hofmann explain to me why she wrote The Standardization of Demoralization Procedures, I begin to understand the kind of author she is: one who begins with an abstract idea and then figures out how to craft a story around it as a way to dissect and probe it.

“I was interested in psychological entrapment, and the GDR was just the best metaphor for that. It was a petri dish where you could watch what happened to the human psyche when you’re psychologically, geographically and emotionally entrapped – and what remains of the human soul in a situation like that.”

And Zeiger, the novel says, codified this in its namesake textbook: “His life’s work, a substantial volume, the closest he’d come to fathering.” A horrific testament to how impoverished and lonely a life Zeiger and the real-life versions of him led. I suspect he’s far closer in psychological terms to the real thing than the gooey, sympathetic fellow played by Ulrich Mühe in The Lives of Others.

That’s probably because Hofmann did her research, mostly by scouring archives and reading university textbooks. But also from talking to taxi drivers who’d worked in “the firm” back in GDR times.

“They like to talk. That’s where I got most of my information. I spoke to one guy for an hour and a half. He turned the metre off and told me his life story. Some had intimate experience with the Stasi.”

Hofmann shares with me a startling piece of Wende trivia that comes up in the novel: “A lot of Stasi people voluntarily admitted themselves to psychiatric hospitals. The day the Wall fell and people realised what was happening, they understood it’s better to be crazy,” rather than possibly tried for their crimes later.

Before our time is up, I bring up the standard journalist’s question: how is any of this relevant today?

“There are many aspects to it and what I have to say about it isn’t very PC. The GDR was a dictatorship of opinion and I can see that happening today. We’re not being put in jail or shot but people are losing jobs for accusations that are completely unfounded. The parallels are baffling.

“That’s not something people what to hear. As writers these days, you’re very limited in what you’re allowed to say. I’m a woman, I have a Jewish background, so I’m good, right? But you never know.”

The themes in The Standardization of Demoralization Procedures aren’t particularly trendy these days – but couldn’t be more timely.