Ten years after the Fukushima accident and Angela Merkel's about turn on nuclear energy, it's time to reconsider the benefits. 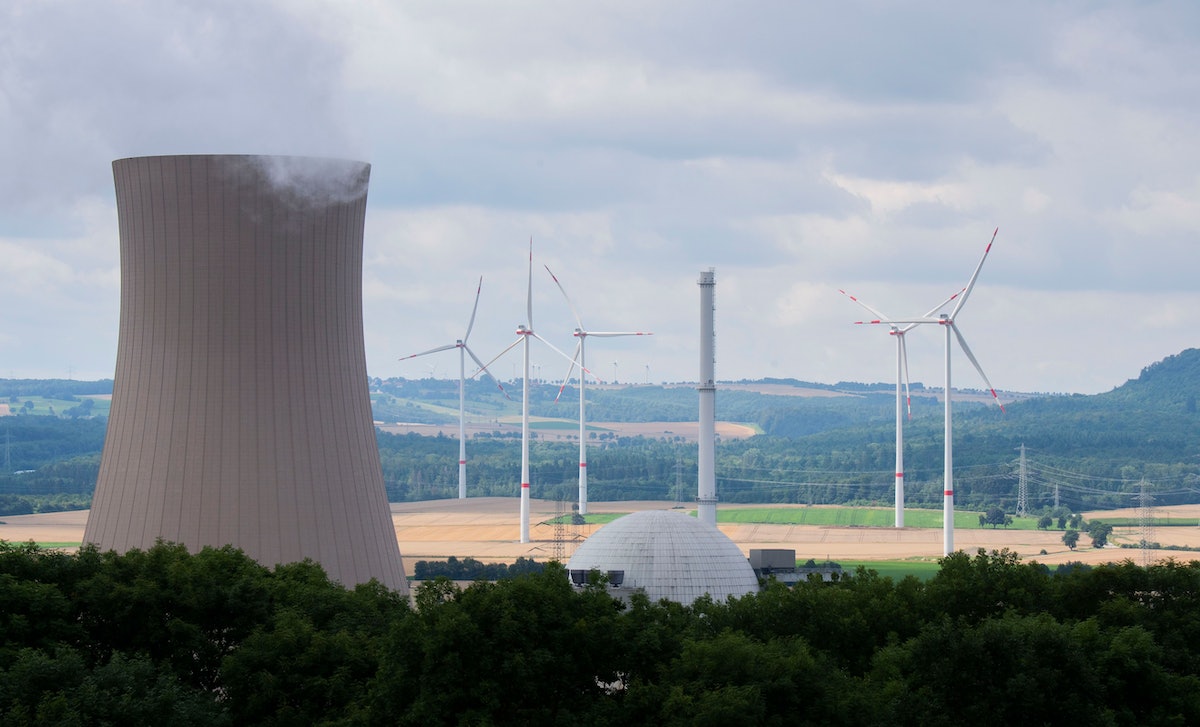 They used to be everywhere. You still see them on the occasional VW camper van.

It feels weird for me to write that. I feel that I’ve defected to the other side. Most of my life I’ve taken the orthodox eco-view on nuclear power: “IT’S EVIL, MAN!” All the same, I’ve been neurotic about climate change since my teens.

After harbouring this cognitive dissonance for decades, I feel it’s time to choose sides and that I have done: it’s time for Germany to get real about climate change and part of that should be phasing out the phase-out of nuclear. It’s time to embrace the atom once more.

Next Thursday will be the tenth anniversary of the Fukushima disaster – the event that caused chancellor Angela Merkel to perform a rapid about-face on nuclear power. After she came to power in 2005, she decided to slow down the phase-out that had been set in motion by Gerhardt Schröder’s SPD-Green coalition in 2000. But after Fukushima, Merkel did a 180 and sped up the process of shutting down Germany’s atomic energy plants. The last one is scheduled to go offline by the end of 2022.

Speaking before the Bundestag, she said: “Even in a high-tech country like Japan, the risks of nuclear energy cannot be safely controlled.” The consequences of such an accident, she said, were “spatially and chronologically so horrific, so widespread, that they by far exceed the risks of all over forms of energy.”

At the time I welcomed her change in policy. Along with Merkel’s decision to allow hundreds of thousands of refugees to enter Germany in 2015, her U-turn on nuclear helped cement Merkel’s image as an empathic leader with a strong ethical sense. By CDU standards, a progressive.

The other night I watched three ZDF documentaries back-to-back. One on the painstaking cleanup of the Fukushima site, an immensely complex task set to take decades and cost a fortune. The report paints a bleak picture of the situation on the ground – whether it’s the replacement of contaminated soil on rice farms or the vast amount of radioactive water being stored at the reactor site that will probably end up being released into the ocean because there’s nowhere else to put it. Not to mention the deaths of plant workers exposed to radioactivity and health problems of people living in the region.

Another documentary explored Germany’s journey towards becoming a nuclear-free country and the possibility of reversing that course. Another looked at Finland, whose population is embracing nuclear technology as the climate-friendly solution to its energy needs.

Despite the direness of Fukushima, the apocalyptic terror it triggered among Germans at the time now seems highly irrational. Instead of jumping on the emotional bandwagon, Merkel’s government would have done well to take a deep breath, perform a thorough risk-benefit analysis and base any decision or non-decision on that.

In her Bundestag speech, Merkel said the risks connected with nuclear power “far exceeded those of all other forms of energy.” Her statement completely ignores the fact that Germany does not lie in an earthquake region nor face the possible threat of tsunamis - the combination that led to the meltdown in the Japanese reactors. It also totally ignores the far greater damage constantly being wrought by fossil fuels and climate change caused by them: drought, wild fires, flooding, ocean acidification, starvation, crop failures, food shortages and possible mass migration – to name a few.

She also overlooked the huge benefits of nuclear: virtually no carbon emissions.

Fear with a history

The German anti-nuclear movement reached its pinnacle in the late 1970s and early 1980s, when tens of thousands would gather to demonstrate against the construction of new power plants and waste storage facilities. “Of course I was anti-nuclear, that’s what you were as a leftwing person,” says a historian interviewed in one of the ZDF docs. She has since changed her position.

Out of the anti-nuclear power movement – which overlapped with the peace and nuclear disarmament scene - eventually grew the Green Party.

Back in the 1980s, activists in their sputtering VW buses could hardly fathom that those sputtering fossil-chugging motor vehicles would end up being a far bigger problem than even nuclear power. Climate change was barely on the radar in the 1980s. The horrific meltdown in Chernobyl revived the anti-nuke movement. A whole generation of Germans has memories of contaminated strawberries from the summer of 1986 – when a radioactive cloud drifted towards western Europe.

When the SPD-Green coalition came to power in 1998, the party of VW van drivers could finally get its way. By the turn of the millennium, a plan to phase out nuclear power had been passed by the Bundestag. Climate change – which was mainly caused by the burning of fossil fuels - had also entered into the public consciousness and was high on the Green agenda. And thus, the Energiewende was born, an ambitious programme of solar and wind energy that was the envy of the world.

Wind and sun can't keep up

Alas, 20 years on, the Energiewende just isn’t cutting it. German greenhouse emissions remain unacceptably high. The country missed its climate target for 2020 by a long shot. By last year, Germany had reduced its greenhouse emissions by 32 per cent compared to 1990 levels rather than 40 per cent as planned. And it cheated: much of those reductions can be attributed to the wholesale shutdown of inefficient East German industry after reunification.

Merkel was once nicknamed the “climate chancellor” because she visited some polar bears in the Arctic. In reality, her government will allow coal plants to spew insane amounts of CO² until 2038 – another 17 years during which coal companies are allowed to keep demolishing villages to make way for their massive open-face mines to extract lignite, or brown coal, the dirtiest fuel on the planet.

Merkel has also been hopelessly timid in her efforts to try to get the car industry to develop alternative fuels and drivetrains. Having virtually turned a blind eye to the emissions scandals of the last decade, the government has let the SUVs taking over our streets grow in size while continuing to pump billions into new autobahns. As long as the CDU is in power, Germans can rest assured that the right to drive as fast as you like will remain sacred – or as Die Welt editor and Porsche enthusiast Ulf Porschardt puts it: the speed-limit-free autobahn “is the last area of freedom”.

The truly insane thing is that Germany has committed to phasing out nuclear and phasing out coal – in order to fulfil its obligations under the Paris Agreement - AT THE SAME TIME.

But energy use continues to climb and will continue to do so. Especially as the entire vehicle fleet is supposed to transition to electric within a few decades. The government’s climate plan foresees 10 million electric cars on the road by 2030 – but electrification will increase demand for clean power by a quarter according to Max Girkink, an energy researcher at EWI, an institute at the University of Cologne. The EWI found that Germany will fail to achieve its goal of 65 per cent renewable energy by the end of the decade. Girkink forecasts that the country will require 748 terrawatt hours of electric power, 26 per cent more than today.

And while I wish to believe it were true, wind turbines, solar panels and biomass just won’t cut it after the last nuclear plant is pulled from the network at the end of next year.

“We are currently seven times below what we actually need in terms of wind power expansion and are therefore miles away from the target,” Dirk Güsewell, head of project development at the Baden-Württemberg utilty EnBW told Handelsblatt. To meet the target, Germany will have to erect an average of 3.5 wind turbines per day. Till now, the pace has been half a turbine per day.

Add to that the fact that Germans are sick of the sight of more and more turbines sprouting out of the ground – the Verspargelung or asparagus-isation of landscapes. My granola heart used to skip a beat at the sight of the odd wind farm. Now, they’re everywhere you look as you travel through Germany and it’s not a pretty sight.

In short: As huge parts of the economy get electrified on the path to 2050 (when Germany and Europe are supposed to reach climate neutrality) demand for clean electricity will skyrocket. Its hard to imagine where that power is supposed to come from without nuclear in the mix.

Once upon a time, like many sympathetic to the green cause, I believed that people in the rich world would just wake up and begin to consume less. People would simplify their lives, ditch their cars for bikes, choose trains over planes. Wind and solar would be enough to fuel our dialled-back lifestyles. Maybe some of that could still happen. But even if it does, it won’t be enough to slow the juggernaut of our energy-intensive society – which, let’s face it - appears to be what most people want. Capitalism is to blame, some will shout. To which I would respond, even a far more equitable economic system than ours today would require ever more energy to fuel progress.

It’s probably a good thing that the monster nuclear plants of the 1960s and 1970s are being decommissioned as they did have many safety issues. The technology has progressed substantially since then. New types of reactors being developed around the world are much smaller and much safer. Some can even be run on reprocessed uranium from older plants.

Ten years ago, the Finish Green Party changed its position on nuclear power because it saw it was the only realistic path to climate neutrality. For the German Greens to do so would be political suicide right now, so embedded is the anti-nuke impulse in their DNA. But if they’re honest, they too will have to concede that the future is nuclear.