Several demonstrations are planned in Neukölln, Kreuzberg and elsewhere. The police are counting on reinforcements from other German states.

Berlin - This year's 1 May will be a busy day for political activists and police alike. On May Day 2020, almost all demonstrations were banned. This year, several large marches with thousands of participants are planned for Friday evening and on Saturday, International Workers' Day.

This year, too, the police do not expect things to remain peaceful. The mood in the radical leftwing scene is heated. March saw the eviction of the leftwing pub Meuterei in Kreuzberg, accompanied by protests, some of which turned violent. Meanwhile, in the Berlin Regional Court, an eviction process is underway against Kadterschmiede, an illegal bar on the ground floor of the partially squatted building at Rigaer Straße 94 in Friedrichshain.

A hearing scheduled for this Monday was cancelled on Friday due to a motion to have the judge disqualified for impartiality. In a separate dispute in the same building, a fire safety expert is expected to inspect Rigaer 94 in June. The squatter trailer settlement Köpi in Mitte and the self-managed youth centre Potse in Schöneberg are also threatened by eviction. 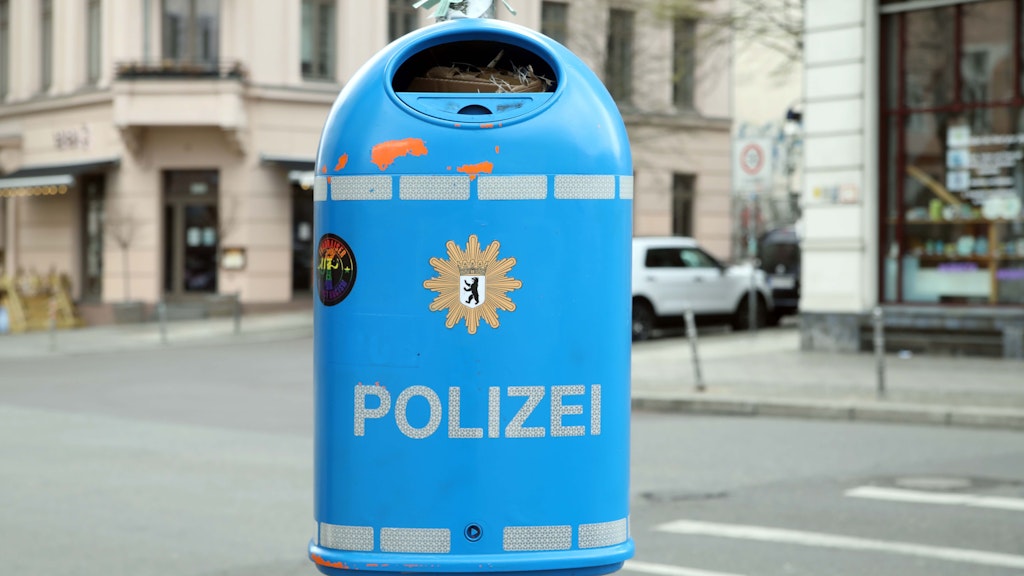 Art or protest? Who installed blue police trashcans in Kreuzberg?

Above all, there's the issue of gentrification and displacement. How much potential for protest these issues contain became apparent on 15 April, the day the Constitutional Court overturned Berlin's rent cap law. Up to 10,000 people spontaneously took to the streets in Kreuzberg shortly after the decision was announced. After the demonstration ended, hundreds of people fought with police. Officers were attacked with bottles and stones, even wooden boards, say police.

A different kind of "Revolutionary May Day Demo"

The evening of Friday 30 April will already see several demos, such as an "angry feminist demo without cis men" in Kreuzberg, which is directed against "everyday patriarchal violence against women, lesbians, non-binary, inter and trans persons". And under the slogan "From crisis to expropriation", leftwing groups plan to march through Wedding.

A number of demonstrations have been registered on 1 May itself, from a bicycle demo put on by the German Trade Union Confederation and smaller rallies at the Brandenburg Gate to a demonstration by the Berlin club scene at noon, and the "Revolutionary May Day Demo" in the evening.

This year the famous demo will be different. Whereas in previous years the "Revolutionary May Day Demo" usually started at Oranienplatz in Kreuzberg, this year the protest kicks off with a rally at Hermannplatz in Neukölln at 5pm. At 6pm, the demo is supposed to progress along Karl-Marx-Straße and Sonnenallee and then through Kreuzberg. This year, the demo has been organised by an alliance largely of migrant organisations, such as Migrantifa. The anti-racist, anti-capitalist protest wants to highlight issues such discrimination in the labour market, racial profiling by the police and speculation on the housing market.

Freedom of assembly not affected by curfew

The police are bracing themselves for a "city-wide event situation" and counting on support from riot police squads from other parts of Germany. "We won't be able to say who is coming until the middle of the week," said police spokesperson Anja Dierschke. She said the police will pay attention to compliance with the corona regulations such as maintaining distance and the use of face masks.

In light of recent violent protests, the police union (GdP) hopes for strong support from other states. "The last few weeks have shown that the new Freedom of Assembly Act minimises police measures to prevent violence. People come to events with protective armour and specifically attack people who are ensuring basic rights and the security of this city," said GdP spokesperson Benjamin Jendro. Referring to the new corona regulations in force since Saturday due to the Infection Protection Act, he said: "It would be nice if open questions, for example the effect of the curfew on participation in demos, could be clarified by then."

Right now the police are assuming that freedom of assembly is not affected by the 10pm curfew.