A new book describes the first century-and-a-half of a line that's proven itself time and again.

Berlin - Many Berliners used their downtime during the pandemic to get to know Brandenburg's forests and lakes . But Sven Heinemann didn't. He hiked through the city, folllowing a very special route. "I walked the Ringbahn twice," says the Friedrichshain resident. "37,044 kilometres each time in several stages."

Heinemann carried a notepad and camera to collect grist for his upcoming book about Berlin's circle line. And with good reason : On 17 July 1871, 150 years ago, the first section of the ubiquitous public transit route was opened. The Ringbahn quickly grew to become one of the most important rail lines in the city. "The Ring fascinates me," says the author.

If Heinemann had hiked during the early days of the route, he would have spent most of his days in the countryside. "The line ran initially through rural areas entirely in Brandenburg," Heinemann, a 42-year-old social scientist, says. Today a route like the Ringbahn would likely spark lengthy discussion, especially among government auditors.  What's the point of building a double-track rail line though the flat countryside?

"But there was no criticism whatsoever," he says. The Prussian state spared no expense and effort, and had good reason. At the time, Berlin rail lines ended in terminus stations. Although a line that ran through the middle of the city connected the stations at ground level (including through Eisenbahnstraße in Kreuzberg), it was inefficient and the line was beginning to interfere with the increasing traffic on Berlin's streets. More capacity was needed, including for troop transports and freight.

And so, in 1867, following a royal cabinet order, construction began on the Ring, initially called the Neue Berliner Bahnhofs-Verbindungsbahn or Gürtelbahn. Railroad construction inspector Ernst August Dircksen was head of the railway and would later also promote the Stadtbahn (S-Bahn) in the city centre. The first short sections went into service in 1870, bringing wounded soldiers from the Franco-Prussian War to a military hospital in Kreuzberg. In today's Wedding, cows and pigs were transported via Gesundbrunnen to the cattle market, which was located on what would become the AEG factory. On one of his walks, Heinemann discovered remnants of the route. "The oldest section of today's Ringbahn has been slumbering in the bushes for 40 years." 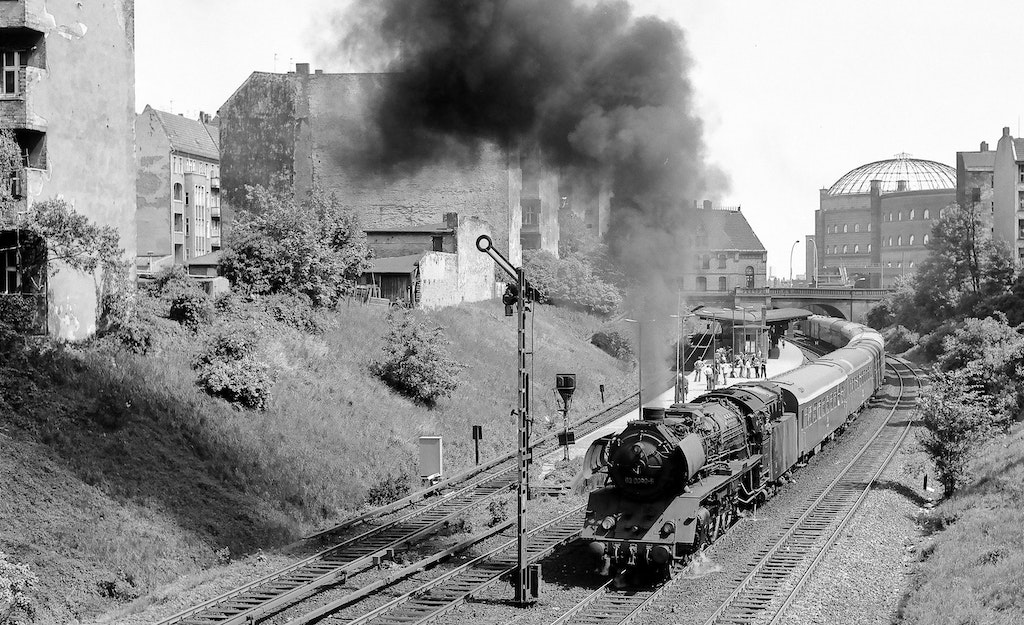 Steam operation in 1979: With locomotive 03 0090 in the lead, express train D814 Leipzig-Stralsund passes the Prenzlauer Allee S-Bahn station in Prenzlauer Berg. The gasometers of the Dimitroffstraße gasworks, one of which can be seen in the background, were blown up in 1984.
Karsten Risch/Sammlung Sven Heinemann 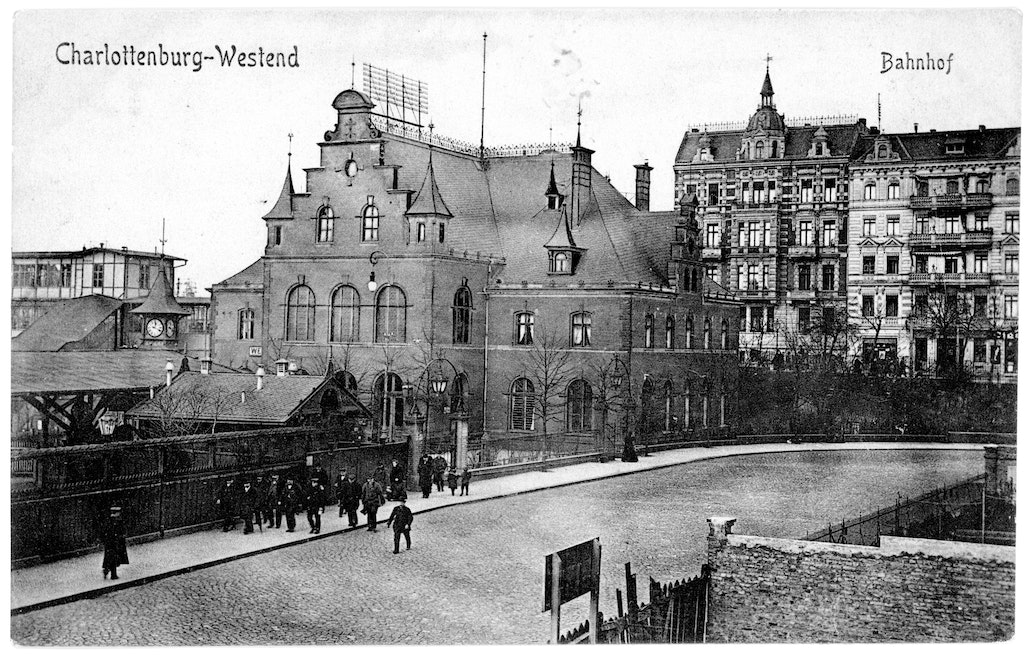 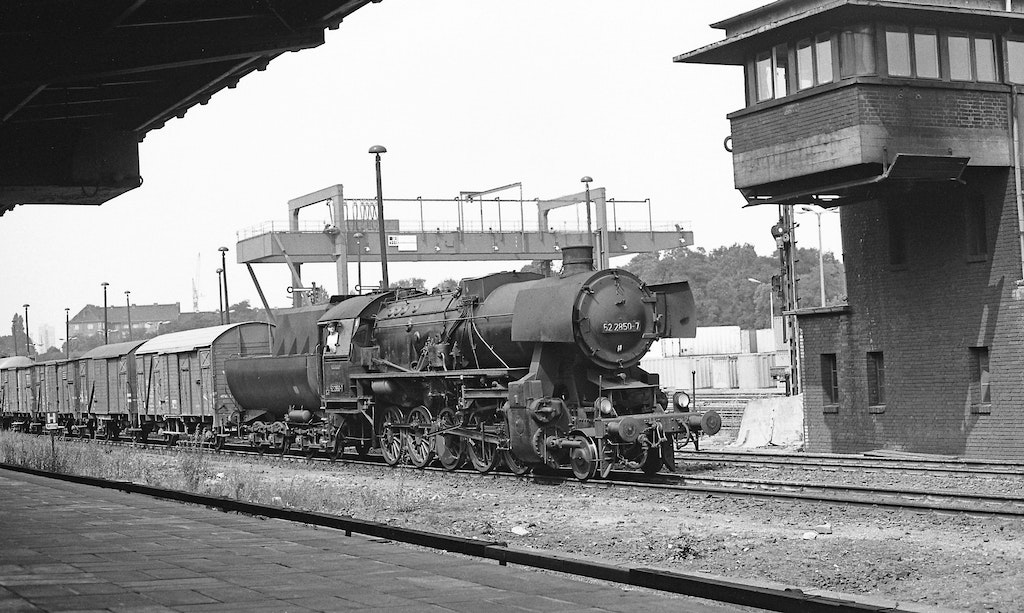 Important for the economy: freight traffic played an important role on the Ringbahn for decades. Here, a train with general cargo cars passes the Frankfurter Allee S-Bahn station. Signal box B2 was demolished in 2019, and the container station opened in 1969 was closed around two decades ago.
Burkhard Wollny 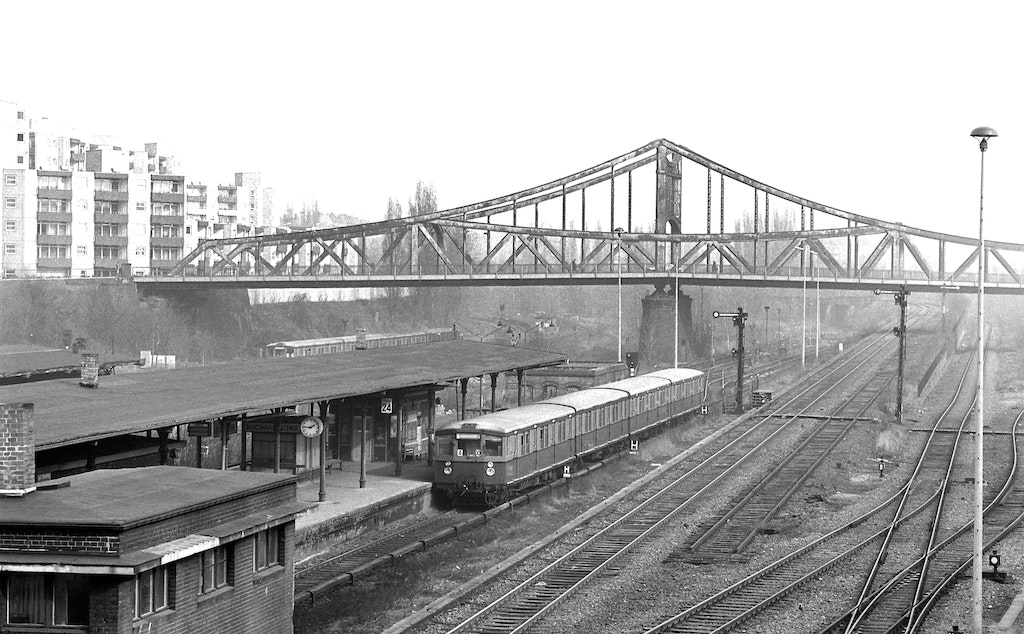 S-Bahn operation at Gesundbrunnen December 1979: From the Badstraßenbrücke bridge, the view falls on the tracks. On the platform, an S-Bahn train is just entering the reversing facility before returning to service. To this day, the 228-meter-long Swinemünde Bridge spans the station in the northern city center.
Hermann Kuom/Sammlung Sven Heinemann 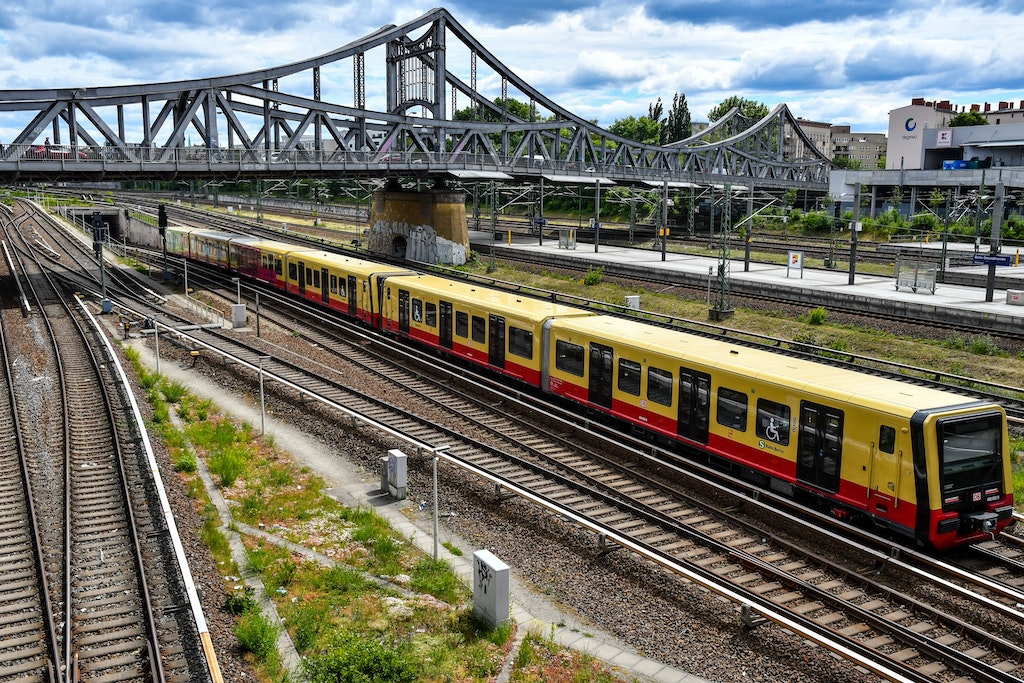 Gesundbrunnen today: A train of the 483/484 series, the new S-Bahn generation, is on a test run on the Ring in 2020.
Sven Heinemann 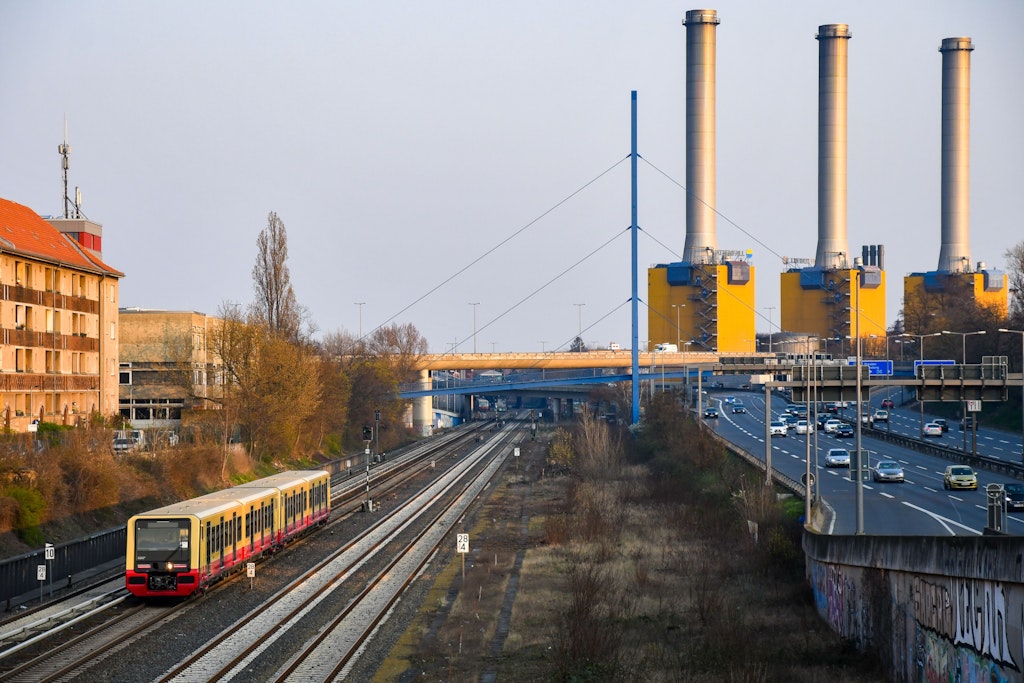 Along the city highway: A new S-Bahn train on a test run reaches the Hohenzollerndamm S-Bahn station. The rails of the siding to the Wilmersdorf power plant used to lie to the right of the track.
Sven Heinemann 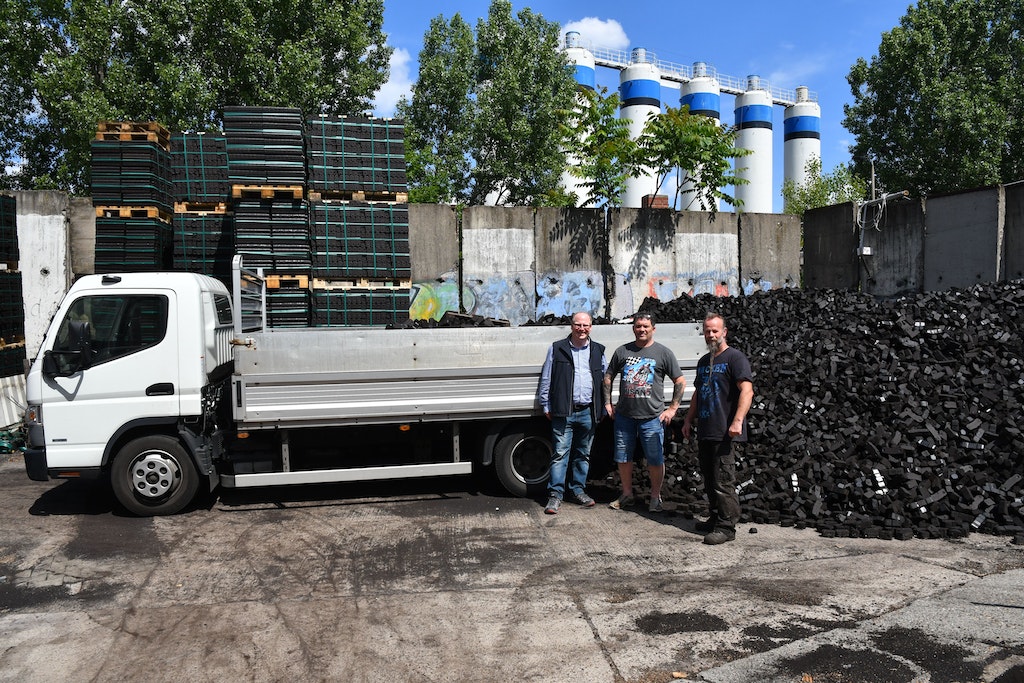 The last of its kind: Brennstoffhandel Helmut Braun, located on the site of the former VEB Kohlehandel Berlin on Greifswalder Strasse in Prenzlauer Berg, is the last company of its kind directly on the Ringbahn. Book author Sven Heinemann (left) with owner Arnd Teiche (right).
Sven Heinemann 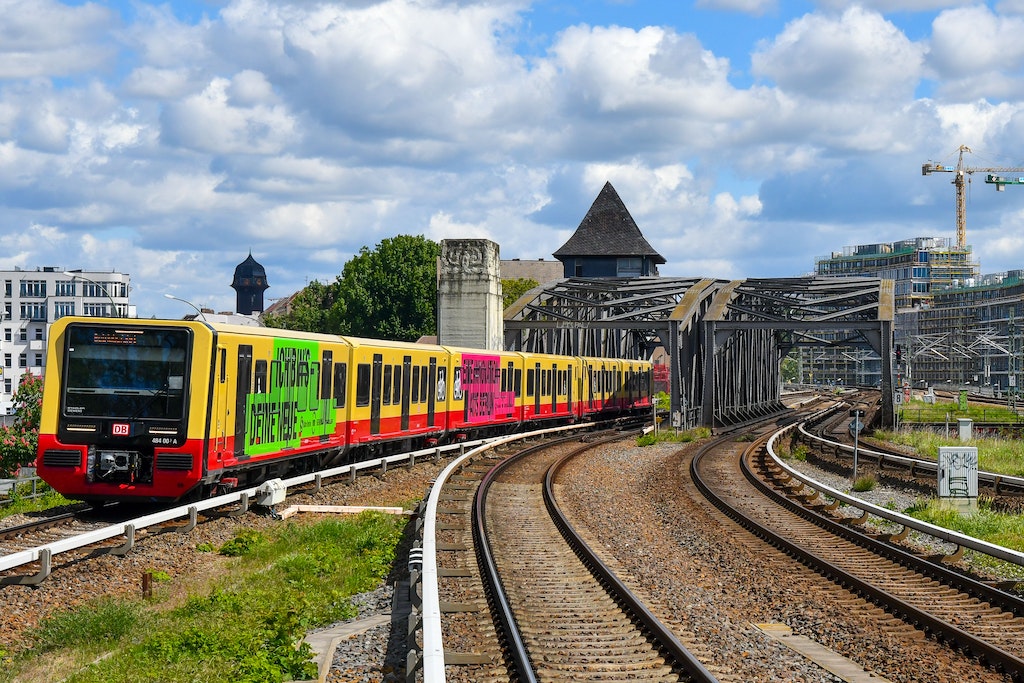 New and old: A new S-Bahn train, also without passengers, at Treptower Park S-Bahn station. The bridge over the Oberspree can be seen in the background. The river crossing was one of the first subprojects in the construction of the ring road in 1867.
Sven Heinemann 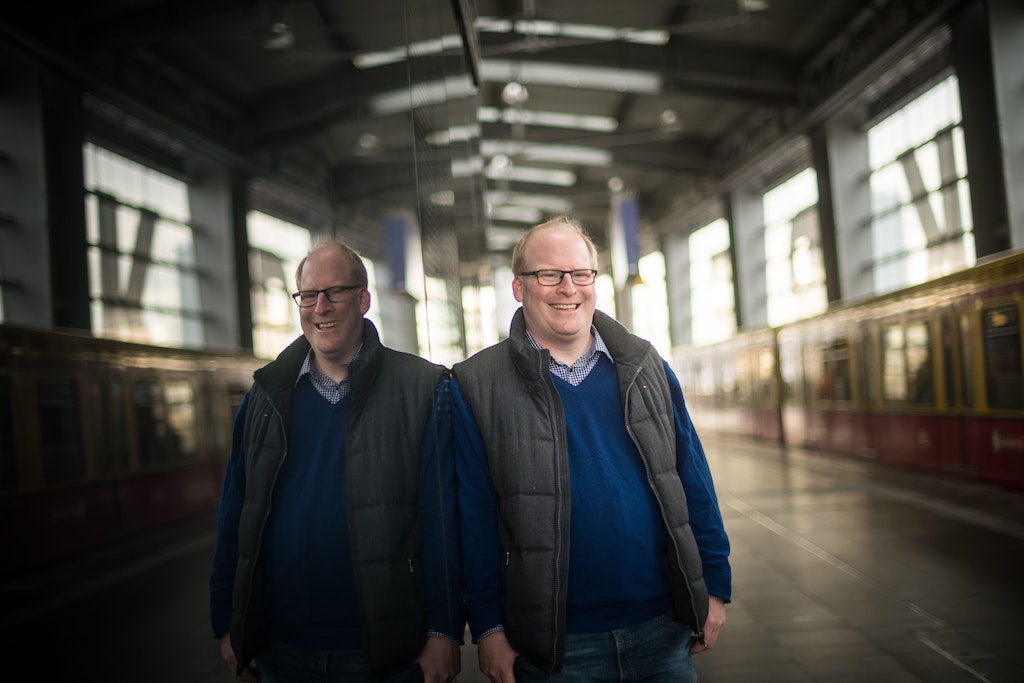 The author at Ostkreuz.
Stefanie Loos

The first lengthy section went into service on 17 July 1871, nine months late - a tradition most major Berlin construction projects have kept. Initially, only freight trains ran between Moabit, Rixdorf (today's Neukölln) and Schöneberg. Traffic was heavy from the start: "At least 23 trains per day," Heinemann says. Passenger service was added 1 January 1872. A few years later, a connection was made between today's Beusselstraße station and Schöneberg, completing the ring on 15 November 1877.

The total cost was eventually put at 28m Reichsmarks, but no one was cutting corners. Land around today's Ostkreuz, for example, was expropriated because the landlords of Boxhagen refused to sell. Long sections of the line were laid on embankments and viaducts so that road traffic could cross undisturbed. "They were farsighted decisions," Heinemann says. Such foresight would benefit current transport projects, he says. Heinemann is not only an author and social scientist, he's also a member of the Berlin House of Representatives. Budget policy is the SPD politician's metier and transport policy his soft spot. In 2018, his book, the Myth of Ostkreuz, was published, weighing in at 2.7kg.

But back on the Ringbahn: the planners' foresight quickly paid off. The Ringbahn became a main traffic artery in booming Berlin - and still is today. As early as July 1872, two pairs of passenger trains per day became eight, and demand continued to grow. By 1874, 1.4m passengers crowded onto the steam trains. Berlin grew without end along the line - and soon beyond. To cope with the rush, from 1910 onward, up to 14 passenger trains ran hourly on sections. "In 1910, the local freight traffic of all Ringbahn stations amounted to 4m tonnes," Heinemann says. Along the Ring, the railroad maintained about 80 operational sites and 27 train stations. Industrial sites also had their own connections.

Heinemann was especially interested in freight transport. There was a time that rail, rather than thousands of trucks, kept supplies moving in the megacity of Berlin. Near today's Paul-Heyse-Straße in Prenzlauer Berg, meat waste from the central livestock and slaughterhouse was loaded for later incineration in Rüdnitz-Albrechtshof near Bernau. And garbage was loaded onto trains at Forckenbeckstraße in Wilmersdorf. Not far away - at the Paulsborner Straße corpse collection point - many Berliners began their final journey. Coffins were hauled in freight cars to Stahnsdorf to the Southwest Churchyard. Alcohol also traveled by train; a line belonging to the Federal Monopoly Administration for Brandy in Tempelhof was in operation until 2003.

Even fuel came over the rails. The Neukölln gas plant was supplied with coal by rail until 1966, and the Danziger Straße gas plant until 1980. "There were estimated to be more than a hundred coal traders along the ring, several at almost every freight station," Heinemann says. Today, you can still buy coal on the site of the former Volkseigener Betrieb Kohlehandel, also located on Greifswalder Straße in Prenzlauer Berg - the last fuel trade directly on the Ringbahn: "But it is supplied exclusively by truck."


During his wanderings, Sven Heinemann also paid a visit to the property at Torgauer Straße 24-25 in Schöneberg. In 1939 Julius Leber, a Social Democrat persecuted by the Nazis, became a partner in the coal store there, and the business became a centre of resistance.

"The two small rooms in the questionable little house were a conspirator's den," Theodor Heuss, an FDP member and German president after the war, wrote in his memoirs. Leber was arrested at his workplace and executed in Plötzensee Prison in 1945.


A site of National Socialist tyranny was also the military ramp that stretches along the Putlitz Bridge in Moabit. The trains used by the Reichsbahn to transport Jews from Berlin to the concentration camps often departed from there. Starting in 1942 from track 69, at the heart of the largest deportation station in the city, some 30,000 people began their journey to their deaths.

There is still so much to tell about the Ring - for example, about the rail accident on the Nordring in 1922, in which 34 people were killed, according to the Vossischer Zeitung. About the time of electrification for the S-Bahn. About the construction of the Wall in 1961, when the Ring was also split. About the second gap closure in 2002 - only since then has the Ring been complete again.

Sven Heinemann's latest tome, Die Berliner Ringbahn, has 336 pages and around 400 illustrations. It's being published by Verlagsgruppe Bahn for €49.99. Heinemann has been working on it since 2018, mostly during parliamentary vacations and sleepless nights. He reviewed 11,000 images, including one of the oldest photos of the Ringbahn - artist Heinrich Zille took it in 1893.

"The book will be presented during a special tour on 17 July and should be in bookstores from 21 July," Heinemann says.  "The Ring is a brilliant idea."