Berlin's nicest subway station to open ahead of schedule

The Museumsinsel stop didn't open with the rest of the new U5 extension because of complications with construction.

Berlin - It was supposed to be fall of 2021. Then maybe late summer. And now it's mid-summer.

The Museumsinsel U-Bahn station, the third stop on the new section of the U5 that opened in December, will debut on 9 July. From noon, trains that previously zoomed through the station will now stop for passengers, Berlin public transport authority BVG announced Monday. Berlin's subway network will then have 175 stations.

The Museumsinsel station is considered one of the nicest in the city. It lies 16 metres under the Spree river and is close to the Humboldt Forum in Mitte. Inside, 6,662 points of light shine like stars in the midnight sky. They are the ends of light fibres that can be compared to a 1970s fibre optic luminaire. In his design, architect Max Dudler was inspired by a stage set that the famed Berlin architect Karl Friedrich Schinkel had created in 1816 for a production of Mozart's opera The Magic Flute.

The new section of the U5 between the Alexanderplatz and Brandenburger Tor stations is about two kilometres long and allows continuous service between Hönow and Hauptbahnhof. Trains don't currently stop at the station because its construction was particularly difficult.

Water not only flows above the station in the form of the Spree. H2O is also abundantly present below the station, which led to repeated delays, especially in the beginning. To keep the moisture at bay, construction workers had to freeze the ground - the biggest undertaking of its kind in Europe. The work required 95 105-metre pipes, known as lances, to be driven into the ground, construction company Implenia said.

The lances used a -37 degree Celsius calcium chloride solution to transform the ground into a 35-metre-wide, 105-metre-long block of ice in 80 days. Around 2,000 sensors monitored the temperature. The freezing made it possible to build in the area between the tracks where the platform was subsequently built. 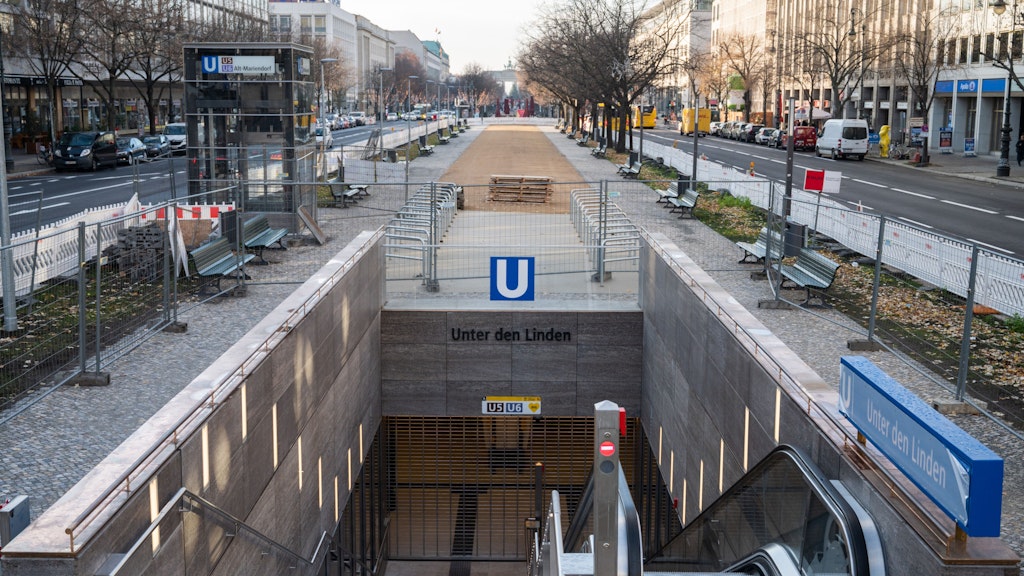 The tunnel had already been christened Lavinia the year before. Lavinia Frey is the programme director of the Humboldt Forum Foundation in the newly built Berlin palace replica, located adjacent to the station.

"We are delighted that we will soon be able to open this outstanding project for Berlin's transport system to passengers and visitors," said BVG CEO Eva Kreienkamp.