Public transport has yet to be the source of an outbreak. A TU study shows it's safe – if everyone masks up. 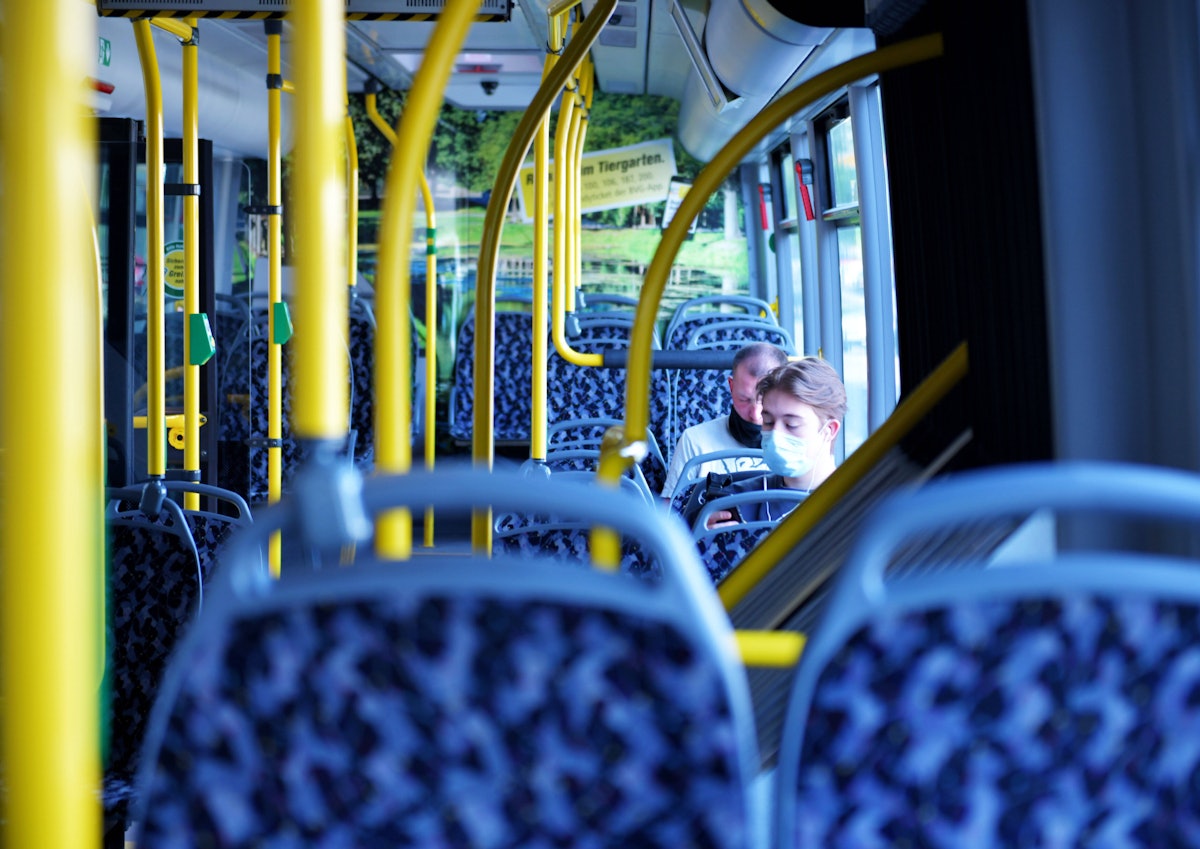 Can someone please explain why people think under the nose is OK?imago images

800 people have been kicked out of stations for refusing to wear a mask and 233 passengers produced certificates exempting them from wearing a mask – others have merely claimed having such a certificate because laws prohibit security officers from demanding to see the exemptions.

BVG security personnel have been able to issue fines since July 7 and officials expect the ban to remain in place for months. Evidence continues to grow that the face coverings – officially known as mouth-nose protection in German – are effective in stemming the transmission of disease.

“If I cover my mouth and nose, I reduce my risk of infection,” says Kai Nagel from Berlin’s Technical University (TU). Passengers not only protect each other by wearing masks, they also protect themselves.

Nagel and his team have presented figures that show masks can reduce the risk of infection by up to 95 per cent –  if as many passengers as possible wear them.

Although Nagel, a physicist, spent a great deal of time simulating systems comprised of many particles, he is now an expert in traffic planning and telematics, a field he has taught at TU Berlin since 2004.

His team has developed models that simulate the patterns by which the 5 million or so people in greater Berlin move through the city. The team uses anonymized mobile phone data to reconstruct movement patterns. Other models and current findings have helped the researchers calculate infection paths and risks – and to calculate the role of masks on public transport.

“I use certified FFP2 masks on public transit,” Nagel says. “My risk of infection is then reduced to a tenth.” With a fabric mask, it would at least be cut in half. “Both FFP2 and fabric masks filter out 50 per cent of the viruses on average.”

“It is also important that spaces are ventilated. This makes a considerable contribution to reducing the risk of infection. Our model calculations assume that there is standard ventilation,” Nagel says. “This is the case in public transport vehicles with functioning air conditioning.”

It’s different with subways, most of which don’t have air conditioning. As long as the trains are running and air can get in through open windows, the risk is lower than when the subway isn’t moving.

The risk of infection increases when passengers crowd on. “Then it’s all the more important that passengers cover their mouths and noses,” he says.

The results are good for the BVG since many residents have begun avoiding trains and buses out of a fear of contracting corona. Nagel and his team have proven that public transport is not a corona hotspot – as long as passengers wear masks.

An average 95 per cent of passengers wear masks, BVG spokeswoman Nelken says. During the hot days in August, the rate fell somewhat, but it remained high.

“Maybe some wanted to send a signal that they didn’t to be considered part of the anti-corona demonstrators,” Nelken says. Passengers have, however, said many BVG users don't wear masks outside rush hours – and staff ignores the transgression.

“One could think about whether masks would also make sense after corona, for example during the flu season,” says Kai Nagel.