Following Poland's near complete ban on abortion, volunteers are preparing to do more to help across international borders. 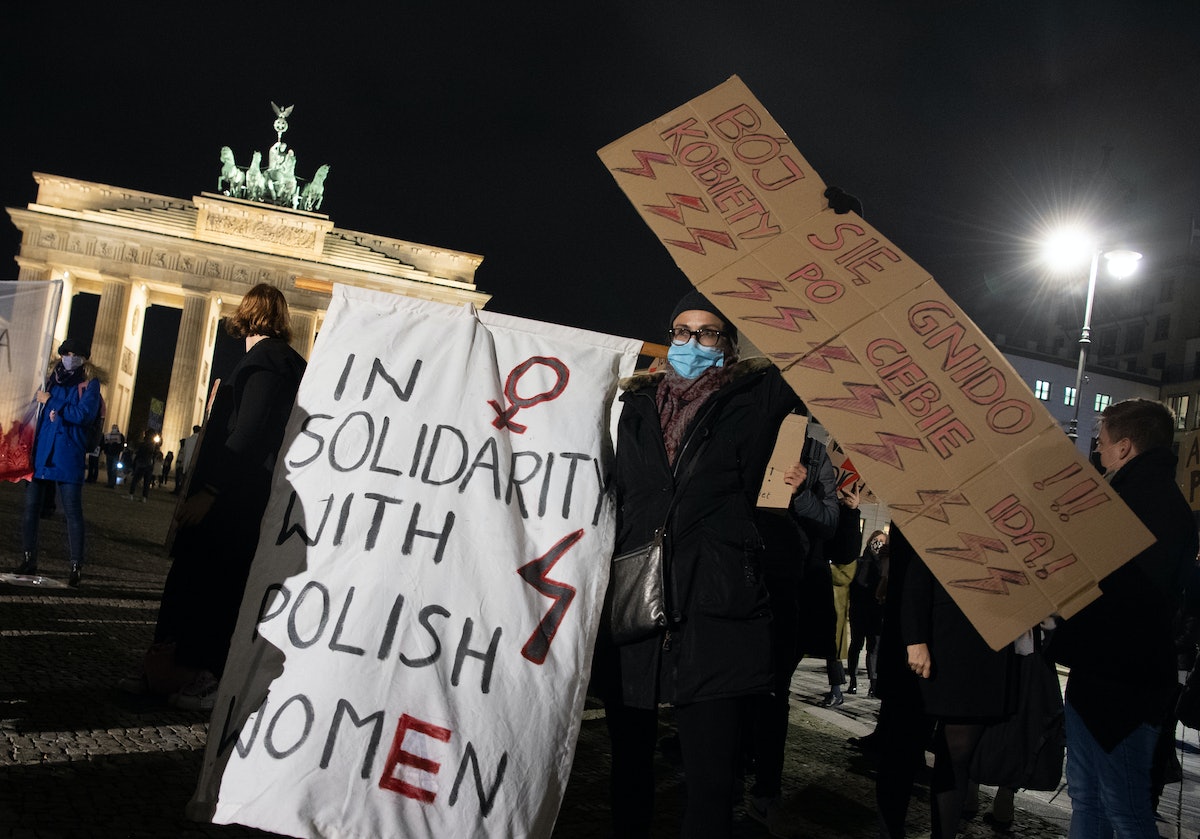 "Be afraid, you bastard! Women are coming for you!" reads a sign from a Berlin protest following Poland's controversial ruling on abortion.dpa

Berlin-Last week, a constitutional tribunal in Poland finalised a controversial legal ruling which has all but banned abortion in the country, sparking a week of furious protests. In the face of what were already some of the strictest abortion laws in Europe, Poles have been turning to Berlin for years in search of safe alternatives – and a volunteer support group that helps them now expects their numbers to increase.

Prior to the new ruling, abortion in Germany’s largely Catholic neighbour was only legal if a pregnant person’s life was in danger, she had been raped or was a victim of incest, or in the case of defects threatening the foetus’ life. The latter, which accounted for 98 per cent of abortions officially performed in Poland last year, has now been found unconstitutional. Doctors face up to three years in jail for performing an illegal abortion or providing patients with pills to carry out the procedure at home.

For those still desperate for a way out, organisations like Berlin’s Ciocia Basia (Aunt Basia in Polish) provide a vital lifeline. The project, comprised of a virtual network of volunteers, supports Poles through all stages of getting an abortion – whether that is through helping them safely obtain pills to use at home, or organising a trip for an abortion abroad.

Volunteer Zuza Dziuban is a cultural scholar currently based in Vienna but who first got involved with Ciocia Basia around three years ago. It was the experience of a friend from home in Poland that prompted her to become active in the fight for abortion rights: “She didn't know what to do – in the end, she managed to get abortion pills and she had an abortion at home alone.”

“There was so much uncertainty and anxiety on her side, and she was so alone, just being on the phone with me through the process. That experience made me realise that this simply should not be the case.”

Most of the time, Ciocia Basia directs those in need to partner organisations like international non-profit Women Help Women, who send them safe pills for a home abortion. However sometimes, due to how far along the pregnancy has advanced, a surgical procedure is required – so Zuza and her fellow volunteers make arrangements for clients to travel to Berlin for the termination.

Zuza says they are “too busy to be counting” how many people they assist with abortions – they are typically contacted by “several dozen” people every day via phone, email or social media. But the impact of the tribunal ruling is already clear.

“We can definitely see the anxiety, fear and rage this has created from day one,” she says. “We instantly had many more people calling asking about the ways we can help, even if they are not pregnant, or from people who are receiving the results of prenatal tests in the next few weeks.”

“Last year there were around 1,000 abortions performed based on foetal abnormalities, so now 1,000 people a year, more or less, will have to be accommodated by support groups abroad. We do expect the numbers to increase drastically, and it’s a lot of additional work, but it is also something that we are ready and of course willing to do.”

Volunteers already faced a huge rise in demand this year as a result of corona virus, with economic hardship and uncertainty for the future driving increased numbers to seek an abortion. Ciocia Basia has helped at least 90 people come to Berlin for abortions since the start of the pandemic, while they have helped hundreds obtain pills.

Rapidly closing borders across Europe also presented the group with a huge challenge, but they were able to find ways around international travel restrictions - a confirmation from a doctor that someone is travelling for an urgent medical procedure proved enough to secure their clients’ routes to Germany.

Ciocia Basia is part of the international Abortion Without Borders network, which also helps Poles travel to the UK and the Netherlands for abortions. So far, AWB has only worked with two people who were unable to travel abroad due to the pandemic.

Foreign patients seeking an abortion in Germany have to pay for a private operation - but the group ensures that money is no obstacle for anyone that comes to them for help. For those without the financial means to cover their own medical and travel costs, private donations and funding, including from UK-based charity Abortion Support Network, help bridge the gap. Volunteers also attend appointments with clients, sometimes acting as translators, and offering them a place to stay - many travel to Berlin alone.

“Apart from the money, the stigma is the biggest obstacle,” Zuza says. “People are very stressed and anxious when coming to Berlin … But this is not related to abortion being a problem, the stigma is what drives people to go through this without telling their friends or relatives or even their partners.”

Even obtaining legal medication like the morning after pill can be difficult in Poland, because a doctor or pharmacist may refuse to prescribe it on the basis of their own conscience. Because of this, volunteers also buy supplies of these pills in Germany and send them to activists in Poland who distribute them within the country.

By now, Ciocia Basia has identified and works with a network of doctors and medical practitioners who are sympathetic to their cause - and sometimes speak Polish. “It’s a long process of finding the right people and establishing trust, but they're out there, and you’d be surprised how many politically engaged doctors are willing to accommodate all the people coming from Poland. We’re incredibly grateful to them,” Zuza says.

The practitioners Ciocia Basia work with typically charge around €400 - but some unscrupulous German doctors exploit Poland’s legal situation to try and turn a profit. Zuza says some clients originally got in touch with the group seeking financial support after speaking to doctors demanding as much as double that price.

“It’s very disturbing but this is a phenomenon that cuts across all realms of access to abortion,” Zuza says. “It starts with websites in Poland that offer pills that turn out to be a placebo or vitamin D, and people pay for those fake pills.”

“There are also fake clinics in places like Slovakia where they ask you to pay in advance and promise to pick you up and drive you to the clinic, and then nobody shows up… those doctors are just one element of the disgusting network of people exploiting people in unwanted pregnancies and their precarious legal situation.”

The people who come to Ciocia Basia seeking help are not a homogenous group - and volunteers never ask why anyone that comes to them is seeking an abortion. “There is a class dimension to it, because those who are in more underprivileged positions who don’t have the economic means are those who most require our help,” Zuza explains.

“But we’ve seen for years now that there is no a specific type of person - it can be people from all possible backgrounds: it's teenagers, it's young students who don’t want to be pregnant because they want to pursue their careers, it’s often mothers who already have several kids and decide having any more is not right for their family.”

Poland's recent constitutional ruling has sparked displays of solidarity throughout Europe, including in Berlin.dpa

As a feminist movement, they also acknowledge that abortion access is not just an issue affecting cisgender women, and prefer to use gender-inclusive language. Zuza emphasises that last week’s constitutional ruling has followed a “wave of oppression” against LGBTQ Poles, with a string of towns across the country declaring themselves “LGBT-free zones”.

Berlin has become the preferred destination for Poles seeking abortion abroad due to its proximity and the low costs of getting an abortion compared to other places in Europe. With a cut-off point of 14 weeks, Germany doesn't have Europe's most liberal abortion laws - for a later termination, AWB helps clients travel to the UK and the Netherlands, where termination limits exceed 20 weeks - but these inevitably carry higher medical and travel costs than Berlin.

Patients in Germany also have to have a counselling session before having an abortion. Some centres approved for abortion counselling are run by religious groups, leading some to fear being judged or talked out of their decision.

Despite these hurdles, Zuza says she and other volunteers feel they have an obligation to use the privilege granted by Germany’s less strict laws to help Poles who have lost almost all right to choose. She adds that for many who travel to Berlin for an abortion, the process can often be “illuminating”, offering open conversations around reproductive health some may never have had before.

Since the ruling, protests have erupted across Poland with mass demonstrations on the streets and a Women’s Strike taking place on 28 October, piling pressure on the country’s leaders to reverse the court’s decision. More groups like Ciocia Basia are springing up across Europe, as well as solidarity demos, including in Berlin.

Mass protests and walk-outs in Poland had previously stalled the ruling several times since it was first proposed in 2016 - and Zuza calls what is happening now a “revolution” that has taken politicians by surprise.

The key step now for Ciocia Basia and its sister organisations is to let Poles know they are there and ready to help. At the demonstrations in Poland, protesters have chanted Abortion Without Borders’ phone number. “It's incredibly important that there is knowledge in Poland about organisations such as ours, which instead of exploiting actually help financially - people have the right to avoid being exploited by these men who are trying to make money from this.”

So far, spreading the word seems to be working – there has been an influx of people contacting Ciocia Basia offering their support as volunteers or providing accommodation, and supporters have donated €12,000 in the week since the ruling.

Following the shock of the court’s decision, and despite doubt over how Poland’s anti-choice politicians and parties will choose to react to the protests, Zuza says the shows of solidarity from Berlin and across Europe are cause for optimism.

“It's really empowering and beautiful – and watching the news from Poland, it makes us believe that this will be okay. Together, we can make it.”

More information about Ciocia Basia’s work is available on their Facebook page. Donations can be made via their GoFundMe.