Comedy Café in Neukölln: Laughing through the pandemic

Josh and Noah Telson operate one of the city's few English-language comedy clubs. The worst part about corona - other than corona? The uncertainty.

Berlin - It's hard to tell if Josh Telson is happy or dejected. Probably a mixture of both. Telson helps his brother run Comedy Café Berlin at Roseggerstraße 17 in Neukölln. They decided to close the club for months. Because of corona. They reopened last weekend. "With a big bang!" he said in the run-up to the reopening. His eyes flashing briefly.

So why the worried look? The past 15 months have been difficult, he said. And the future is uncertain. Telson, who is in his mid-thirties, looked forward to reopening. They've installed an extra air filter so that the windows can remain closed and shows can continue after 10pm. But he's also currently only allowed to have 26 people in the performance space. "Before the pandemic, we had about 70 people in the room."

Telson's father is American and his mother is German, and he's going through what so many other theatre operators in this city are experiencing. Without government aid, they would have had to close the English-language comedy club long ago. "In the US, where no one can count on government help, there are many legendary comedy stages that no longer exist. No one knows if they will ever reopen. It's pretty depressing. The world is not like it used to be." For the Telsons, the situation is tense, in part because the club and performers specialise in improv comedy. So connecting with the audience is especially important, he said. The performers respond to cues from the audience. "We interact with other people on stage, so online performances just don't make as much sense. We need the contact with the audience."

Is another lockdown looming?

Improvisational comedy originated in the US, much like stand-up comedy. There was no English-language improv scene in Germany 15 years ago, he said. But today the genre is an integral part of the performance world here, especially in Berlin. Before the pandemic, there were shows almost every day, Telson said, including in English. "A lot of comedians settled in Berlin, so there was a lot of comedy diversity." There is now the Mad Monkey Room in Prenzlauer Berg, Cosmic Comedy Club in Mitte or the now almost legendary English-language comedy series We Are Not Gemüsed, he said. "German comedians have copied many techniques from their English-speaking counterparts, so the scene has been able to develop broadly and well."

But corona turned the genre on its head, he said. Many artists didn't want to perform online. Some changed professions and other (mostly English-speaking) performers returned to their hometowns, Telson noticed as he put together the programme for the coming weeks. To be sure, performers were quickly found who wanted to be on stage. "But the list didn't fill up as quickly as it used to."

Telson's biggest fear is October. "My biggest fear is that we'll have to close again in the fall." When he looks at his situation, he feels that piercing sense of trepidation and hope again. On the one hand, he appreciates that German politics - and Berlin's culture senator - support small stages so vigorously. On the other hand, he feels left alone by politics and its decision-makers. "We have no contact with the Berlin government. When we were allowed to reopen in the spring, we got the information five days before the actual opening date. The big theatres are treated differently. We have no way to plan. The unknown is the worst."

It's extremely frustrating to have to cancel shows and disappoint audiences and patrons in the process, he said. For the next few weeks, at least, the club owner knows he's allowed 26 people into his club per show. That's seven more people than last year. One could also ask: Why only 26? Why are so few visitors allowed into his club when they have to check test and vaccination papers anyway? Josh Telson is sympathetic. "I think the problem is with the Delta variant. People who are vaccinated can become infected and continue to carry the virus. So we have to keep the numbers in the audience limited, despite the vaccinations. I understand that." What Telson doesn't understand is the lack of information, transparency, opportunity. No one has explained the reasons for the rules, he said. Telson is just winging it, he said. He would appreciate more information, even though he fully respects and understands the measures. 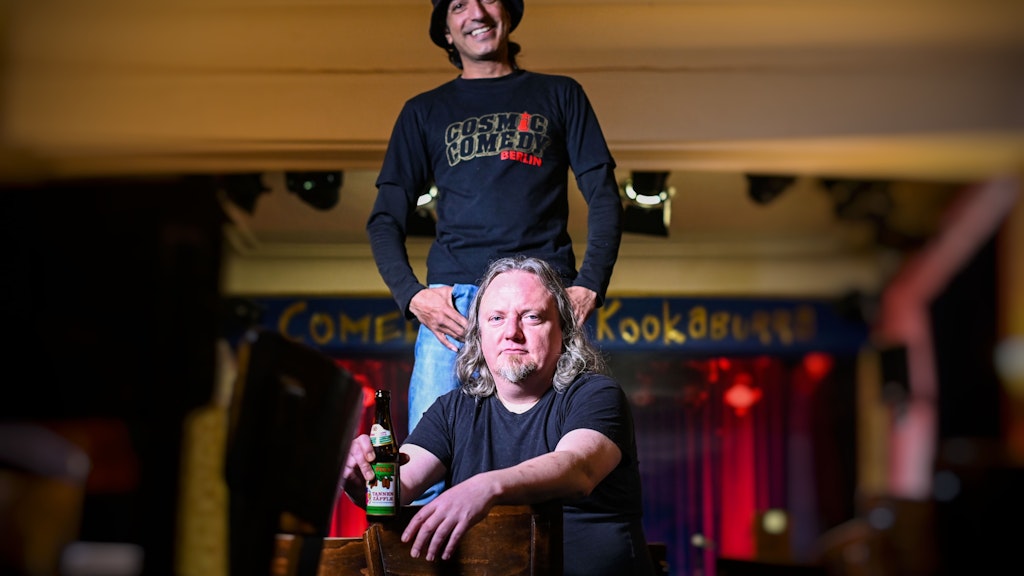 You can feel the uncertainty swirling around him. "Two souls reside in my chest: on the one hand, I want everyone in my club to be safe. I myself had corona and didn't have such a mild illness. So I really don't want anyone to catch the virus because of me. On the other hand, I'm a theatre person. If we follow all the rules, can't we maybe have more than 26 people in the room?"

For now, however, joy prevails. Telson is psyched to see shows on his small Neukölln stage again. For August he's planned three performances per week. In September, he wants to expand and offer more events. People can book improv courses again and be taught the craft by professionals.  Despite the harsh times, Telson doesn't want to leave the fun of his job by the wayside.