"Culture has had a lot more support in Germany"

British sound engineer and Labour politician Olga FitzRoy – who grew up in Berlin – talks about how Germany and the UK have handled the pandemic – and of course Brexit. 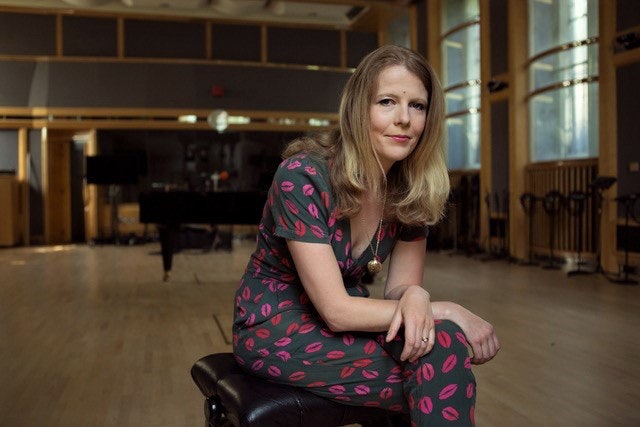 Sound engineer Olga FitzRoy, who was born in Berlin, was recently back in town for a recording project with a British composer, says the British cultural scene has faced a "devastating" impact from coronavirus.AIR Studios

Berlin-Olga FitzRoy can still remember being at the centre of a historic moment when, as children, she and her brother stood on the remains of the Berlin Wall in November 1989.

Now a highly accomplished sound engineer and recently back in Berlin for a recording job, she has had a front row view of the fallout from another historic moment – the coronavirus pandemic. And her view is clear: the music industry and the arts as a whole have fared better in Berlin – the city where she was born and spent the first eight years of her life – than in London.

"In Berlin people are still able to earn a living, whereas the musicians I record with in the UK are incredibly grateful to be recording because that's one of the few things they can actually do," she told us. Live concerts are now allowed again in the UK, but few have actually happened due to social distancing restrictions and audience caps – so UK performers face a black hole of work opportunities, as well as a national testing system struggling to meet demand.

"That contrasted wildly to what I was getting from the players in Berlin," Olga continued. "A lot of the people that played in our sessions work in the orchestras in Berlin and in the opera, and they said that the opera people get tested virtually every day. In the UK key workers can't even get tested at the moment. There seems to be a huge, huge disparity with the availability of tests."

She describes the "devastating" impact the virus has had for UK musicians, which has forced many to consider a career change.

"Every time I see someone at a session, half of them tell me that they're considering leaving the industry – they don't know how they're going to pay the rent or pay for childcare, because so much of their income is dependent on live."

She feels both individual artists, like the 60 orchestral musicians she worked with at Teldex Studio in Steglitz last week, and the German cultural sector as a whole, have had “a lot more support” than their UK counterparts.

Photo: Carys Lanvin
Olga FitzRoy
was born in West Berlin to a German mother and Scottish father and lived there until 1990. She is a mixer at London's AIR Studios, founded by legendary Beatles producer Sir George Martin. She has worked with bands like Coldplay, film composers including Hans Zimmer and on the London 2012 Olympic Closing Ceremony. She is executive director of the Music Producers Guild and was its Recording Engineer of the Year 2016. She was a parliamentary candidate for the Labour Party in the UK 2019 general election.

But why have live performances in Germany resumed so much sooner than in the UK? Covid guidelines in the UK make rehearsing difficult, and have affected recording sessions too - the recent Teldex sessions ended up happening there because social distancing requirements mean even big London studios like Abbey Road didn't have room for the 60 players required by composer Dani Howard.

Olga says levels of state financial support for the arts prior to the pandemic also set a precedent. According to UK performers’ union Equity, UK public spending on the arts in 2018-19 was around £2.1 billion compared to Germany’s £10.6 billion (€11.9 b). That works out as £31 per capita in the UK, and £131 in Germany.

Emergency funding during the pandemic has differed too. In March, German culture minister Monika Grütters announced a €50 billion package to support small businesses and freelancers including artists and musicians. It took until July for the UK government to launch a £1.57 billion arts support fund.

Even now, it’s still unclear which British organisations were successful in the first round of grants from that fund. "Although it's obviously great that they've announced this package, it's taking so long to reach people," Olga says. "You hear stories of theatres closing and thousands of redundancies in the cultural sector – and it's really because they've [the government] been incredibly slow to act."

She thinks it's "crazy" that the UK government hasn't fought "tooth and nail" for the arts sector, which constitutes a substantial part of the British economy.

The future of job retention schemes will also have huge significance for the arts, Olga says. German labour minister Hubertus Heil wants to extend the Kurzarbeitergeld subsidized furlough scheme until March 2022 – but the UK furlough scheme is due to finish at the end of October, with freelance support ending in August.

As executive director of the Music Producers Guild, Olga knows just how many people that affects in the UK music industry. "There's still a huge number of freelance jobs which physically can’t happen at the moment," she says. "Those people have either had the support finished or they didn't get any in the first place – about a third of MPG members were not eligible for any support. I think the government still hasn't fully understood the nature of how people in the cultural sector work."

And even if Covid couldn't stop an international project like the sessions at Teldex, Olga is concerned Brexit soon could. She wants to see exemptions for touring musicians from any travel restrictions in the UK’s exit deal – if there is one.

"Music is collaborative – you can't just do it in one place with one group of people," she says. "Traveling and working in Europe provides opportunities for musicians, composers, engineers to work with other people, for musicians to have gigs, and if it's going to cost them thousands of pounds in admin to get visas, those sorts of opportunities are just not going to be there for them."

Olga doesn’t just talk the talk on politics. She ran for parliament in the UK’s 2019 general election representing the Labour Party, which ultimately faced a resounding defeat to Boris Johnson’s Conservatives. The election’s buzzword was Brexit, and no-one could have known that the victorious government would soon have an unprecedented global pandemic on its hands.

But she's not surprised by how Johnson’s government has handled either issue: "I think Boris Johnson's never been a details person. He’s obviously quite ideologically driven, but it's baffling that even in the midst of a huge pandemic and an economic crisis,  they seem hell bent on a hard Brexit and not really concerned about the economic consequences. It’s quite worrying."

The arts sector isn't the only thing Olga feels Boris and co. have mishandled during the pandemic. A mother to a four-year-old son, she volunteers with UK maternity discrimination charity Pregnant then Screwed – they have announced plans to take British chancellor (finance minister) Rishi Sunak to court over his support scheme for the self-employed, which leaves women who have taken maternity leave in the last three years entitled to less money than their male partners.

Looking back to Germany, Olga feels that overall, the pandemic has been handled better here.

“When I talk to people, they say, ‘Oh, there’s still been U-turns and mistakes by the government’, but I think the magnitude of the mistakes has been a lot smaller in Germany. They’ve been quicker to change and make adjustments – as far as I understand it, they haven’t gone down to really specific things like "we have to open golf courses this week", which the UK has, as a priority over day-to-day things."

“I think there has been a much more even-handed approach in Germany – people are not without criticism, obviously, mistakes have been made – but I think it's been a lot more crass in the UK."