US election : Democrats Abroad protest quietly as vote count continues in the US

A handful of Americans gathered at the Brandenburg Gate to press for voter protections. Donald Trump was there too, sort of.

Berlin - Standing at the edge of about 40 stunned US Democrats and just as many journalists, Gerd Lindner seemed the only supporter of President Donald Trump midday Wednesday at the Brandenburg Gate.

“He’s a showmaker and he knows how to present himself,” Lindner said, clutching a near-life-size cardboard cutout of the real estate magnate, media star and arguably most powerful politician on the planet. “Whenever he’s beaten down, he gets back up.”

The crowd was gathered for a rally organised by the Berlin chapter of Democrats Abroad to protest in favour of having all ballots counted in the US election. Although the protest was planned weeks before Tuesday’s vote, it came just hours after President Trump said no votes should be counted after 3 November, election day.

Several Democrats Abroad board members spoke about votes and the environment during the gathering and regularly received applause as cameramen zoomed in and out of the small, socially distanced crowd.

Lindner, wearing a Rolling Stones mask, was ignored by reporters and participants but was popular with photographers – he also had a Halloween mask of The Donald.

“Every president before him started a war,” Lindner said. “He’s the first president who didn’t start a war and there was never as few unemployed as under his power.”

Lindner, who spent “several years” in Florida, said he has been a fan of President Trump for about 15 years but can’t vote for him because he’s a German citizen.

The Americans gathered were reserved and quietly tried to understand the lack of a decisive victory by both the Biden/Harris ticket as well as the various congressional races in Tuesday’s election. 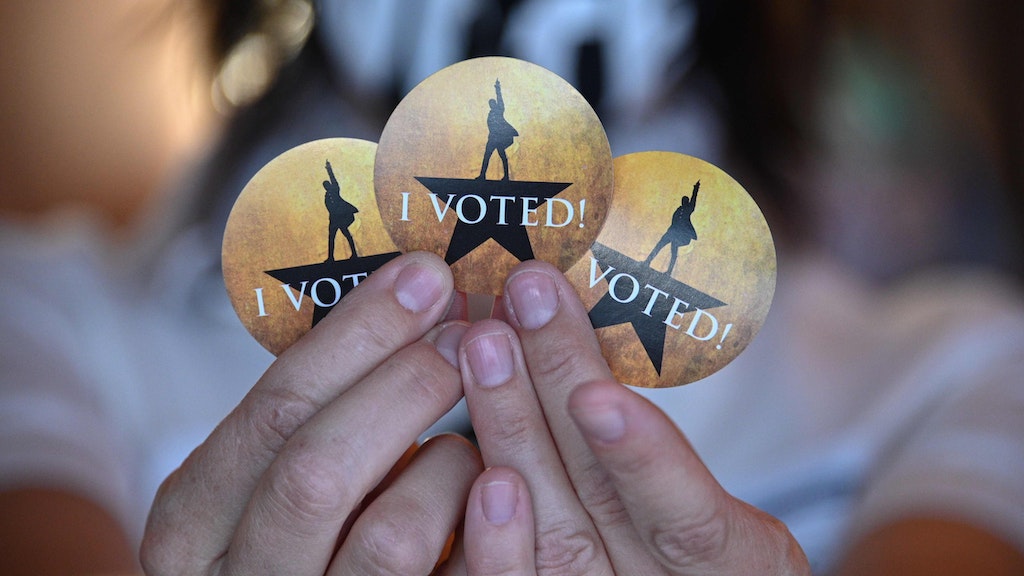 “I was shocked that Trump seems to have more votes than he did in 2016. I don’t understand it. I don’t know a single person who voted for Trump,” said Pam Selwyn, who has lived in Berlin for 38 years and votes in California.

The demonstration was originally to be held in front of the US Embassy on Pariser Platz but police asked the organisers to relocate to the Tiergarten side of the Brandenburg Gate to ensure social distancing – while most gatherings are prohibited because of corona, demonstrations of less than 100 people are exempt.

A single policeman monitored the proceedings.

“A lot of Trump supporters seem to be saying it’s the economy,” said Isabel Cole. “I think there are also groups of people who don’t like the lockdown.”

She said many may have voted against Biden for fear of a lockdown that could ruin their business – they would prefer to stay open and risk infection: “In the US it’s not like in Germany where you have the lockdown and there’s a good support system. In the US, for people who have to shut down their businesses, there’s no support system.”

After the speeches finished, participants and journalists began to wander off.

As did Lindner and his Trump.

How do I get vaccinated in Berlin?

We've got the basics on getting vaccinated against the coronavirus/Covid-19 in Berlin.