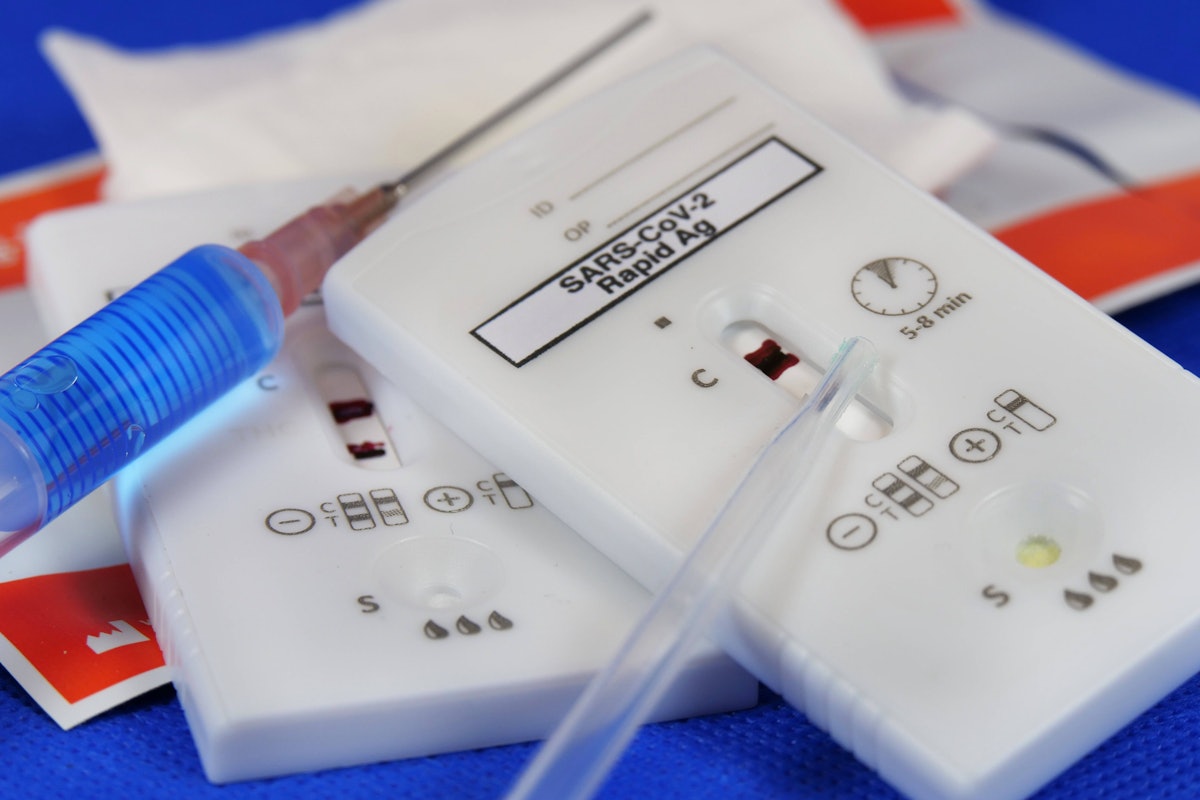 These little guys are set to be the next big thing in Germany's anti-corona strategy.Imago/Martin Wagner

Berlin-They've been a hot topic for months - and now quick corona self-tests have been officially approved for home use in Germany. Politicians see them as a major component of the country's testing strategy going forward. Many experts have long agreed that rapid tests can be performed by people other than doctors and trained medical professionals - although proper preparation and handling of the tests is needed. Here's everything you need to know about the plans to roll out Schnelltests against Covid-19.

Why are self-tests now available for home use?

Germany's Federal Institute for Drugs and Medical Devices (BfArM) granted the first three special approvals for corona self-tests on Wednesday. Around 5o manufacturers have submitted applications, according to the BfArM - so we'll soon have a wide selection to chose from.

The German health ministry's amendment of the Medical Devices Dispensing Ordinance at the beginning of February laid the way for corona tests to also be dispensed to individuals. Previously, only doctors, pharmacists, employees in testing centres or other medical professionals were allowed to use such tests.

For special approval by the BfArM, self-tests must meet certain requirements, according to the Paul Ehrlich Institute (PEI). For example, applicant manufacturers must provide information on the specific Sars-CoV-2 antigens, i.e. the protein fragments of the virus that are detected by the test. The instructions for use must be in German, and the tests must also be easy to use. In addition, manufacturers must guarantee that they can supply an appropriate quantity of tests in Germany. Medical devices that do not have a CE marking can be permitted by the BfArM for a limited period of time as an exception. This is an assurance from manufacturers that their tests comply with European protection and quality standards.

How can self-tests help against corona?

The idea of rolling out self-tests, which can take as little as 15 minutes to produce a result, is that broad testing with a low threshold for eligibility will break chains of infection quickly. In Germany, it still takes several days for a person to be tested for corona and contacted with their result. During this time, an infected person is usually not in quarantine and may come into contact with others.

Home testing means people can test themselves quickly and, more importantly, regularly to detect infection early - even if they have minimal symptoms. For example, individuals can take a test before a visit to their family, a trip to the cinema or a hairdresser's appointment - protecting others if they test positive.

However, a negative test result does not provide a total guarantee - it only offers a snapshot of a person's Covid status, and is valid for no longer than the day the test was performed. The next day, the result may be completely different - possibly because at the time of testing, the testee was just before the infectious phase, in which their viral load is still below the detection limit of the rapid test. Therefore, self-testing is not a substitute for corona protection measures: regular hand washing, social distancing and wearing a mask.

Where can I get a self-test?

Home tests should soon be available for purchase virtually everywhere - in pharmacies, supermarkets, drugstores and online. It remains to be seen how quickly providers can deliver supplies - as well as how demand and prices develop. Health minister Jens Spahn (CDU) wants to decide whether tests will come at a subsidy or whether everyone will be entitled to a number of free tests. Whether a test will cost €1.99 or €8.99 at a discount store will make a decisive difference.


For the time being, manufacturers are keeping quiet about when exactly the tests will be available. In Berlin, manufacturers have said they should be available from mid-March - "shortly", as Siemens Healthcare put it. In the first phase, orders will be managed by the federal and state governments: "Currently, we are in talks with pharmaceutical wholesalers, so that the test will then be widely available in the course of March." Manufacturer Technomed expects only "a few more days" until the tests are on the shelves, CEO Moritz Bubik said in an interview with ntv.

When should I do the test?

Self-tests detect viral proteins, or antigens, even if no symptoms are present. The tests are sensitive enough to detect infectiousness at an early stage, which is already present to a relevant degree two to three days before the onset of symptoms. It is most pronounced on the first day of developing symptoms. Thus, the self-test could be used to identify asymptomatic individuals or those with minimal symptoms before the peak of their infectious phase. People who have a high viral load and are highly infectious can be identified more quickly by self-testing than those with a low viral load.

What kind of rapid tests are there?

Swab test: In this test, a long swab is used to take a sample from the nose or throat. To do this, the swab must be inserted very far into the nose or in the oral cavity behind the uvula - which can be pretty uncomfortable and even painful. Tests are currently being conducted as to whether a nasal swab alone is sufficient, which would be a much more comfortable option.

Saliva test: To make testing easier, research is being conducted into options that would require spitting into a tube or sucking on a stick like a lollipop.

Gargle test: This involves a special liquid - often a saline solution - being gargled for between 30 seconds and a minute to loosen particles from the throat. Afterwards, everything is put into a tube and the sample is examined. Gargle tests are already being used in schools and daycare centres in Austria: in a pilot study of more than 5,000 students and teachers in Vienna, the tests yielded similar results to throat swabs, according to microbiologist and study leader Michael Wagner of the University of Vienna.

We're not back in the 80s, this is a test "cassette" - displaying a negative result for corona.
dpa/Nicolas Armer

How do the rapid tests actually work?

The three antigen self-tests approved to date all work in a similar way, requiring swabs from the nose and/or throat. These are:

A test kit usually contains several components, including a test cassette, liquid solution, swab sticks and tubes. Depending on the test, the swabs must be inserted either very deeply into the nose or throat to take samples. Some manufacturers also require a swab from the front of the nasal cavity. Drops of the liquid should then be placed in a tube and the swab carefully turned in it before being dropped onto the test strip in the cassette. Results are available after 15 to 20 minutes for most tests. Two dashes on the cassette display indicate a positive result; one at C means negative, and one at T invalid.

Tips for doing a self-test:

How reliable are the tests?

There are two important criteria when it comes to the reliability or safety of rapid tests: sensitivity and specificity. The former indicates how reliably the test identifies infected persons as such. This is determined by the virus concentration in test samples. Specificity concerns whether the test successfully identifies non-infected persons as healthy.

Rapid antigen tests are considered less sensitive than the standard PCR lab test. However, according to Rapidtests.de, a volunteer initiative of scientists, two peer-reviewed studies in the scientific journals Science and Jama have shown that rapidity and regularity are more critical than test sensitivity. Rapid tests are capable of detecting infectious individuals more specifically than a PCR test precisely because they are less sensitive, i.e. they detect only high virus concentrations, according to the site.

In Germany, only self-tests with a specificity of more than 97 per cent are approved, according to the PEI. That is, 97 out of 100 non-infected persons must be detected as such. The sensitivity should be greater than 80, which means the test must detect 80 out of 100 infected persons. The products approved so far by the Federal Institute for Drugs and Medical Devices have a specificity of 99 to 100 per cent, and a sensitivity of 96 to 97 per cent, according to their manufacturers.

What should I do if I get a positive result?

According to the Robert Koch Institute, a positive result from a rapid test is only considered a suspicion of infection - a PCR test must still be done to confirm diagnosis. Anyone who tests positive after this should immediately isolate themselves and quarantine independently, avoid contact with others and contact their family doctor, on-call health insurance service, a testing centre or their local health department (Gesundheitsamt) by phone. It isn't yet known whether it will be mandatory to report a positive Schnelltest result should you get one.

The scientists behind Rapidtests.de see the self-tests more as a measure to relieve the strain on PCR testing capacities. A broader testing strategy involving rapid self-tests would eliminate the need for many of the PCR tests which ultimately produce negative results - a negative antigen test for early mild symptoms would be 97 to 98 per cent correct. A second negative antigen test the next day almost completely rules out a Covid-19 infection, so unless a person's symptoms develop further, PCR testing would no longer be necessary.

The PCR tests saved could therefore be used to confirm positive home tests if necessary, Rapidtests.de continues. The scientists think it would make sense, especially at the beginning of the wider rollout of antigen tests, to randomly check positive specimens with PCR tests, thus examining their reliability.