The resignation is seen as a tactical move to get the controversy out of the way well ahead of September's election.

Berlin - The leading candidate to replace Berlin mayor Michael Müller (SPD) after September's elections on Wednesday resigned her post as Germany's family minister amid a flare-up in a months-long scandal about alleged plagiarism in her doctoral thesis.

Franziska Giffey (SPD) said she would continue to campaign for the position atop the Berlin government and denied any wrongdoing in connection with her thesis.

A plagiarism website in 2019 highlighted Giffey's doctoral thesis as problematic and Berlin's Free University then launched an eight-month review of the work. In the end, the university said it identified some problematic passages but only reprimanded the politician and allowed her to retain the title. However, the university in November said it would take a second look at the paper, leading Giffey to at least temporarily stop using the title.

The scandal resurfaced this month when the university's review committee unexpectedly said it had finished its work, which some took as a sign they would strip her of the title. She has until next month to speak with the committee but Wednesday apparently tried to relieve some pressure early. Chancellor Angela Merkel (CDU) appointed Giffey family minister in 2018.

"Should the Free Universiy - in its now third review of my work - come to the conclusion that I should be stripped of my title, I will accept this decision. I am already accepting the consequences from the ongoing and burdensome proceedings," Giffey said in a statement.

Her party in Berlin is now split on how to proceed since the now-former minister is its biggest hope. The SPD trails the environmental Die Grüne party in polls in Berlin after winning the 2016 election with 21.6 per cent of the vote. It then formed a coalition with Die Grüne and the leftwing Die Linke.

In a recent Bild poll, Die Grüne led with 25 per cent of the vote trailed by the SPD with 20 per cent and the conservative CDU with 16 per cent. Die Linke had 13 per cent. If those percentages hold until September, the three-way coalition could remain in power in Berlin but Die Grüne, rather than the SPD, would nominate the mayor as the largest coalition partner, quashing Giffey's hopes. 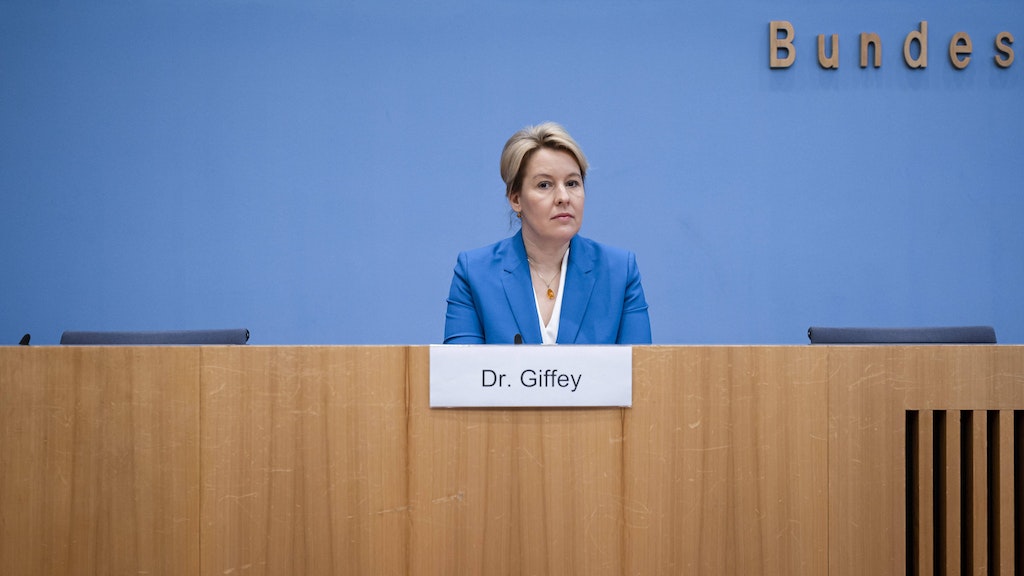 The CDU's reaction was limited, possibly because several of its top politicians have lost not only their doctor titles but even ministerial positions because of plagiarism.

"Her resignation spares the city a tiresome discussion," Steffen Evers, a high-ranking official in the Berlin CDU, said.

Political researcher Gero Neugebauer said the loss of a doctor title is no big deal. For science, "it's a requirement, for politics, not at all."