30 years : Germany's muted approach to its historical milestones is something to celebrate

Germans can feel awkward about celebrating their history. Some are against it altogether. The corona-proofed fest in Potsdam at the weekend reminded us of why sometimes less is more.

Potsdam - There were several things I didn’t expect to see when I took the S-Bahn out to Potsdam on Saturday to visit the penultimate day of the EinheitsEXPO – or Unity Expo – being held there to mark 30 years of German reunification on 3 October. One of them was the troupe of break-dancers sent to represent Berlin alongside all of Germany’s other regions. Another was a sculpture of the iconic East German Trabant car on legs – the sight of which I fear will remain seared on my consciousness until Germany celebrates 31 years of reunification.

The third thing I didn’t expect to encounter was a group of Antifa demonstrators, who were there protesting the whole thing – the open air exhibition charting the story of reunification and Germany today, the official commemoration ceremony held in private, and the currywurst van and bougie coffee and ice cream vendors who also got sent to represent Berlin.

3 October 1990, the day that formalised the Cold War’s death knell following the fall of the Berlin Wall on 9 November 1989, is a day of the kind of importance and magnitude other countries assign to their independence days, which they celebrate (corona permitting) with parades, fireworks and incessant flag-waving. But these days, that’s not very deutsch.

And indeed, there was little of the jingoistic, potentially problematic “celebration” Antifa seemed to take issue with. At the end of the official Unity Day ceremony, streamed from the Metropolishalle in Babelsberg to video towers around the centre of Potsdam, the German national anthem was played. A full orchestra had provided the ceremony’s musical interludes – but the anthem was given a muted rendition performed by string quartet. As far as I could see around me, no-one stood up when the anthem was announced, and no-one sang. 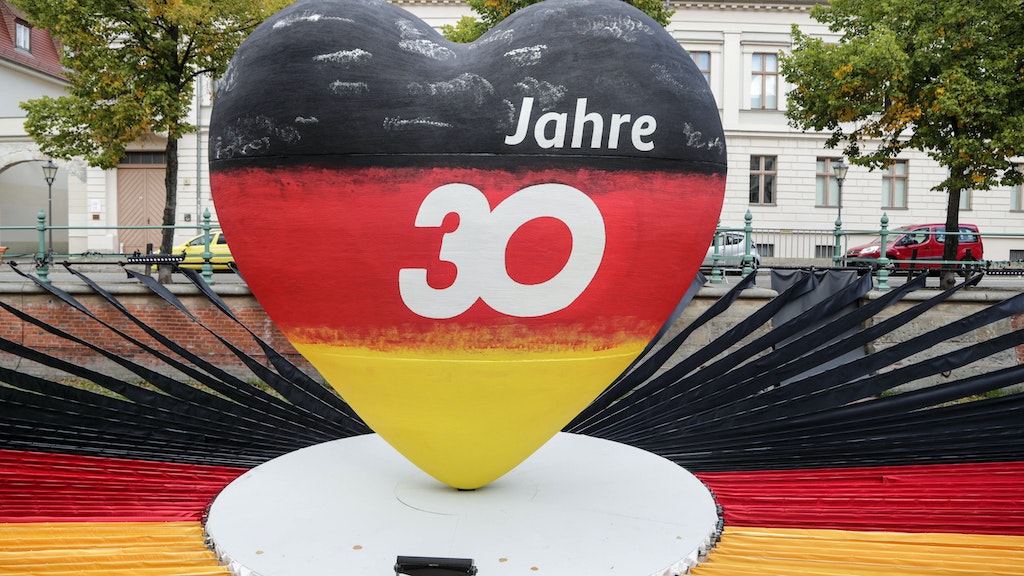 Reunification One in three east Germans "unsatisfied" with politics

Asking what there is to “celebrate” on German Unity Day is a good question. The de-escalation of Cold War tensions, the freedoms former East German citizens gained to vote, travel and express themselves freely, and the reunion of families separated by the inner German border can only be good things. But that’s not to say that the years following reunification were painless – the former eastern “new states” suffered economically, and still do today.

As many as a third of east Germans feel dissatisfied with the current state of politics in Germany, and east Germans are largely absent from Germany’s top jobs, regardless of the sector. And 30 years doesn’t seem long enough to undo the effects of more than 40 years of division – old stereotypes and prejudices still abound. The process of full reunification is an ongoing one.

It was probably wise then that the Potsdam exhibition made no claims to be marking 30 years of a done deal, with self-satisfied patting on the back notable by its absence. People at all levels of German society are still working out what it means to live in a country which within living memory consisted of two separate states with separate ideologies, and what role that divided history plays now and will do in the future.

That was evident in Potsdam’s contribution to the open-air exhibition in which each of Germany's 16 states (as well as the host city) got to present what makes them unique – normally in the form of a glass crate. Shout-out to Hessen, which just set up a row of big letters reading HESSEN. Potsdam contributed a photo exhibition of portraits of 30 east-west couples who got together after the Wende (reunification), accompanied by their reflections on the role east-west differences had played in their relationship. Some were light-hearted – one woman raised in West Germany remarked that she goes grocery shopping in the Supermarkt, while her eastern husband goes to the Kaufhalle.

Others were more serious – one man raised in the west described his rift with his family who, wanting to see him marry for status, refused to attend his wedding to his East German wife. One man walked around the exhibition holding up a hand to cover the accompanying text, trying to guess who was the Ossi and who was the Wessi simply from looking at each picture. He guessed right roughly half the time.

The slogan of this year’s Unity Day celebrations was “Wir miteinander” (us together), but the exhibits didn’t resort to corny clichés to ram the theme home. Cultivating a feeling of “togetherness” was always going to be harder with social distancing, but Bavaria perhaps came the closest to managing it. Their box featured an interactive live stream of a wind band from the town of Fremdingen, with Potsdamers able to listen, clap along, make requests and just chat with the musicians decked out in traditional Bavarian Tracht outfits from almost 500km away.

Perhaps in a muted way, that’s what German unity really looks like in 2020 – people being able to just be together, from opposite ends of the country (which a little over 30 years ago were still separated by the Iron Curtain), bonding over shared culture.

Elsewhere in Potsdam, a characteristically German absence of self-congratulation and jingoistic flag-waving gave way for reflection on what things have changed for the better over these 30 years, and consideration of what still needs to be worked on. As a way of approaching important but complex milestones in national history, I think that’s really something to celebrate.