An opposition politician in the Bavarian state parliament gives her take on the CSU leader and hopeful for the chancellorship.

Berlin - The parliamentary leader of the Greens in the Bavarian state parliament, Katharina Schulze, has known CSU leader Markus Söder for many years. She told Berliner Zeitung why she is not a bit surprised that Söder isn't laying down his sword in the fight to become the CDU/CSU chancellor candidate in the September election.

Berliner Zeitung: As the parliamentary leader of the Greens in the Bavarian state parliament, you've known Markus Söder for a long time. What is the secret to his success?

Katharina Schulze: It's hard to know what Markus Söder stands for politically. Even with [interior minister] Horst Seehofer, you can tell what issues are important to him and why he entered politics. With Markus Söder, I can't tell. No matter what job he's had so far, he's always put his image in the foreground, which could be observed very well in his various ministerial posts, including putting up crucifixes in Bavarian offices to great publicity.

Isn't he just committed to the task at hand?

I ask myself, where is this man's inner moral compass? If the polls go in a different direction, will he change tack again, as he has done so often? Everything is subordinate to his own success. You can see that very well in the current situation. Last Sunday, he said he would present the CDU with an offer, but if they don't want it, that's okay too. Then the executive committee speaks out in favour of Laschet and Söder does not retreat, but fires poison arrows.

Did that come as a surprise?

No! Such behaviour suits him. It runs through his career. You could say: whatever he wants must be done. The endless battle with Seehofer also paralysed Bavarian politics for quite a long time. People are tired of it. They want the government to tackle urgent problems and shape the future and not sink into endless cockfights. 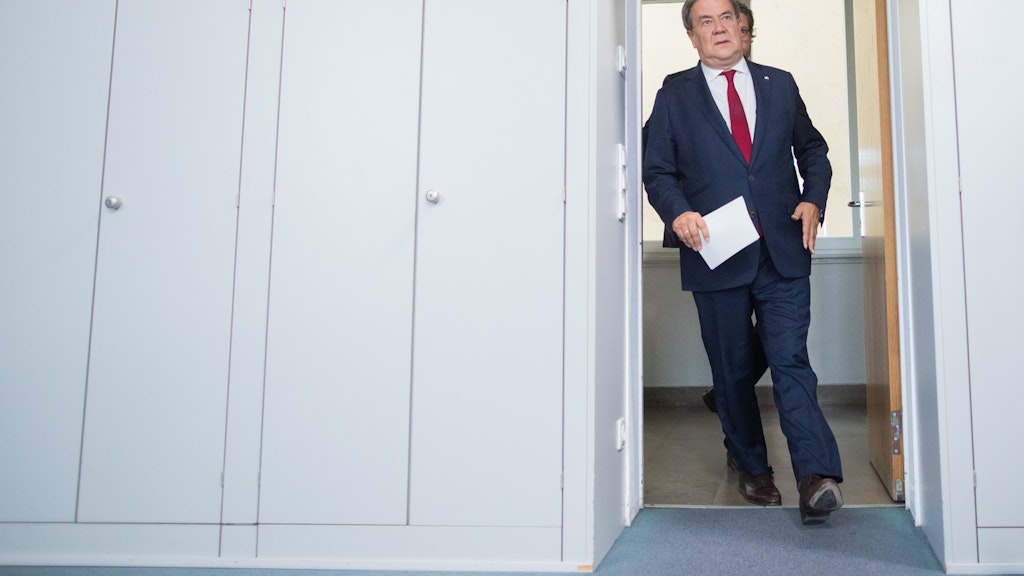 Commentary 2021: It's not looking good for the CDU

As a Bavarian, I'm having a real déjà vu right now. We're living in a global pandemic. The number of infections is rising and instead of bringing the pandemic under control as a grand coalition, the CDU and CSU are busy seeing which of the two will flinch and give in first, Laschet or Söder. I find it hypocritical to talk one way on Sunday and another on Monday. But it suits him.

Is he going to come out ahead?

Who they want to lead the campaign is for the CDU/CSU to decide.

How will Markus Söder react if he has to stay in Bavaria?

Markus Söder will behave as he has in the past: standing gleefully on the sidelines, taunting.

So he doesn't shy from a fight?

At the time, Seehofer was party leader and [Bavarian] premier. And Söder was constantly sawing away at his chair, via the press and the parliamentary group. I think this kind of behaviour repels many people. But we need a lot people who are politically engaged, because it is in politics that the course for the future is set. If it seems as if it's all about elbowing and who's the biggest, then it damages our entire democracy, which also lives from the ability to compromise and that everyone abides by the same rules. It discourages many good people from taking part and excessive personal hunger for power is not good for our country. I would like to see a competition for the best ideas for a positive future: How do we get the climate crisis under control? How do we shape digitalisation so that it benefits everyone? How do we keep our society together?

According to the polls, Söder is very popular with voters nationwide. One could not have imagined that a year ago. How did he pull that off?

He's great at the staging, a man for appearances. He has an eye for staging and also takes the necessary space for it. But when you scrape off the varnish, there's little or nothing left. Where do we stand on energy policy in Bavaria? Where do we stand on nature conservation? Where is social cohesion? Apart from his pretty words, not much has happened. He's then no longer interested in the concrete implementation.

So it's all a performance?

Think of the photo where he is standing next to this tree. He held a cabinet meeting in the Hofgarten [park] under beautiful green trees and emphasised that environmental protection was very important to him. But look at the climate protection law we have here in Bavaria. It is absolutely unspecific. We Greens have criticised this harshly and the environmental associations are also up-in-arms. Markus Söder is good at giving himself a dazzling, golden coat of paint. If you scratch away a bit of the gold, you can see that there is not much behind it in terms of detailed implementation.

How do you explain his success, then?

There is a lot of uncertainty at the moment due to corona. At the same time, Angela Merkel has announced her departure. With his swagger and authoritative manner, he's filling a gap. What I said about environmental policy also applies to corona. Take a look at the figures. Bavaria is unfortunately in the top three states in the numbers of infected and dead. In our state, corona management is going very badly and Green proposals for improvement have all been rejected.