Last Saturday organisers pushed for the removal of a cross atop the rebuilt palace; next week protestors want to see the renaming of Mohrenstraße. 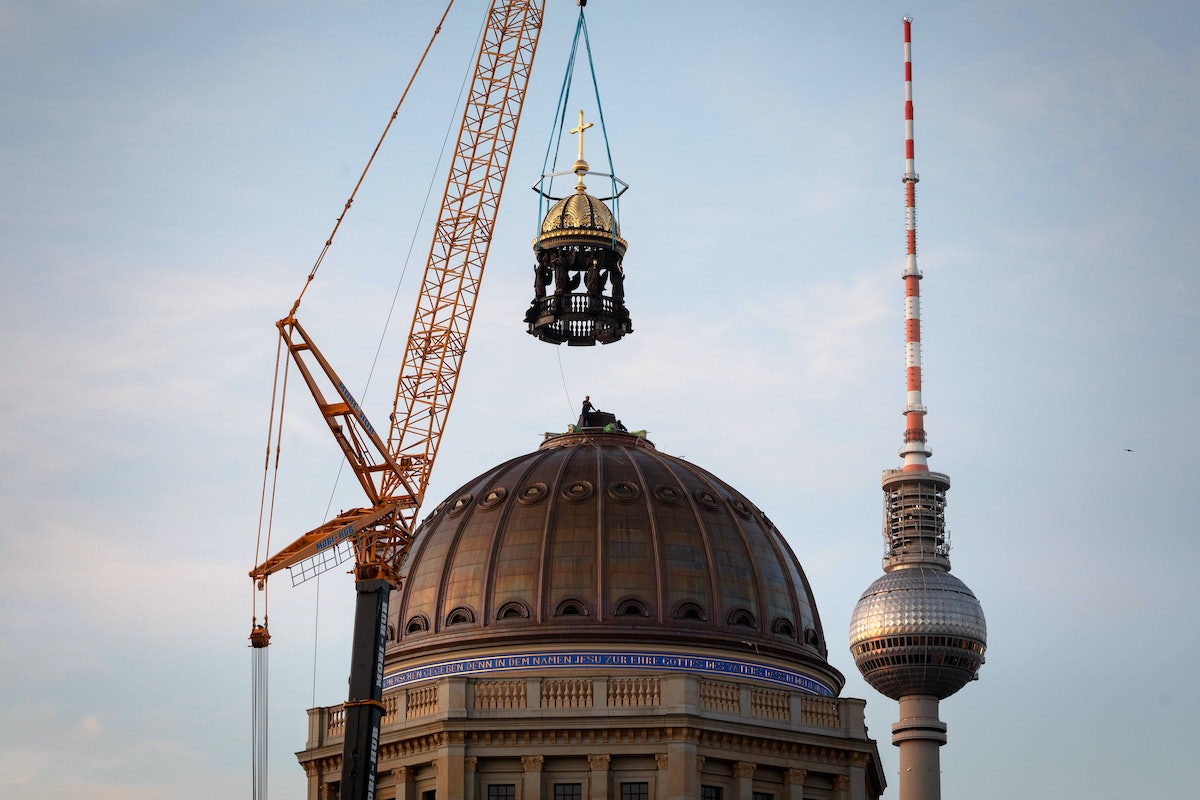 From a Lampenladen to a €600m base for a golden cross. Sad emoji.Imago / Chrisitan Mang

Berlin-A group of protesters on Saturday, 15 August, called for the glittering new cross on top of the dome of the Humboldt Forum – the rebuilt Prussian palace in Mitte – to be torn down. The demonstrators, known as the Coalition of Cultural Workers Against the Humboldt Forum, built a replica of the cross as well as the orb it sits upon and chucked the piece into the Spree River.

“The orb with the cross is a symbol of the imperial power of the Hohenzollern,” said J.P. Raether, one of the demo's organisers.

“In recent weeks, monuments of slave owners and Confederate generals have been coming down in the US and elsewhere. We’re aligning with these movements because we think the Humboldt Forum is a newly erected monument to colonialism, a monument to the ignorance of the German establishment and its idea to place a museum under the sign of the cross.”

An inscription on the original – and included on the model - has, in particular, been the subject of intense debate: "All in heaven and on earth and beneath the earth should kneel in the name of Jesus.”

“Who are the dead who should be kneeling before Jesus? Are these the dead that were killed in the NSU attacks? People who were murdered in Hanau?” asks Raether. “What is this idea that cosmopolitan Germany is putting forward in its centre? We think this is an outrageous revisionist project. And that the cross must come down.”

What’s more, the activist points out that the plan to place a cross on the palace’s dome was never approved in parliament. It was “smuggled in” later.

“This is typical of the lack of transparency of this project. It’s not clear who decides what.”

The group is one of several currently engaged in directing attention to Germany’s colonial past and the country’s lack of willingness to engage with its crimes in colonies such as Südwestafrika, now Namibia. Raether pointed to the vast difference between the cost of the palace and the €10m the government offered Namibia earlier this month in response to the genocide committed against the Herero and Nama people by German troops there in the early 20th century.

Next Sunday, 23 August, International Day for the Remembrance of the Slave Trade and its Abolition, a demonstration will take place in the Lustgarten across the street from the Humboldt Forum, this time demanding the renaming of Mohrenstraße in Mitte.

Many critics and activists consider the street name offensive. The street is thought to have been named after Black people who lived in the neighbourhood in the 18th century. The campaign has gained new traction since the worldwide anti-racism protests that followed the murder of George Floyd in the United States.

The protest is being organised by Decolonize Berlin e.V. The group is calling for Mohrenstraße to be renamed Anton-Wilhelm-Amo-Straße, after Anton Wilhelm Amo, Germany’s first university professor of African origin.

So far, the city has been reluctant to change the name. However, public transport authority BVG announced it would change the name of the Mohrenstraße metro station to that of the nearby Glinkastraße.