Kang Sunkoo: "My work is not a fig leaf – it is a sword of Damocles"

The artist Kang Sunkoo has installed a sculpture in the Humboldt Forum that takes a critical stance on German colonial history. 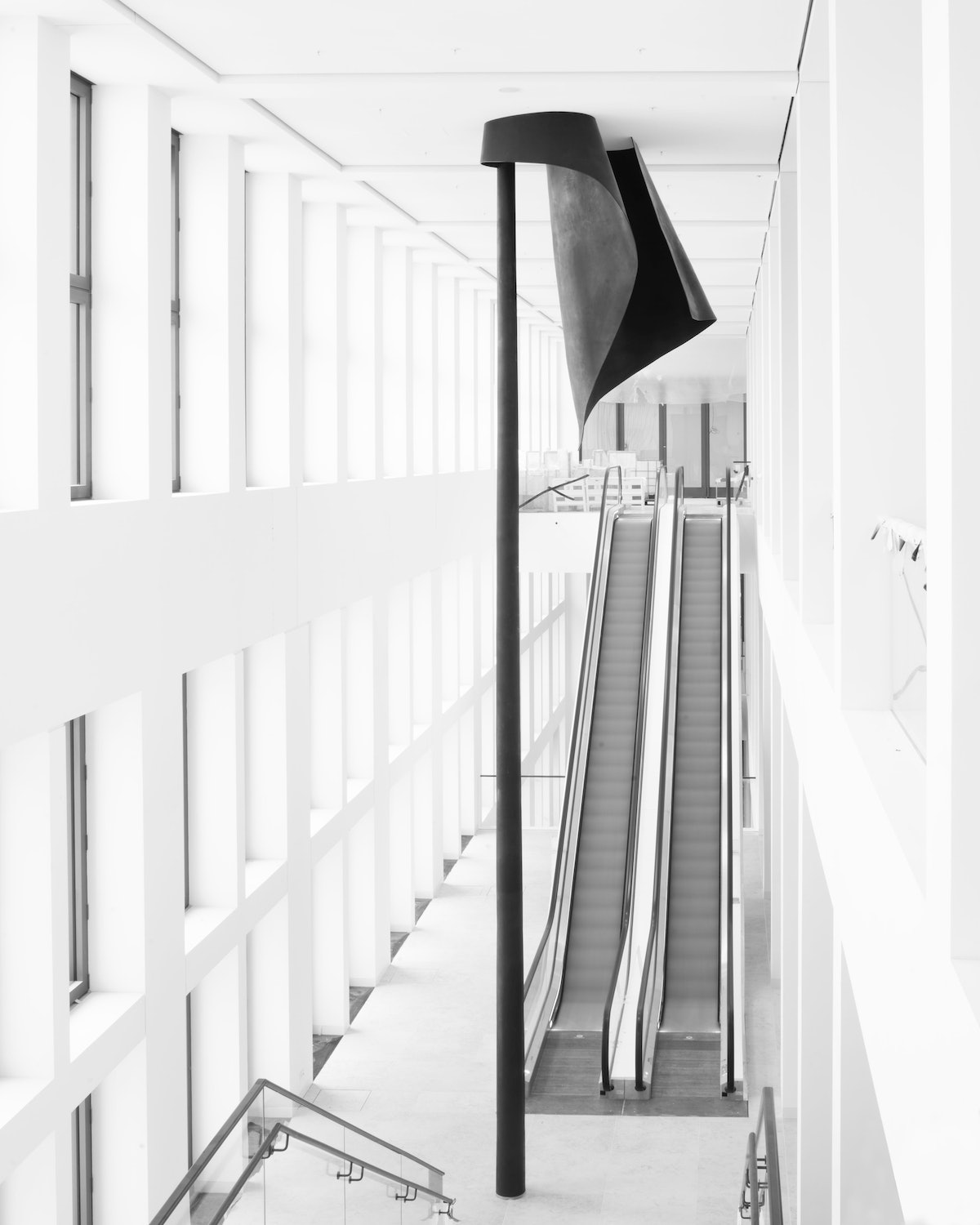 Artist and architect Kang Sunkoo has installed the lower half of a two-part, black, patinated bronze sculpture in the newly opened Humboldt Forum as a reminder of Germany's colonial past. The upper part of the sculpture will be installed in 2021 at Nachtigalplatz in the so-called African Quarter in Berlin-Wedding. In our interview, Kang addressed – among many other things – the question of whether his work was being instrumentalised by the Humboldt Forum to avoid a deeper examination of its own connection to colonialism.

Berliner Zeitung: Mr Kang, your artwork – "Statue of Limitations" – is perhaps the most direct form of engagement in the Humboldt Forum with its colonial legacy. How did the collaboration come about?

Kang Sunkoo: That question is essential to understand my work. There was no curatorial or content-related collaboration with the Humboldt Forum. My work was selected by an independent jury in a public competition organised by the federal government. The Humboldt Forum as well as its architect, who were also both part of the jury, had voiced opposition to my concept. The competition brief did not address the colonial past at any point. Its focus was rather on the veneration of the Humboldt brothers. I was not interested in that. The fact that my work is being realised at all is a testament of the integrity of the public process.

Your installation resembles a flagpole that appears to pierce the ceiling of the Humboldt Forum. In recent years, the architecture of the reconstructed Hohenzollern palace has often been accused of having a revisionist undertone. Can your work also be interpreted as an attempt to counter this?

My work depicts a flagpole with flag flying at half-mast, a transnational symbol of mourning and respect. In the Humboldt Forum, the work begins on the floor and pierces the ceiling to reappear in another location. The mast is placed exactly on the symmetry axis of the building, in the same alignment as the cross on the dome of the reconstructed palace. The Humboldt Forum is a mixture of baroque monumental architecture and modern monumental architecture in the tradition of rationalism. The history of collaboration with fascists by past Italian proponents of rationalism is well-known. The fact that the Humboldt Forum now houses the so-called "non-European" collections makes its contrast to today's Federal Republic of Germany and the international metropolis of Berlin seem all the greater. My work is an attempt to counter this anachronism.

The upper part of the installation was to be located at Nachtigalplatz, in the so-called African Quarter. Why there of all places?

During the time when the Berlin Palace was the seat of German colonial rule, it was planned that “captured” people and animals from the African colonies would be exhibited in Volkspark Rehberge, not far from Nachtigalplatz in the Berlin district of Wedding. With the outbreak of the First World War, the plan was never realised. Even today, the colonialist name of the neighbourhood, as well as the streets and squares, dominate the cityscape despite attempts to rename them. Strikingly, the Nachtigalplatz square shares similar proportions and dimensions with the Humboldt Forum. The upper part of the work will also pierce the ground there exactly on the central mirror axis.

Elevation rendering of the "Statue of Limitations" flag sculpture. Each part is 11m high.Kang Sunkoo,

The proposal was rejected by the district government. With what justification?

Will there ultimately be a permanent exhibition location?

I hope to be able to announce the subsequent station of the upper part while it is temporarily exhibited in Wedding. The realisation of the upper section is an artistically and politically interesting process, even more so than with the lower half in the Humboldt Forum.

In an interview with the Berliner Zeitung, Hartmut Dorgerloh, the general director of the Humboldt Forum, recently said he wanted to involve critics in the museum's work. But is the museum really interested in a sincere debate on colonialism and its own involvement?

I only met Mr Dorgerloh a few months ago, after my work had been completed. At the digital opening event last week, there was no statement about the Humboldt Forum's stance on the return of the Benin Bronzes. I hope the museum's leadership will make sure a reappraisal takes place. I am trying within my means to keep the conversation going and maintain hope, even when the prospects seem bleak. This was also my reason for entering the competition and submitting this entry.

Photo: Kalouna Toulakoun
Kang Sunkoo
was born in 1977 in Seoul. He lives and works as an artist and architect in Basel. He previously worked with architect duo Herzog & de Meuron and artist Ai Weiwei. Kang taught in Ai's class at the UdK Berlin between 2015 and 2018. "Statue of Limitations" won the Art in Architecture competition in 2018. He is currently realising two other art projects in Berlin, one at the Federal Interior Ministry and another at the Federal Office for Radiation Protection.

From the outside, the Humboldt Forum's engagement with art from colonial contexts seems vague and inconsistent. Is your work being instrumentalised as a fig leaf to avoid a deeper engagement with the topic?

The fact that the Humboldt Forum, after its initial rejection, now seems to identify with my work brings me an uncertain joy that is overshadowed when the impression arises that highlighting my work is used as a distraction from the institution's real challenges. I do not want my work to be misused as a decoration of lip service. The "Statue of Limitations" is not a fig leaf. It is a sword of Damocles.

The title - "Statue of Limitations" - points to historical statutes of limitations. Germany has yet to fully legally recognise the genocide of the Nama and Herero in what is now Namibia. Where would a serious reappraisal have to begin in your eyes?

Since the Convention on the Non-Applicability of Statutory Limitations to War Crimes and Crimes Against Humanity of 1968, the prosecution of genocide has been exempt from the statute of limitations. The process of coming to terms with the past must begin with the full political and legal recognition of the genocide by the Federal Republic of Germany.

The Humboldt Forum has employed four provenance researchers to determine the origins of the exhibited objects. Is that enough to address its own involvement in the colonial past?

As a layman, the number seems unspeakably low to me in relation to the number of objects and body parts of deceased people that are presumed to be in the collections.

My position is on the side of the Edo Museum of West African Art in Benin City, designed by David Adjaye, whose dignified architecture is the antithesis of the reconstructed Stadtschloss. I hope that the Humboldt Forum will send a positive signal by advocating unconditional and complete restitution soon.

Should the Humboldt Forum refuse to return the Benin bronzes or initiate the restitution process, what consequences will you draw? Would it be conceivable that you withdraw your "Statue of Limitations"?

No, I see value in the permanent physical connection of my work with the Humboldt Forum building. I would like the work to serve as a permanent reminder of the recognition of a shared history, independent of political, legal and other cultural processes.

Architecturally, the Humboldt Forum seems to say: "Let's undo history". If you follow the debate on looted art, you get the impression that the Humboldt Forum is saying: "History cannot be undone". Where does the truth lie in your eyes?

The Humboldt Forum will sooner or later have to submit to the understanding of justice of today's society.

The French activist Mwazulu Diyabanza had to pay fines in France this year because he repeatedly tried to steal looted art objects from museums in order to return them to their places of origin. How do you assess such actions?

The action is beautiful. It questions the relationship between our notions of entitlement and justice. The work turns this relationship upside down. The fines attribute a monetary value to the action. And the repetition is reminiscent of Sisyphus and gives the work a mythological dimension.

The Senegalese philosopher Souleymane Bachir Diagne called for the debate on art from colonial contexts to emancipate itself from the "capitalist idea of restitution". A "new ethics" towards the object is needed. What should the long-term goal of the restitution debate be in your eyes?

I have confidence in the ability of today's scholars, as opposed to the veneration of historical figures such as the Humboldt brothers. I cannot presume to be able to discuss with scholars on the same level. My ability lies in visual thinking and its expression.

You currently live and work in Basel. Benin bronzes are also exhibited in the Museum der Kulturen there. How do you judge the way the debate on looted art is being conducted in Switzerland?

I moved from Berlin to Basel in August last year. I visited the exhibition "Wissensdrang trifft Sammelwut" ("Thirst for knowledge meets collection madness") at the Museum der Kulturen in Basel, which seemed to be motivated by a desire to take a critical perspective on its colonial past. The exhibition seemed timid and cosmetic to me. Here, as elsewhere, growing beyond the tradition of a Eurocentric and racist gaze does not seem easy.

What are you working on at the moment?

I am working on the second half of "Statue of Limitations" and also two other projects: an installation for the Federal Ministry of the Interior, Building and Community titled "Heimat Heimat", made of approximately 600 square metres of concrete floor tiles and to be laid out in a new extension building. And for the new building of the Federal Office for Radiation Protection in Berlin, I am planning a work entitled "Urhütte", a spatial structure made of bronze. These works also address the social role of institutions and their historical contexts.