Life sentence for rape and murder in Rummelsburger Bucht

The defendant turned himself in after the August crime but claimed mental illness. The judges didn't believe him and looked at his lengthy criminal history.

Berlin - Tuesday was the first time Bekim H. spoke during his trial. The first time he didn't ask his lawyer to speak for him. The defendant had the last word in his trial for murdering 15-year-old Noelle.

The 42-year-old stood up and removed his mask. He looked at the mother and sister of his victim. As joint plaintiffs, they sat across from him on almost every one of the 13 days of the trial.

"I want to apologize to the family. I never wanted the girl to die. I didn't mean to kill her. I'm sorry," he said.

Two and a half hours later, criminal court judge Matthias Schertz sentenced Bekim H: life imprisonment for murder in combination with rape. The court didn't find any aggravating circumstances, despite a request from the prosecutor. The crime would have had to deviate beyond just an attempt to conceal the previous crime, Schertz said. And that didn't apply here.

The crime's only purpose was concealment. Could the defendant be held in protective custody following his sentence? No, the judge says. The law doesn't allow for that either. In Germany, murderers sentenced to life can first apply for parole after 15 years.

Judge Schertz summarised the crime during sentencing. Noelle C. was 15 years old and at a difficult age, he said. On the night of 5 August last year, she left a friend's birthday party, was drunk and wanted to go home. At Ostkreuz, shortly before 2am, she fatefully encountered Bekim H. Noelle initially followed the man voluntarily. Perhaps to consume drugs together.

But things changed at a deserted wasteland at Rummelsburger Bucht where "the sexual assault - and against the will of the girl" occurred, the judge recounted. Bekim H. used force for his sexual desire, as proven by the marks on the high school student's body. Then, to cover up the rape, Bekim killed Noelle by strangling her for several minutes.

"He could do the math of what he would face if Noelle went to the police," Schertz said. 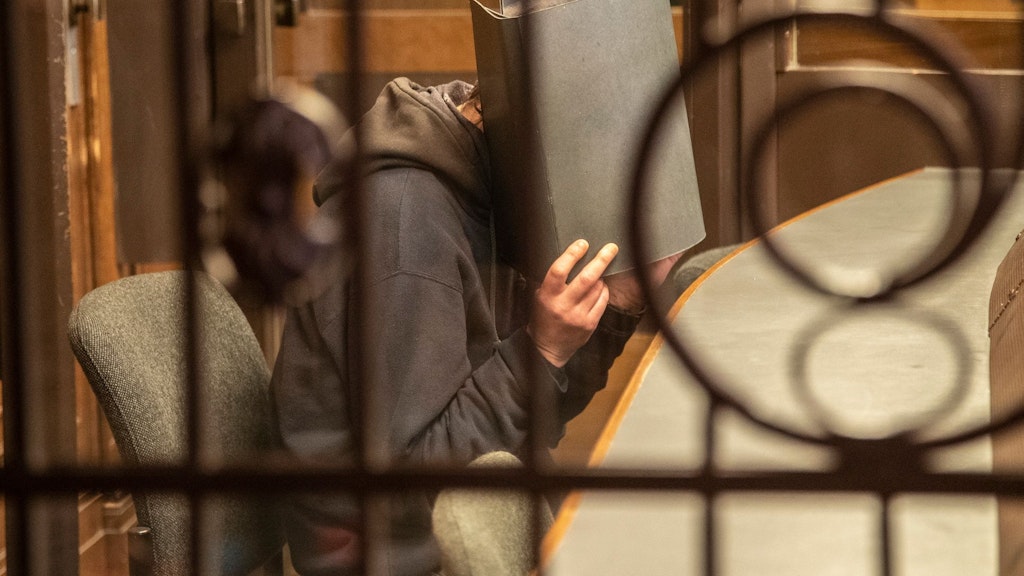 Crime42-year-old on trial in murder of 15-year-old

Bekim H. is no stranger to crime. He brutally raped a 68-year-old woman in 2001. A district court acquitted him based on an insanity defence. The judges ordered him confined to a mental hospital instead. In 2014, the convict was released on parole despite warnings from the clinic.

"Which, from today's perspective, turns out to be a gross mistake," said Schertz.

Rehabilitation was a failure when it comes to Bekim H., the judge said. On the contrary, the convicted managed to sharpen his ability to manipulate people. After his release, the defendant continued to drink and use drugs, although he shouldn't have. And he deceived authorities who were supposed to monitor his condition.

A drunkard doesn't have the guts to do that

The defendant exhibited pronounced disassociation, which translated into serious crimes, Schertz, one of several judges presiding over the case, said.

That night in the Rummelsburger Bucht, the defendant's culpability was not significantly impaired, and a mental disorder didn't play a role in his actions, according to the judges' assessment. Their findings tracked the opinion of a psychiatric expert, who changed her preliminary assessment during the trial. She had previously claimed the defendant was incapable of guilt. Her mind was changed by the testimony of Bekim's fiancee of three years. Bekim had never lost control with her, Schertz said.

The chamber also ruled out a drunken stupor, as described by the defendant. His demeanor "was not that of a drunk," Schertz said, referring to the defendant's clear gait on a video from Ostkreuz station. Bekim H. was also able to climb over a two-metre fence at Rummelsburger Bucht without problems. He even helped Noelle over. After the crime, he covered the body with branches and took Noelle's things.

"A drunkard doesn't have the guts to do that," the judge ruled. In the early morning of the day of the crime, Bekim H. called his lawyer and, around 1.30pm, turned himself in to the police.

Senior public prosecutor Ralph Knispel is satisfied with the verdict. There will be no appeal. Bekim's two defense attorneys said they'll wait until the written decision before deciding whether to appeal.

"Our client expected the verdict," defense attorney Jan Zielke said. In their pleas, the attorneys were unsuccessful in demands for a new psychiatric evaluation.

"The verdict is not completely unexpected," attorney Sven Peitzner, who represents Noelle's mother, said. "But it doesn't change the fact that my client lost her daughter."


Once the sentencing is final, Bekim could eventually apply for parole.

"I think it will be difficult to find anyone who will claim that he's no longer dangerous," attorney Christina Clemm, who represents Noelle's sister, said. She hopes the officials will pay better attention then.

Adapted from the original German by Andrew Bulkeley.