Musa Okwonga: "You’re not considered as a romantic option"

In his latest book, Berlin-based British-Ugandan writer Musa Okwonga writes about his life as a POC, the death of his father, football and, of course, love. 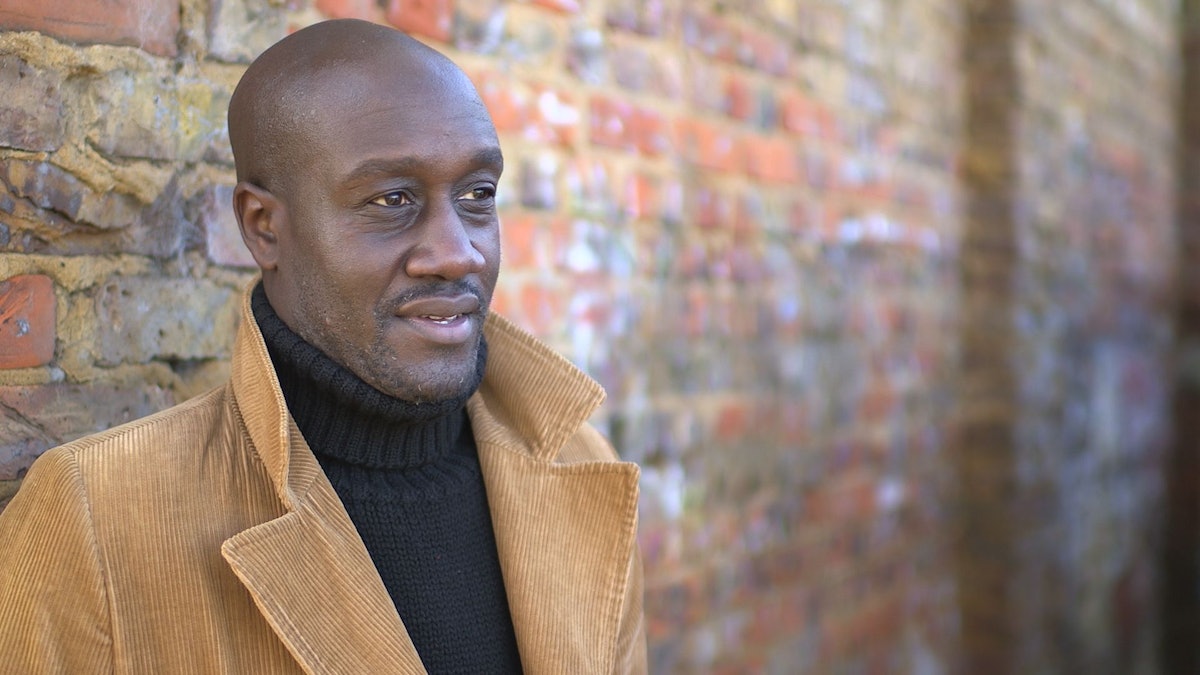 Berlin-Musa Okwonga's new book begins with a blow to the gut: “Sooner or later, Berlin will punch you in the stomach.” It shouldn't be taken personally, Okwonga explains. Rather, “try to treat it as a passport stamp, as a sign of your arrival”.

Okwonga, a British-Ugandan writer and musician, has lived in the German capital for more than six years. He has many such blows behind him and many of them he wrote about in his latest book, In The End, It Was All About Love,  a kind of how-to manual for living - and dating and maturing - in Berlin. It's about racism, coming to terms with the past and trauma. After the 2014 World Cup - Okwonga often writes and talks about football - he felt he needed a total reboot. He wanted to get out of England and a good friend told him about a “magical village” in Germany. Okwonga was sold and moved straight to Berlin, where he has lived to this day.

On a Thursday afternoon, Okwonga talks to us over Zoom from the Friedrichshain flat where he's lived since 2015. He's wearing a red Adidas tracksuit and is in the best of moods. Why shouldn't he be? It's a promising year for him, or at least for his literay career. After In The End, It Was All About Love, One Of Them, a non-fiction book about his time as a pupil at Eton will follow in April. Later in the year, Striking Out will be published, a children's book he wrote together with former England football star Ian Wright. Okwonga's football podcasts Stadio and Wrighty's House have hundreds of listeners worldwide.

But for now, it's all about In The End, It Was All About Love. In three sections - “Righteous Migrants”, “Black Gravity” and “Your Passport” - the reader dives head first into Okwonga's everyday life in Berlin.

It's quite a short book. “We're the Instagram generation, the WhatsApp generation. We have so many other things to look at. So I wanted to write a book that was short and easy to read,” says Okwonga.

“The book only has 30,000 words and each segment on average is about 400 words. I wanted it to be a book you could read on the S-Bahn on your way to work. That you could screenshot and post to social media. Whatever you fancy. My whole life philosophy is based on simplicity.”

The fact that he writes in the present tense and that you step into the protagonist's shoes through direct address in the second person (“You want to...”, “You have...”) means that you see everything through the eyes of the Ugandan narrator, an alter-ego of the author. You allow yourself to be taken on the journey.

Formally, the different sections of the book are a mixture of anecdotes and tips. In “How to Handle Impostor Syndrome” Okwonga recommends that you value yourself more; in “How to Eat Cake in Berlin” that you should treat yourself once in a while. In “Treat Your Loneliness as a Guest”, Okwonga addresses loneliness.

Again and again he reminds himself that he isn't ugly. But why is this an issue for him? “There are so many structures set up that make you feel ugly. Especially if you’re a Black man, society teaches you to despise yourself. Your skin colour isn’t right. Your food, your language, your accent, all these things are looked down upon. You’re not considered as a romantic option. And even if we want to or not, we internalize these things. So it’s important for me to keep telling myself: You’re not ugly. You’re worth something.”

And what does that have to do with coloured clothing? “As a Black guy, I constantly experience racism everywhere. Who are we kidding? In Bratislava, I was attacked by skinheads on the street. In England, I was racially profiled by cops when I was standing at an ATM – and I was only a student withdrawing money!” He has also gone through such experiences again and again in Berlin. “The first time I was attacked in Berlin, I was wearing black. And I thought to myself, if that ever happens again, I want to make them work for it. I won’t make it easy for them. I made it a point to wear brighter colours. I won’t hide in grey or black anymore. People want us to feel ashamed about ourselves, so I’m going to celebrate my skin colour even more.”

Here Okwonga briefly clarifies that he does not want to be considered an expert on racism just because he has a certain skin colour. “That’s why I escaped the UK. I blew that perception. I wanted to be called the football guy, not the race guy. In the middle of the BLM protests last summer, I was asked by journalists how I feel. And I asked back, why aren’t random white people stopped on the street and asked this question?” He finds it all the more gratifying when influential white celebrities take a stand: “Germany is also the Germany of Leon Goretzka from Bayern Munich and Marco Rose from Mönchengladbach, who speak out against hate speech, against racism. When there was a panel recently on the WDR with five white people discussing racism, there was a swift backlash. That’s Germany too. And I hope this Germany will prevail against hate speech, racism and rightwing extremism.”

In The End, It Was All About Love is a very personal book. Okwonga's own family history forms the core of the narrative. All the incidents and experiences he writes about - whether his money worries, his difficulty finding true love or his low self-esteem - always lead back to his childhood trauma: Okwonga's parents, both doctors, fled to England from Idi Amin's regime.

But in the early 1980s, his father returned to Uganda to offer his medical services. “He was the chief military surgeon for an armed group of the resistance and he was killed in a very high-profile helicopter crash when I was four years old. We went to Uganda to bury him and that is actually the first memory I have of my father: how we buried him next to a tree.” His father was 40 years old when he died. And Okwonga was approaching 40 himself when he wrote In The End, It Was All About Love. He describes it as a blockage in his mind: the question of whether he would survive this year or suddenly drop dead at 40?

Okwonga did two things about it: First, he sought out a therapist. “I wanted to show that processing your feelings can be healthy,” he says. He is not ashamed of his vulnerability, of his tears. “Showing no emotions or empathy can be harmful. We men need to start admitting that we’re also scared. When we open up, we show true strength.”

Second, he went to Uganda to confront his long-suppressed feelings. He sought out the tree he stood by when he was four years old - it had grown big by then. And suddenly something deep inside him freed itself, as Okwonga describes it: “It felt like a chapter closing. I worked through so much. It was an indescribable feeling. I was free. I’m free today.”

And he is free in Berlin, for him a place where one “expects to hear the bass drum and end up entranced by birdsong.” What exactly does the city mean to him at the moment? “Berlin has given me so much: I have written five or six books. And 24 songs,” he says. “Each time I come back from a trip abroad, my heart lifts a bit. That moment, when the TXL bus comes down the hill torwards Beusselstraße, that feeling is so magical. I always feel like I’m back home. When I stop feeling that, it's time time to go.” Is he actually worried about that happening yet?

“My relationship to Berlin is like dating someone. I suppose you always fear the end, but until then I’m going to enjoy every moment.” At the end of the day, everything is about love.