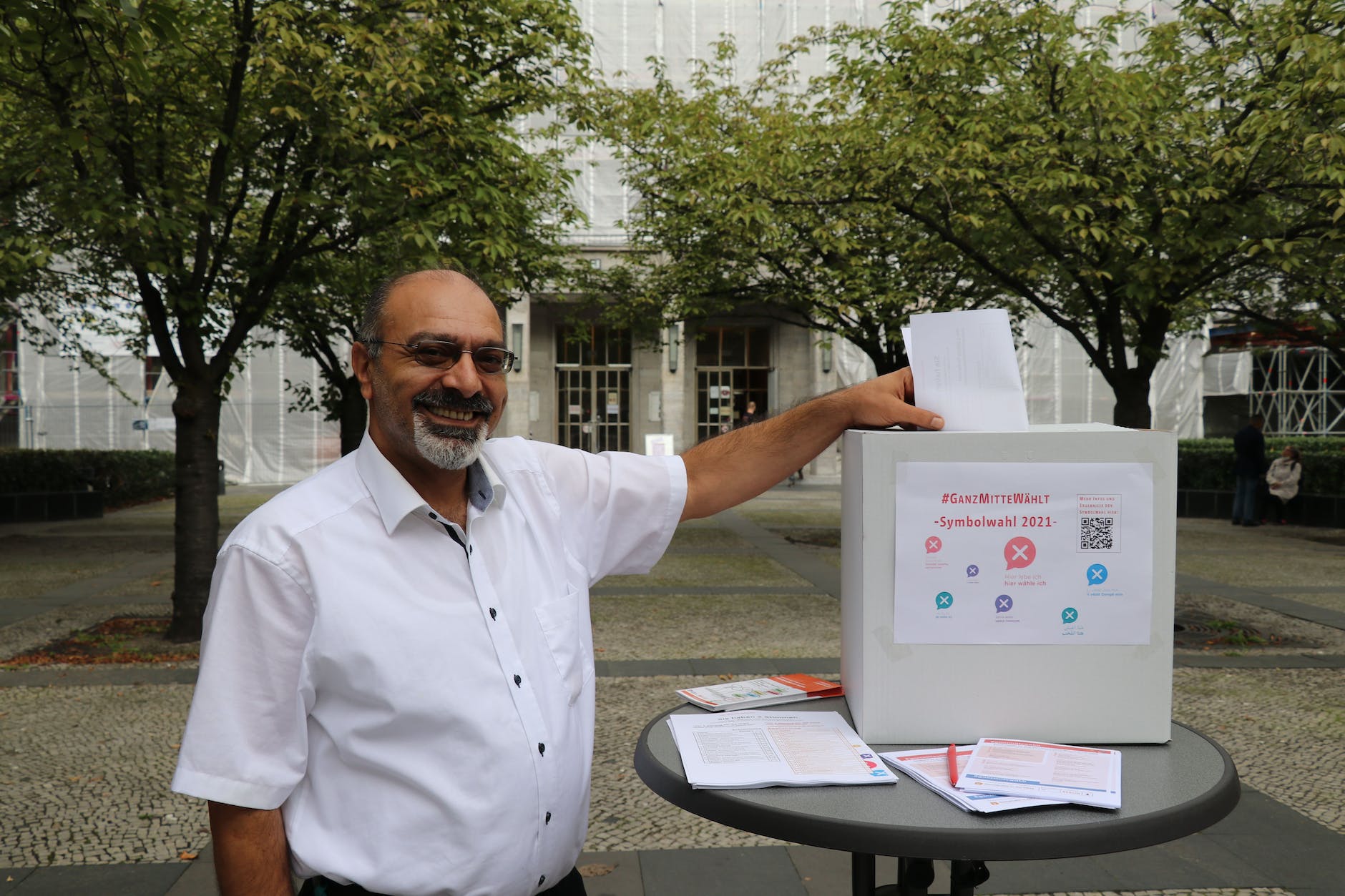 Herr Cayir, doorman at Rathaus Tiergarten, casts his vote in Mitte's "symbolic election". He has lived in Berlin since 1986, but still has no German passport.Bezirksamt Mitte

Berlin-This Sunday, three elections are taking place that could spell big changes for Germany’s national government and Berlin’s state and local representatives, as well as a major referendum on housing policy. But a third of Berliners of voting age will have no say – because they don’t have German citizenship.

Across Germany, 9.7 million residents – 14% of the population – will not be able to vote in the national Bundestagswahl for the same reason. The only non-Germans with active election rights are EU citizens, who are allowed to vote in local elections like Berlin’s Bezirksverordnetenversammlung (BVV). Germany is far from the only country which largely limits voting rights to its own citizens, but campaigners argue that this stance is out of place in a country which has been a destination for migrants for decades – and especially in a city like Berlin, which prides itself on its international makeup.

The problem is particularly stark in Mitte, where 36% of residents have no national or state voting rights and 24% can’t even vote locally. Last week, the district held a “symbolic election’ to give non-German Berliners the chance to make their voice heard. 971 voters representing 60 nationalities took part in the project, which replicated the Bundestag elections this Sunday: every ballot paper contained two votes, with the same parties and candidates to represent Mitte included in the first vote. Several local migrant outreach and consultation projects served as polling stations, and were active in spreading word about the election among migrant communities.

“The decisions that will be made at this election will affect all people in Germany, but not everyone gets to play a part in making them,” Ramona Reiser, Mitte councillor for Youth, said at the announcement of the results. “This isn’t worthy of a democracy in my view, and we can’t continue to shut out such a large group from our most important decisions.”

In both the first and second votes, the SPD emerged victorious with 29% and 31% respectively. The CDU followed closely with 26% in both votes. At many polling stations, discussions began about how the situation ought to be changed going forward.

A voter casts her ballot at Lotsenprojekt "Die Brücke", a consultation service for foreigners in Mitte which served as a polling station.Bezirksamt Mitte

“EU law means that EU citizens have the opportunity to vote locally – so why can’t all non-EU citizens do that too?” said Bettina Pinzl of Demokratie in der Mitte, one of the participating organisations. “I think it would be a fair change, and also one that would be easier politically, to link voting rights to residency.”

This is already the case in 14 EU countries, such as Denmark, where all foreign citizens can vote in local elections after living in the country for four years, and Sweden, where the minimum requirement is three years. However, in Germany, legal or constitutional changes would be needed to allow those without citizenship to participate. In 1989, the constitutional court ruled that the articles of the Grundgesetz certifying the rights of “the people” (das Volk) to elect democratic representatives only refer to those with German nationality. One of these, Article 28, was amended following the formation of the EU in 1992 to confirm the rights of EU citizens to participate in local elections.

German restrictions on dual citizenship present another barrier to foreign citizens wanting to vote. Foreigners who gain German citizenship often have to give up their original nationality, although there are exceptions, including for EU citizens and refugees. Speaking at the announcement of the results of Mitte’s Symbolwahl, district mayor Stephan von Dassel (Grüne) spoke of a Russian woman who had voted in the poll because despite living in Germany for 20 years, she was not prepared to lose her Russian citizenship. “Many people like her feel a great frustration but also hope that one day they will be able to take part in these elections in real life, or just be counted politically,” he continued.

Further research by the Türkische Gemeinde in Deutschland (TGD) assessed how candidates at this year’s Bundestag election viewed some of the key questions related to voting rights. Of the 713 direct candidates from across Germany who responded to a questionnaire from the organisation, candidates from the Greens, Die Linke and the SPD largely backed allowing citizens of “third countries” to vote in local elections, with 96%, 95% and 85% respectively saying yes to the idea. CDU/CSU and AfD candidates opposed the proposal by 82% and 83% respectively. The FDP was more divided, with 27% for and 66% against. The Greens, Linke, SPD and FDP also showed support for easing the process of naturalisation, while the AfD strongly opposed. The CDU was divided, with both 43% for and against.

“These are changes we have been campaigning for for more than 25 years,” said TGD chairman Gökay Sofuoglu. “A Croatian colleague of mine couldn’t participate in elections here for many years, but since Croatia joined the EU, she can and does at every opportunity. That demonstrates that it simply doesn’t make sense to link voting rights to citizenship – things cannot continue this way.”