Pivoting to green: Silicon Allee's Travis Todd on the state of tech in Berlin

The news site, meetup and campus has played a big role in creating the Berlin start-up scene of today. We asked its founder what's next. 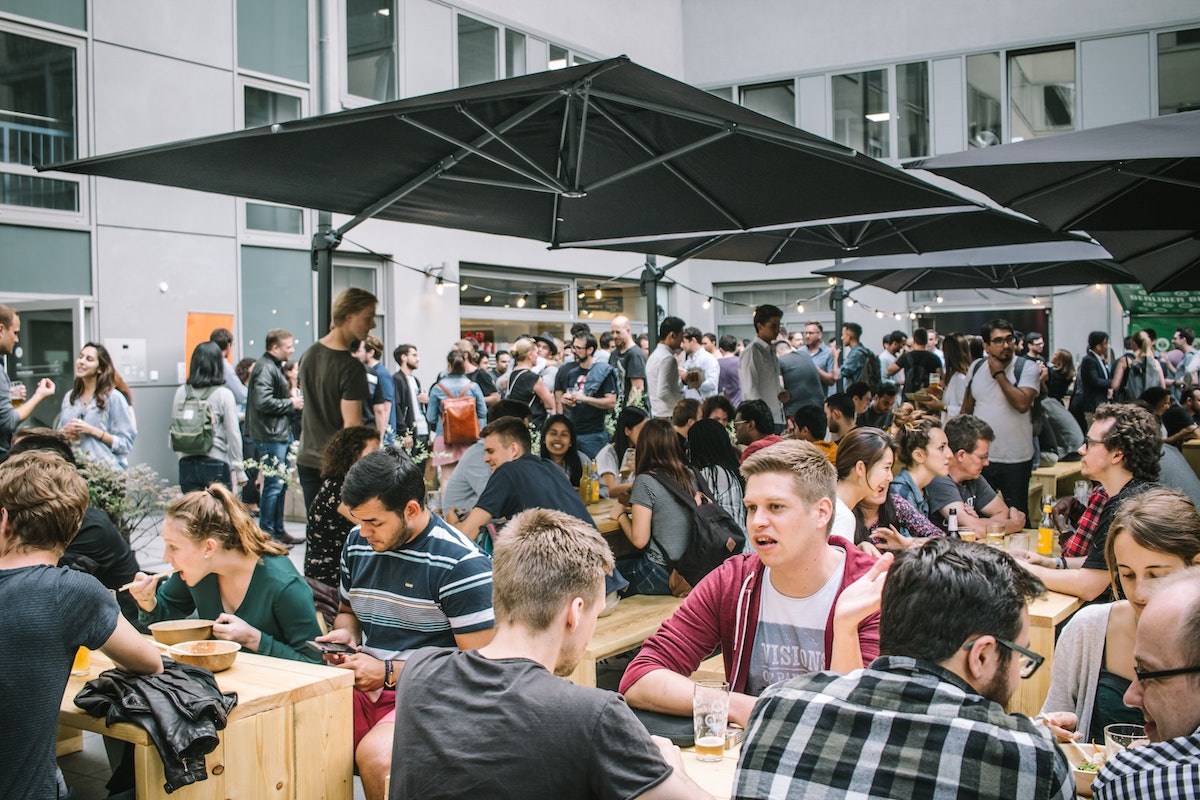 The old days. Networking in the Silicon Allee courtyard.

Berlin-The pandemic has radically shifted the idea of where and how we work - for millions of people around the world. Our city's start-up scene has been equally affected by the upheaval. We checked in with Travis Todd, founder and managing director of start-up support network and campus Silicon Allee - to ask what he makes of this moment.

How has Silicon Allee been affected by the pandemic? It seems like a place that's very much about physically meeting people, networking, being in an office together.

Like everyone, we’ve moved online. Our meetup is one of the longest running tech meetup events in Berlin - every month - since 2011. As soon as it was clear that physical events were going be cancelled, we just jumped straight into doing it online. It was fun because it was a new format, because there were a lot of new faces. We could actually expand our audience. It gave people who weren't physically in Berlin the opportunity to drop by. We had people calling in from Argentina, people from Pakistan. So it was a blessing in disguise.

Will there still be a need for office space once this is finished? Is there going be a mass shift to remote work?

We've seen an acceleration of acceptance of home office work. It was a topic that was almost taboo in German culture, pre-corona. But now there's a huge acceptance of the ability of people to work from home. I think office space is not going away. Especially for creative industries and teamwork, being together in the same physical space is super important, but the head-down, focused work or the more mundane stuff can easily be done from home. All the start-ups I know have pretty robust work-from-home policies, strategies on how to keep employees engaged and active as parts of the team. They have processes for bringing them in for weekly team meetings and things like that. I think German corporations, especially, are going to struggle in trying to adapt to that. Because now I think the expectations of employees is to have a hybrid work culture.

So once the pandemic is over you predict a hybrid between the physical office and remote work?

Yes, but what I'm interested in is seeing how that changes roles in companies. I think there are going to be new roles that manage that interaction, some sort of hybrid of community management plus HR. You'll have team members who will be strategically aware of when things need to be in person and what things can be remote. I'm curious to see how that affects the soft skills, HR side of things.

Photo: Silicon Allee
Travis Todd
is the founder and managing director of Silicon Allee. The firm began in 2011 as a meetup and an English-language news blog covering the Berlin start-up scene. Since then, it's expanded into consultancy, event production and providing office space and apartments for entrepreneurs at its campus in Mitte. Silicon Allee also runs the Berlin Founders Fund, which fosters early stage projects with a monthly stipend.

Isn’t it a strain to never see your colleagues in real life, to lack the analogue aspects of interacting with a human being?

We're social creatures, we're pack animals. You can't get away from that. If you're a software developer, it's probably not as frequent that you need to physically interact with somebody, but for the other soft skills and the creative aspects of everyone's job, it’s super important to be around other people.

Do you even need places like Berlin or Silicon Valley as tech hubs if everyone's online anyway?

You have hubs because of network effects. You have all the right people in the right place to make things happen. I don't think you can distribute that. Even if it's about raising funds. It's kind of a mundane thing but it requires a lot of human interaction. Meeting the right people, human activities that only happen in bigger groups. I don't think that the importance of major tech hubs is going to dwindle. But I don’t think you're going to have as big a need to bring employees into the city. You're seeing this already in San Francisco where everyone's finally able to move outside the city and rent prices are dropping like crazy.

Which is a good thing for people who can't move away, right?

Absolutely. I think it's a bit of redistribution of people and jobs and wealth and opportunity. At the end of the day, that’s a good thing. It's going to let people live the lives they want to live but have access to the jobs that they want. But there will be an expectation to travel more for these in-person interactions. But it’s way too early to tell.

Has there been a decline in the number of people setting up companies in the pandemic?

You know, entrepreneurs are weird people. We see moments like this as a moment of opportunity. The entire service industry has been flipped on its head and is looking for new opportunities. I would say there's been an acceleration of people trying new things. All the resources that you normally would have had to be physically present for, like accelerators such as our Berlin Founders Fund, that's all online now.

Tech dudes and craft beer at the Silicon Allee cafe.

We haven't seen a slowdown in venture capital investment. There was a little bit towards the beginning of the pandemic, but VCs are still actively investing. We've obviously seen a sector shift in what is getting invested in.

I was going to ask…

Travel and hospitality has shut down. But it's not across the board. People will travel again. Look at Airbnb. They almost died but then they completely changed their focus from big destination trips to local getaways and innovated around the crisis. I think investors are more wary of companies that don't have a clear market that's stable. Instead of unicorns they’re looking for zebras, animals that are unique and follow a sustainable, clear business model as a long-term goal.

So, specifically what sorts of companies?

There's been an influx of investment into online collaboration tools. This company Wonder applied for our Berlin founders fund programme but they're a little bit too far along. And they've now raised around €12 million in the course of the last six months. It's a virtual networking room, a kind of a competitor to Zoom that has a bit more natural interactions than you would in like a Zoom call. Things like telehealth, telemedicine and online education are seeing a lot more investment.

I've always been passionate about climate change. It's always been kind of a hobby or an activist thing on the side. Look at the political landscape: There was a Green wave in the European parliamentary election [in 2019]. The European Union has the Green Deal framework. In the US you have a progressive – or at least not a conservative – government, that's going to be looking for climate change policies. That's going to reinitiate transatlantic interactions. And then you have the German election coming up next year where I think you're going to have a pretty big Green influence in the next government. The technology sector is taking notice of this because they know that there's regulation coming down the line and regulation creates opportunities for innovation. With the EIB (European Investment Bank) divesting from fossil fuels, there's money that's going to be thrown towards innovative climate solutions. Germany, being the major powerhouse economy of Europe, has the thought leadership there, and is going to be at the forefront of the next wave of sustainable companies. It’s like this beautiful convergence of activism, policy technology and the pressure of the climate deadline coming up that's creating this opportunity here in Germany. I think Berlin, with its history of activism and now being a tech startup hub, will really be leading the charge in a lot of that.

Are there any particular technologies you see emerging in Berlin or in Germany?

Germany's putting a big bet on the energy sector, a big bet on hydrogen. That then goes over into the automotive industry. Mobility is obviously a huge part of it. I think Germany can do a lot in agritech. And then there are all sorts of interesting software solutions, like carbon calculation and carbon offsetting, the sort of things that need to be the first step in any of these processes.

Are there any Berlin companies you'd like to give a shout out to?

Some are doing early, interesting stuff around carbon calculation, like plan A. Or check out Kleiderly (that makes a material out of recycled textiles) and betterfish (that makes a plant-based tuna alternative).

Is Silicon Allee doing anything to foster green business?

We're evaluating that right now. I'd love to do the next iteration of our Berlin Founders Fund solely on that topic.

In an interview last year, you said you wanted to bring some of the Silicon Valley mentality to Berlin. What did you mean?

I've realised, having done this for so long, it's actually kind of endemic of most early start-up scenes, in cities with nascent, smaller tech communities, that there is this fear of sharing your idea and getting out there and telling people what you want to do. It comes from a socially unacceptable view of failure. We tried to push this early on: we wanted people to get out, share their ideas and what they're doing with other people, get feedback - build this community of people who are willing to be open and supportive. That’s something that then grows and becomes much more valuable in bigger scenes where you realise that you should never be scared to share your idea because the worst thing that's going to happen is somebody recommends somebody who can help you. Whoever you share your idea with is likely way too busy to worry about stealing. They're probably going to end up helping you if they're excited about it. They're probably going to want to join your team. So, there's a lot of that kind of attitude that we wanted to bring to the early scene here. But now it's completely proliferated. Berlin is this icon in not being so risk adverse, accepting failure as part of a journey, sharing ideas. Now you have people pitching for money with pitch decks and notes and no product. So, I think we helped that transition happen. The companies that built big successes here probably played more of a role that we did. But I think we were part of that.