The controversial figurehead of the corona conspiracy movement faces a range of charges, including online hate speech. 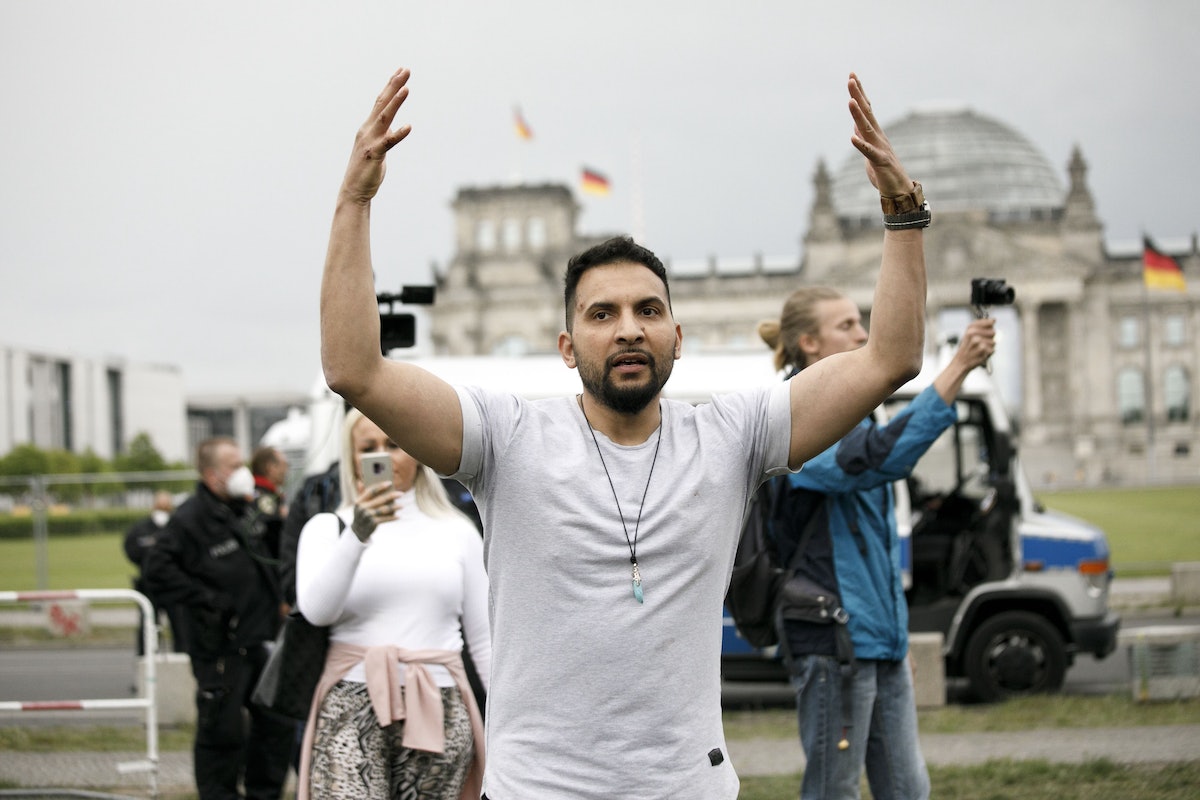 Attila Hildmann at a corona demonstration in front of the Reichstag in May.dpa

Cottbus-Attila Hildmann, Germany's best known ultra-right vegan chef, received a visit yesterday from police officers with a warrant to search his flat in Cottbus, Brandenburg. The self-proclaimed "conspiracy preacher" and leading figure at corona-sceptic demos in Berlin (where he has been arrested several times) is under investigation for offences including hate speech for his online tirades.

The search was ordered by the district court of Bernau at the request of the Cottbus public prosecutor's office "for the purpose of averting danger", police spokesperson Torsten Herbst told dpa. Hildmann confirmed the search via his channel on alternative messaging platform Telegram, where he has more than 117,000 followers.

Spokesperson Herbst said several preliminary proceedings against Hildmann are underway at the Cottbus prosecutor's office. He also confirmed eight officers from the Brandenburg State Office of Criminal Investigation and the Eastern Police Directorate had seized items including several laptops, mobile phones and other storage devices. "The aim was to make it more difficult to commit further crimes on the internet," Herbst added.

Cries of "political persecution" ahead of new corona demos

Hildmann wrote on his Telegram channel that officers had "stormed" his home in an attempt to "shut down [his] reconnaissance work" on the platform. He claimed the search demonstrated he had now become a "politically persecuted person" the day before corona sceptics planned to demonstrate today against the adoption of changes to Germany's Infektionsschutzgesetz (Infection Protection Act).

The Infection Protection Act has been part of German law since 2001, enlisting the cooperation of state institutions and key parties including local authorities, doctors and hospitals in helping contain the spread of infectious diseases in Germany. The Bundesrat, Germany's upper house of parliament, is expected to give its approval to amendments to the act in a special meeting today amid the ongoing pandemic. After that they will need a presidential signature before they enter into law.

These latest amendments are to give legal basis to the most recent corona restrictions. They do not, as Hildmann claimed on Telegram, give health minister Jens Spahn the authority "to vaccinate all Germans with a gene vaccine or worse, and quarantine you and your children at any time".

At the time of writing, Berlin police are tackling a demonstration of around 10,000 protesters near the Reichstag, which is under heavy guard. Water cannon have been deployed after demonstrators repeatedly attacked officers.

Who is Attila Hildmann?

Hildmann, 39, first made his name as a vegan food blogger, going on to become a media personality with a range of cookbooks, vegan snack bars (one remains in Charlottenburg) and appearances on some of Germany's biggest entertainment shows. However, his image has been tainted by his increasingly vocal far-right views. During the corona pandemic, he has used his Telegram channel to propogate a range of wild conspiracy theories, including collaboration between the German government and Bill Gates to enforce a surveillance state in Germany.

He has also pushed anti-semitic conspiracy theories, claiming there is a Jewish plot to destroy the German people through the pandemic, and has attended corona demonstrations carrying flags from the German imperial Reich and spouting Nazi SS slogans. At the same time, he claims to be simply "fighting for freedom", and complained on Telegram that thousands of shops had stopped carrying his vegan food products because of his "defamation" in the press.

Today, Hildmann's Telegram channel has published a consistent stream of footage from the Berlin demo, calling police "the Stasi" and labelling Merkel's government as "aggressors and fascists". The official police warning he received after the search of his flat yesterday seems to be going unnoticed.