Post-war sexual violence against German women: "The elephant still in the room"

Why are victims of rape by Allied soldiers in Germany after the Second World War not commemorated? A conversation with historian Miriam Gebhardt. 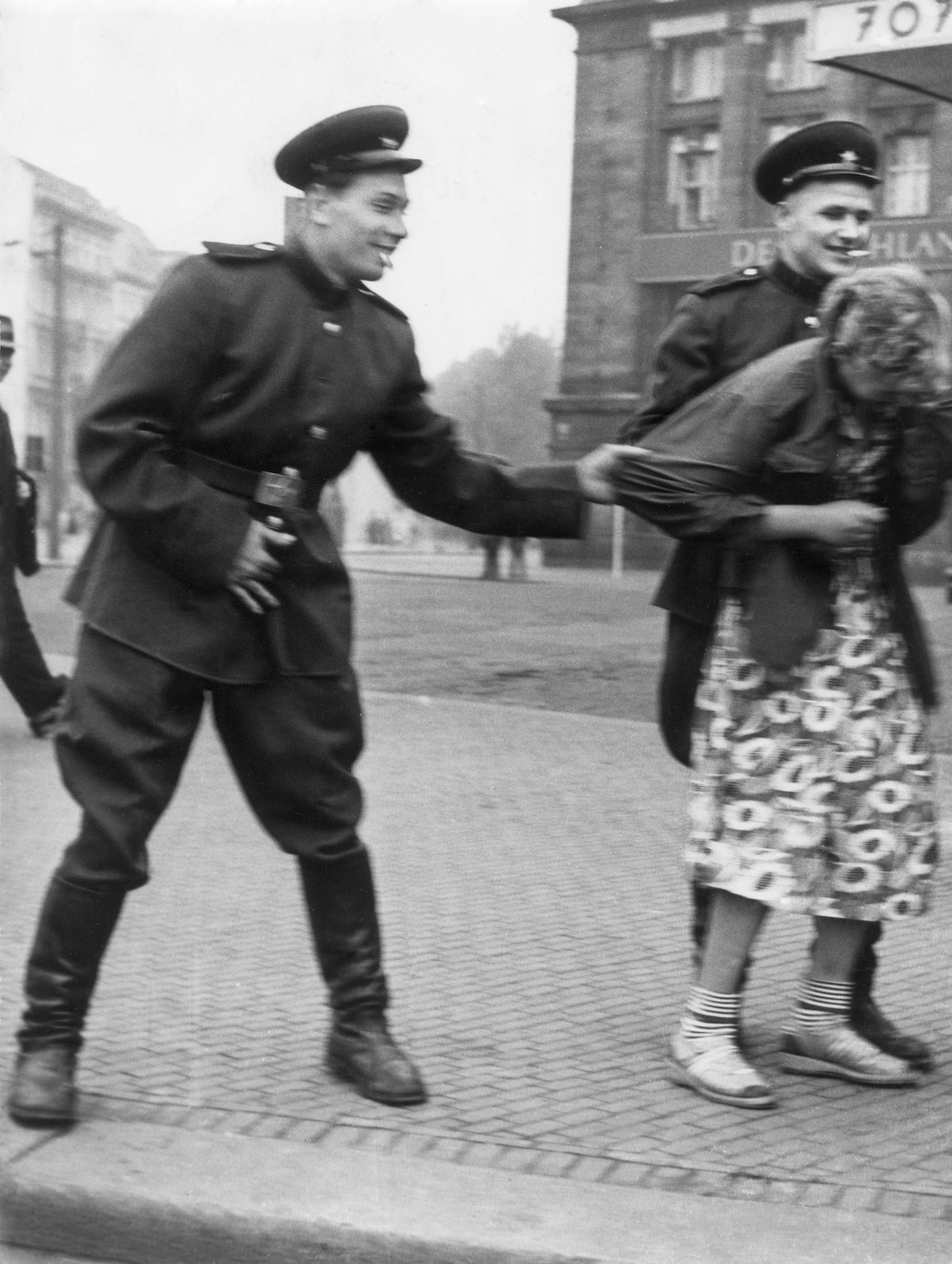 A scene from 1945 or 1946 in the Soviet Zone: Red Army soldiers harass a passer-by at Leipzig Central Station.PA/Ullstein Bild

Berlin-Berlin's approval of a replica Korean peace statue to commemorate sexual violence by Japanese soldiers during the Second World War in the Pacific region can only be described as neurotic. First, the project by the Berlin Korea Association was blatantly misunderstood and seen by district authorities as a commemoration against general sexual violence. Then, when it emerged what it was actually about, it was briefly forbidden, and then tolerated. Now it's headed to court. Historian Miriam Gebhardt says it's would be better to finally remember the suffering of the estimated 860,000 women who were raped by Allied soldiers in Germany (more precisely: during flight and expulsion and in the four occupation zones) after the Second World War.

Berliner Zeitung: Ms Gebhardt, what does the privately initiated Korean "peace statue", which is the subject of controversy in Berlin, have to do with the crimes of the Allies against German women? Why is there a connection?

Miriam Gebhardt: First of all, I would like to say that the topic of sexual violence during and after wars needs more attention overall. To always dismiss it as collateral damage is really not appropriate in light of the individual suffering that continues to be felt over generations. And I consider the commemoration of the so-called "comfort women" of the Japanese army to be more than justified. I fully understand that the Berlin Korea Association is seeking a political confrontation with Japan. But how should this affect German rape victims or their descendants, when the German public is primarily concerned with incidents that happened far away in the Pacific region? Once again, a large group of victims of the Second World War is being overlooked.

Why has there been no commemoration to this day?

The reason we have such a hard time talking about the victims of rape by Allied troops in Germany between 1945 and 1955 is that we must not only take the victims' perspectives into account, but also the historical context. And this violence against women in their own country stands across from the crimes committed by Germans during the Second World War. The rapes are a consequence of the German war of aggression. Nonetheless, I think it would be right to first acknowledge this suffering.

Shortly before our conversation, you sent me a link to a photo of a memorial plaque at the Lilienthalstraße Cemetery in Berlin, commemorating the "victims of expulsion, deportation, rape and forced labour". Is that an official memorial?

I believe the only memorial stone I know of was the initiative of an association of displaced persons (Vertriebenenverband). After the war and during the hot phase of the Cold War, they drew a lot of attention to the crimes committed by the Red Army against Germans. But that was a very one-sided perspective. And a perspective that was also politically questionable, because one has to suspect that it served revenge motives.

And the rape victims did not and still do not have a politically neutral lobby?

First of all, of course, it was the Germans who had to come to terms with their own crimes, and I think that is correct and important. Beyond that, sexual wartime violence is an extremely shameful topic, and when one thinks of one's own war victims, there are, in a way, more heroic victims than raped women - and men too, by the way. The soldiers come first in the memory of one's own losses, and then come the civilians who died in the bomb shelters.

Photo: Oliver Rehbinder
Miriam Gebhardt
is an historian, writer and associate professor at the University of Konstanz. In 2015 she published her study When the Soldiers Came: The Rape of German Women at the End of the Second World War. In 2019, in We Children of Violence, she dealt with how these experiences of violence have shaped those affected and their descendants to this day.

Why is sexual violence so shameful?

Rape by foreign troops shames a patriarchal society because it shows that the men could not defend their own women. This also makes a defeat in war a defeat of masculinity.

So it wasn't out of timidity that it was considered presumptuous to accuse the liberators of these crimes, but feelings of castration that kept society from addressing the rapes?

You have to distinguish between different phases. First of all, it was indeed, as you say, within the context of West Germany's alliances, difficult to denounce the sexual violence of the US army. In East Germany as well it was impossible to talk about crimes committed by the Red Army. In my book When the Soldiers Came, I pointed out that they even turned the tables and morally condemned the women who got involved with Allied soldiers. These were called "Ami sweethearts" or "Russian whores". The problem is that there were no grey areas: the women who entered into consensual relationships, the women who had to prostitute themselves and the women who were raped were all lumped together as "traitors to the fatherland".

It is striking that the female body was apparently still seen as public property in post-war Germany.

Sexual violence is a weapon of war. On the one hand, there is the ethnic component of destroying homogeneity through forced impregnation, thereby damaging the "body of the people". On the other hand, it aimed at creating desolidarisation in the enemy society, such as when respectable women suddenly became social rejects, which could be observed very well in smaller villages. And then there is a third facet of war-related sexual violence, and this is the dynamic that this creates within the army. Armies with a high fluctuation rate in particular tend to do this: the communal rape of the enemy's women brings the soldiers together. They are then "partners in crime". What seems important to me is that, as I said at the beginning, sexual violence is not considered a quasi natural part of warfare, but that it is clear that it is a characteristic of a certain military organisational structure, a characteristic of a certain gender order in society and also a characteristic of a certain type of warfare. There is no historical continuum here: this is primarily associated with the "total war" of the 20th century.

Dutch journalist Griselda Molemans has drawn attention to the fact that Japanese soldiers on the island of Java during the Second World War raped, among others, German women, the women of an allied state. What symbolism - apart from individual suffering - lies in this?

This phenomenon was examined by the US historian Mary Louise Roberts in the case of the US Army when its forces arrived in England and Normandy and began raping the women of the Allies. In her study What Soldiers Do she shows that these crimes were based on an image of European women that was established in American society and coarsened in American military newspapers: the European woman as a particularly liberal or immoral woman who ,wearing make-up and fur, promised all kinds of enticements. The images that then appeared in the US press of soldiers surrounded by European women and being pelted with flowers were seen as a promise of the rewards that awaited young men when they set off for Europe. The Red Army also cultivated an image of full-figured Western women who wore fur coats at the expense of the subjugated Slavic peoples. This was part of the war propaganda. Furthermore, in war the enemy was feminised everywhere anyway and portrayed as a body to be subdued - although, paradoxically, rape was at the same time prohibited. It was punishable by death in the military!

In the foreword to the paperback edition of your book you write that with the arrival of many refugees who had experienced sexual violence, we Germans were handed a chance to show whether we had learned anything from our own history. What did you mean by that?

New Year's Eve in Cologne 2015/16 showed that there is still a big elephant in the room, namely: "The foreign, possibly dark-skinned man harasses and rapes German women in her own country!" That was supposedly the moment when the mood [towards refugees] changed and the "welcoming culture" was over. And in this respect it is important to me that we are aware that this issue has not yet been dealt with in our country, but continues to smoulder as a subcutaneous wound. And specifically, we must also ask ourselves whether it is optimal for Syrian and other women here in Germany to be living together with men who may have raped them while they were on the run. In order to strengthen empathy with today's victims, it would certainly be useful to remember the 860,000 German victims of that time. This is one of the reasons why I interfered in the discussion about the peace statue for the "comfort women".