Ten famous places in Berlin that made history and no longer exist.

A look at some of the city's fascinating buildings and landmarks that vanished from the map long ago.

Berlin - There yesterday, gone today. During the 20th century, war and division led to the disappearance of countless iconic buildings from the cityscape. Ten stories about ten vanished places.

Concerts, dance competitions, boxing matches, a mountain railroad, a swimming pool and fireworks every night- but also Africans and dwarves on display in human zoos. All of this could be found in the largest amusement park in Europe, Luna Park. August Aschinger, a restaurant chain owner, and Bernd Hoffmann, a former chef at the Kempinski Hotel, opened the Terraces on Halensee in 1904.

Modelled after Coney Island in New York, it was renamed Luna-Park in 1909. The park closed from 1914 to 1920 due to the First World War and it later suffered from the economic crisis of the 1920s. The site closed forever in October 1933. Today, the A100 autobahn crosses the former grounds of the park. What remains is Halensee lake, where Berliners swim just as they did back then.

The story of the Kroll Opera begins fittingly: with a ball. The opera house just a stone’s throw from the Brandenburg Gate was named after its builder and was family-owned from 1844 to 1894. From around 1927, it gained notoriety as a stage for the avantgarde.

After the Reichstag fire of 1933, the parliament moved into the building. It was here that politicians killed off the fledgling democracy of the Weimar Republic in March of the same year with the Ermächtigungsgesetz, the Enabling Act which handed Hitler the power to form a legal dictatorship. The Kroll Opera was partially destroyed during the Second World War. What remained of it was cleared away in 1957. Grass covers the spot in front of the Reichstag, today known as Platz der Republik.

The guests at Weiße Maus - mostly businessmen, underworld figures and artists - valued anonymity at the Weiße Maus (White Mouse) and many would don masks while there. The cabaret on Jägerstraße in Friedrichstadt (today part of Mitte) opened in 1919 with a scandal: there were nude dancers at midnight.

The venue's star was Anita Berber. When a guest called her performance pornographic, she bashed him in the head with an empty champagne bottle. Weiße Maus saw its last dance in 1926. Today, the Quartier 206 office building stands in its place.

It was designed to be the “people’s house” and that’s exactly was it was. The Palast der Republik opened its doors in 1976 as the seat of the East German parliament - but also much more. The building with broad windows and lavish ceiling lamps in its foyer, ridiculed by locals as “Ballast der Republik”, “Palazzo Prozzo” or “Erichs Lampenladen” (Erich Honecker’s lamp shop), also hosted concerts and shows with international stars, dance events and catwalks.

The Palast housed restaurants and bars, a disco and a bowling alley as well as a theatre. History was made in the building when, on 24 August 1990, the East German parliament voted to unite with the West. The building was shuttered the same year due to asbestos contamination and finally demolished in 2008. The Berlin Palace, which was torn down in 1950, was rebuilt in its place - and is now known as the Humboldt Forum.

One of the most magnificent buildings of the Wilhelmine Period was built between Friedrichstraße and Oranienburger Straße in an impressive 15 months. The five-storey structure was made of reinforced concrete, and crowned by a dome. Below were stores, restaurants, theatres and concert halls - the Friedrichstraßenpassage, a kind of glamorous mall. In 1914, just five years after opening, the Friedrichstraßenpassage filed for bankruptcy. Prior to the Second World War, the building was used by appliance brand AEG as well as Hitler’s Nazi party.

After the war it was occupied by the Free German Trade Union Federation, businesses and retailers. Much of the structure was demolished in the early 1980s but in 1990 - after the reunification of the city - artists squatted the remaining wing of the building. Tacheles was born. The legendary art centre had studios and exhibition spaces, a cinema, a café and put on techno parties until the occupants were evicted in 2012. A new complex with stores, offices and apartments is sprouting out of the ground. An art space is planned for the former Tacheles, which is all that remains of the original Friedrichstraßenpassage.

Scarcely any building symbolises the former division of Berlin as emphatically as the Versöhnungskirche (Reconciliation Church). After the Second World War, this Protestant church, built on Bernauer Straße in 1892, stood on the front line of the Cold War. The church was located in Mitte (in the eastern Soviet sector) while the majority of the congregation came from Wedding (in the western French sector).

On 13 August 1961, East Germany sealed off the sector borders. Eight days later a wall went up and prevented West Berliners from accessing the Versöhnungskirche. In October, East Berliners were banned from the church. Later, East German border guards used the its steeple as an artillery stand. In 1985, the GDR completely demolished the church. Today, the Kapelle der Versöhnung (the Chapel of Reconcilaition) stands in its place. 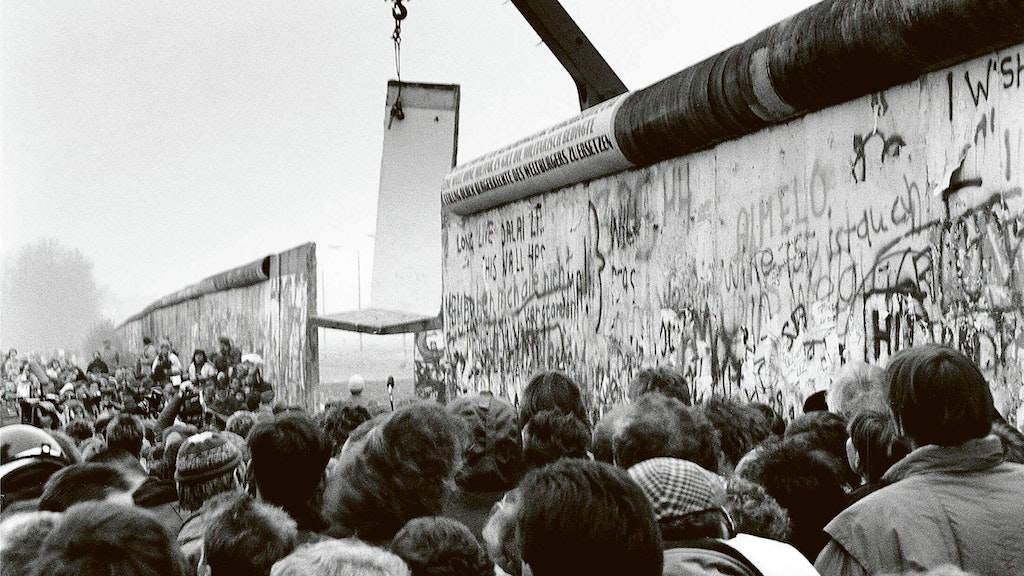 Magazine B History: 100 Years of Metropolis

It was hard not to have a good time here. A million people flooded into the one-of-a-kind Haus Vaterland every year after it opened in 1928. Restaurants featuring national and international food and drinks took up six storeys. There were all kinds of music, dance and variety shows.

The Rheinterrasse, or Rhine Terrace, was especially beloved. In an artificial landscape with a view of Rheinfels Castle and the Lorelei Rock, thunder and lightning were simulated once an hour. After a large fire caused by bombing in 1943, the sale of food and drink was severely restricted. Haus Vaterland was finally torn down in 1976. An office building stands on the site today.

While many of things have changed in Berlin, one thing remains the same: the love of sport. When the Sportpalast opened on Potsdamer Straße in 1910, it was considered a sensation for its artificial ice rink alone. Spectators flocked to it for riding tournaments, boxing matches, beauty contests and the Six Days of Berlin cycling spectacle. Political parties would rent the Sportpalast for rallies.

From 1933, only the Nazis were permitted to use it. Propaganda Minister Joseph Goebbels held his most infamous speech here on 18 February 1943 in which he promised his audience “total war”. The Sportpalast was torn down in 1973. Today, the Pallasseum stands in its place - a huge 1970s residential block under landmark protection, nicknamed “Sozialpalast”.

“Attention. Attention! This is Berlin at wavelength 400m!” With these words, Walter Krutscke ushered in the era of German radio at 8pm on 29 October 1923. He was speaking from Vox-Haus, a building on Potsdamer Straße that belong to the Vox-Grammophon Gesellschaft. The company provided an attic room for the country’s first radio broadcast. The working conditions were modest. Wool blankets divided the room into a recording area and a technical area.

The programme for Funkstunde, as the show was called, was ambitious. It featured not only music played from gramophone records but also Schumann compositions, for instance, performed live on location. The Vox-Haus was demolished half a century later because of its unattractive location along the Berlin Wall. Today, a wing of the Kollhoff-Tower stands there.

The synagogue, which opened its doors on Fasanenstraße in Charlottenburg in 1912, was a symbol of the Jewish community’s growing self-confidence. It is a monumental building with three domes inspired by the early Christian Byzantine churches. SA stormtroopers set the synagogue on fire during the pogroms of 9 November 1938.

The Jewish community was forced to sell the property to the Reichspost, the imperial postal service. The building suffered further damage during Allied air raids in 1943 and it was demolished in 1958. The Jüdische Gemeindehaus (Jewish Community House) has stood in its place since 1959. 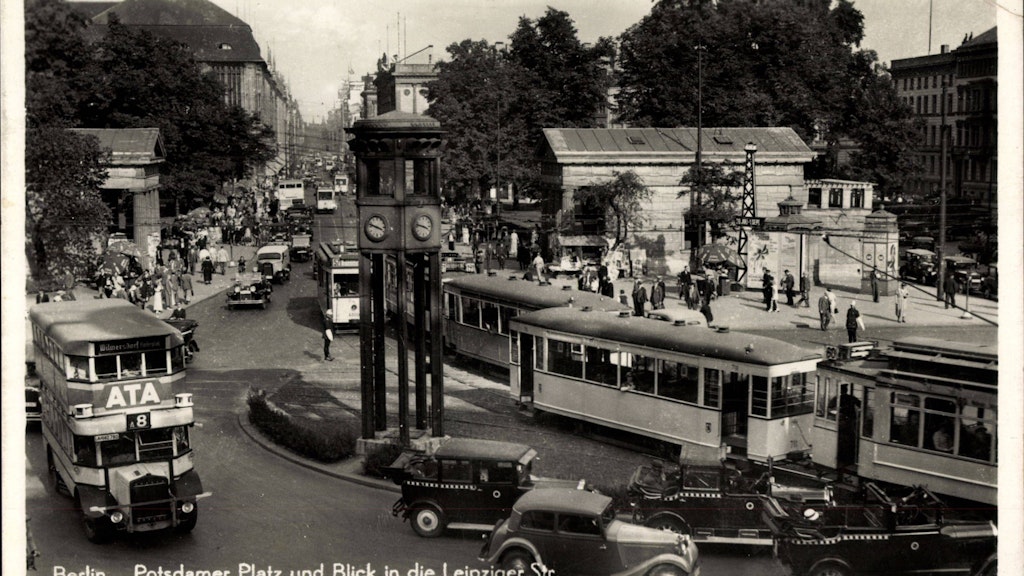 Metropolis How well can you do on the big Berlin quiz?