Thousands of refugees live in appalling conditions on Europe's outskirts. The No Nation Truck project is on a mission to bring them food and solidarity.

Berlin - Benny and Gabi are initially skeptical about meeting for this report. "We don't want this to be a hero story, the project should be in the foreground," the two activists say, referring to their No Nation Truck: a converted heavy goods lorry with a built-in kitchen, with which they want to cook for refugees at the external borders of the EU.

The images from slum camps in Moria, Greece, or Lipa, Bosnia, where people freeze and starve among the camps' burned-down remains, shook the Berlin collective behind the project. That's why its activists have been working for a year on a kind of food truck for refugees, which is due to set off in February. In principle, it will be like the hipster food trucks that city dwellers queue up for at lunchtime, but much more socially conscious.

The collective has agreed that Benny and Gabi will talk to the press, but without mentioning their last names and without photos. The truck is currently in the workshop in a secret location anyway, so the pair, aged 27 and 26, bring their own photos to the Rock 'N' Roll Herberge, a Kreuzberg bar that often hosts solidarity kitchens for those in need. Their project is financed entirely by donations.

"The truck is for us to cook and distribute large quantities of food, in different places, almost like a traveling kitchen," Benny explains, wearing a beanie and mask - not to remain anonymous but because of the cold and corona. He adds that they also want to document border violence with questionnaires.

The truck itself is  kitted out with medical supplies for the injured and sick, a filtration system for clean drinking water and solar panels on the roof for electricity. "This lets refugees charge their phones," Gabi explains. "Phones are fundamental on the ground; people use them to communicate, get information and navigate their surroundings."

Benny and Gabi know what they're talking about, having helped as volunteers in and outside camps on Lesbos, in the Balkans or in France and having seen what people on the ground are often missing. The core of the collective consists of 10 people, as well as other supporters in Germany and abroad.

"We came together as a crew and asked what could be done better, what still wasn't out there," Benny says. "And that's why we got this vehicle."

The 7.5-tonne truck is just under 8m long, including just under 6m of kitchen inside. Much of the kitchen is made of wood in a U-shaped design and only 2m wide. "It's not a kitchen like you get in a snazzy apartment," Benny says. If there are too many hungry people lining up, he says, they're more likely to cook with the gas stove outside.

There are also three to four beds for volunteers to sleep in. "We want to be on our mission continually and be able to react flexibly to the new routes refugees are taking," Gabi explains.

They hope to hit the road in mid or late February. Corona has caused many delays. For example, information events or solidarity concerts to collect donations have long been out of the question. Originally, they wanted to take the No Nation Truck to the Balkans, but travel restrictions such as PCR tests have complicated the situation. Now the plan is to first head to camps in France - on the border with the UK. "The police there cleared out hundreds of improvised camps in the most brutal way in December alone," Benny says.

You might think that in wealthy countries like France or on the EU borders, there would be sufficient funds to provide decent housing for refugees. What's more, many non-governmental organisations (NGOs) are on the ground, such as the International Organisation for Migration (IOM) or the UN Refugee Agency (UNHCR).

Benny speaks of a "brutal and deadly deterrence policy in the EU," criticising existing structures. "In Moria, an external NGO built showers for the camps - since the Greek state couldn't get that done." Benny and Gabi praise the international initiative No Nation Kitchen as a role model.

As the two walk through Kreuzberg, masked-up against corona, you start to wonder why their group is so secretive about the good it's doing. "People have already shown up at local initiatives as volunteers and then documented or sabotaged things without permission," Gabi reports. She is referring primarily to members of rightwing networks and neo-Nazis. 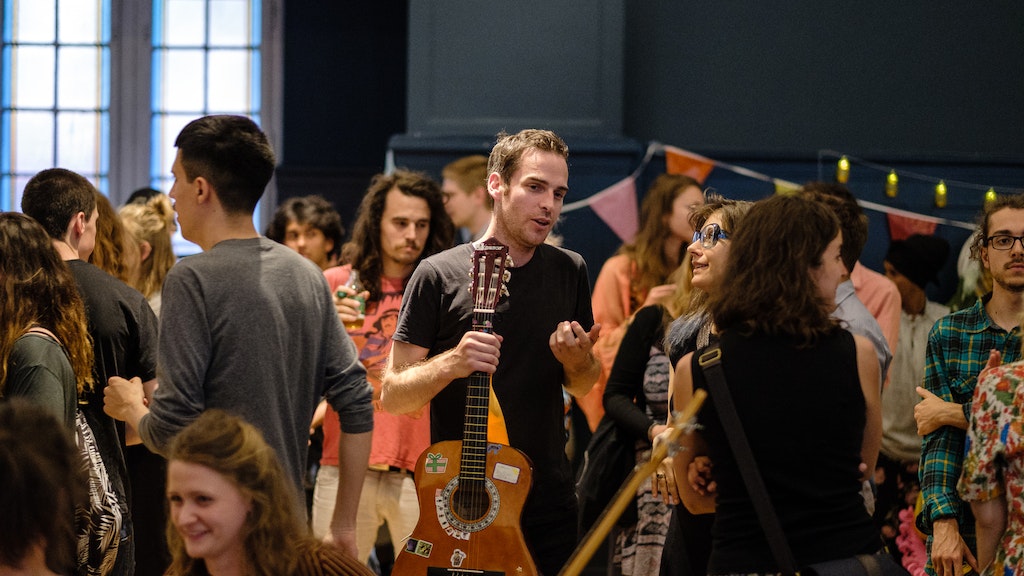 Corona and communityGive something back to Berlin - despite corona

But they also fear repression from authorities, even though they are officially not doing anything illegal. They draw a comparison with search and rescue initiaties in the Mediterranean. "When it comes to the authorities, there is still a difference between what is legal and what is right," Benny says. "At the external borders, they often just push people back, even where they're not supposed to." Gabi says simply that she "isn't keen on getting punched in the mouth".

Nevertheless, the food truckers invite anyone who is interested to join them. Anyone who doesn't want to drive abroad with a truck can ask in their neighbourhood where and how they can help refugees. In the end, Benny and Gaby allow a picture to be taken, but only from behind.

"This will really make us look like criminals," Gabi says and laughs. But at least ones with a social conscience.