Alessandro Michele brilliantly rejuvenated Gucci. While working for L'Uomo Vogue, our writer followed the turnaround from Milan. What's next for the brand? 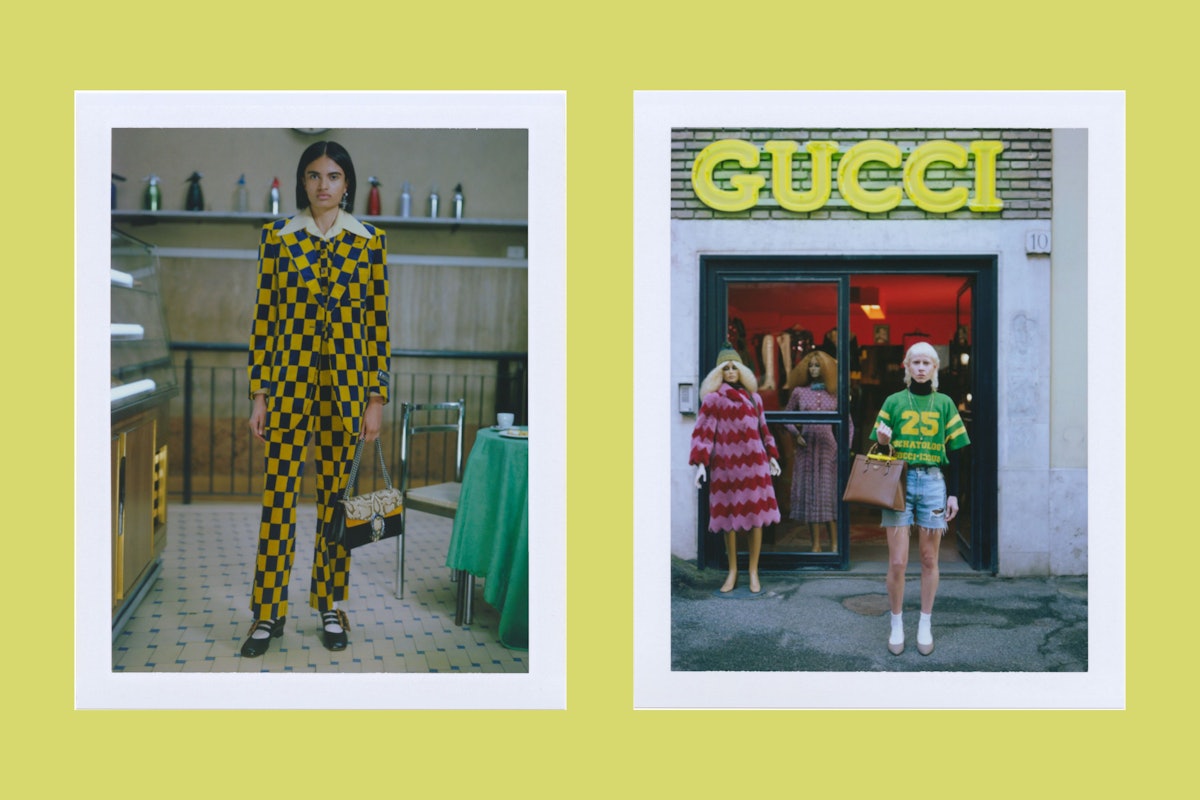 Checks and gender balances: The latest collection was presented in the online mini-series Gucci Fest in November 2020.

Milan-Considering fashion an ecosystem that produces expensive clothes, full of glitzy people and crazy events, is a bit démodé. This was the reality back when Maurizio Gucci and Patrizia Reggiani were living la vida loca during the glamorous 1970s and 1980s, which is the narrative American director Ridley Scott (of Blade Runner, Gladiator, The Martian fame) presents in House of Gucci, scheduled to come out in US movie theatres on 24 November.

The movie is based on the 2001 book The House of Gucci: A Sensational Story of Murder, Madness, Glamour, and Greed by Sara Gay Forden and the duo is portrayed by Adam Driver and Lady Gaga. Al Pacino plays Aldo Gucci, Jeremy Irons is Rodolfo Gucci and Jared Leto is Paolo Gucci.

The strange thing is that, at the time of writing, Pina Auriemma, a key figure in the dynasty's story and the one who arranged the murder, hadn't been cast yet.

“We were the most beautiful couple in the world,” said Maurizio's ex-wife in an Italian TV interview a few years ago. But this whole fashion microcosm doesn’t exist anymore. The world is changing and so, too, is the fashion system, or at least it’s trying to.

Most of the major brands are currently attempting to turn their business models into creative cultural hubs instead of mere fashion companies. The journey is not an easy one, since loyalty, marketing and creative vision must be combined with the right balance and sensibility. What Gucci has built since January 2015 with the debut of Alessandro Michele– born in 1972 and raised on the outskirts of Rome –as creative director is still the best case study we have seen so far.

His first collection was conceived in one week by Gucci’s in-house design team led by Michele even though he hadn’t been yet officially appointed at the helm of the Italian maison (which happened two days after the show). The result was a boom, with Gucci still ranking among the world’s most successful brands in media engagement and community building. Since 2015, Gucci’s revenues have more than doubled, also thanks to smart moves by its CEO Marco Bizzarri, and it kept growing and growing until the pandemic unexpectedly hit the scene.

Sales were projected to reach €10b in 2020, yet Covid-19 has burst that dream. In the last quarter of 2020 revenues on organic sales fell by 10.3 per cent and in the previous three months the drop was 8.9 per cent, compared to the same period in 2019, which saw a 10.5 per cent rise. Of course, coronavirus containment measures led to travel bans and store closures.

On the other hand, Kering, the French conglomerate which owns Gucci, doesn’t seem too concerned. To quote Henri-François Pinault, Kering Chairman and CEO, “The new strategy is about being always ‘on’” and about generating “much more excitement, much more of an emotional link between the brand and clients”.

Such has been the mood set by Michele since he arrived. For sure, the powerful at Kering are fully aware of the scope of the transformation he has initiated and that half of what has been done so far at Gucci was not just marketing razzmatazz linked to a single collection, but rather a deeper, cultural evolution that created a real connection with consumers.

How did Gucci become so likeable?

Terms such as community, family and sisterhood are often used today in style brands’ desperate attempts to engage the sympathy of younger clients, make them feel part of something bigger than their own everyday lives and then sell them frivolous and ultimately meaningless products. Even though we are all perfectly aware that a company like Gucci cannot leave anything to fate’s goodwill, in contrast to other brands that stay put in their ivory towers (pretending to build a following by just hiring a designer of the moment or bombarding clients with social media slogans devised in marketing strategy meetings), Gucci made all the right moves - by behaving spontaneously and genuinely while remaining loyal to both their brand identity and their customer base.

So let’s look at how, exactly, this was achieved. For starters, Michele opened the doors of the house to the public right from the beginning of his creative tenure, allowing for a more intimate and even homey approach. At his debut Gucci show, he took the final bow with the whole design team. Since then, he and his collaborators have set a jolting new standard of originality in casting and campaign visuals. Michele’s vision erased the boundaries between genders, races and body shapes, thus firmly establishing his credo that everybody can be part of the Gucci-verse. The new message was that of the classic, generous dinner party host: Come as you are. In marketing language: inclusivity.

“When Gucci started, it was another age. If you bought a Gucci bag, you belonged to the jet set,” said the designer in a 2018 interview with Another Magazine. “The jet set doesn’t exist anymore. I’m trying to speak to the world, to everyone. It’s beautiful that people go into the store but I don’t want them to feel they have to. It’s more that you can be exactly what you want to be. More than anything, fashion is an expression of a way of life, a point of view. It’s like a universal language. And if you work with empathy towards people, it’s very powerful.”

Gucci as a prime example of an inclusive brand

With this attitude, he reached a very wide audience around the globe. To some, his shows may look a bit too flamboyant or otherworldly, yet when analysed in-depth they are not. In fact, turning pretty wearable clothes into a powerful show with sophisticated paraphernalia only boosted the popularity of the brand. Another trick up his sleeve: Gucci collections are conceived in direct collaboration with merchandising and not, as often happens, in two consecutive steps. The end result is that everything looks organic in the narrative, while still oozing commercial smarts.

Or how about this: Alessandro Michele kept his old Instagram account with his nickname @lallo.25 for some time before switching it to his real name, but he preserved it as a personal diary and not just a hall of fame for personal achievements as many of his designer colleagues have done. This made him a more accessible superstar with a down-to-earth vibe. These are just drops in the ocean of initiatives that he and the brand launched to become more inclusive, with the end goal that others will follow.

CEO Marco Bizzarri is also a firm believer in inclusivity. In interviews, he speaks openly about Gucci’s strategy of not being focused on a certain age demographic such as Millennials or Gen Z. Instead, the label focusses on a mindset–and when working like that, you can’t fail. Consider an aspect of this approach that Bizzarri divulged to The Business of Fashion: “We have this executive committee called Comex; so I have created one called ‘Shadow Comex ’, which is made up of people around 30 years old who I ask to discuss the same topics that I discuss with my other colleagues, to see what feedback we can get. It is just a matter of creating a way [to ask] questions [and get] a different perspective”.

Just another example of the careful work they're doing on their brand identity, by letting people in and never becoming too sure of themselves.

Many other moves - both wide-ranging and minute - have been made to amplify the inclusivity message at what Gucci now envisions as a 360-degree style brand. The 2019 beauty advertising campaign to promote the new Gucci lipsticks, for instance, showed unusual, quirky smiles instead of the usual model-perfect lips and teeth. Under the provocative claim “For the bold, the bright and the beautiful” in a quasi-vintage layout, the  campaign once again celebrated different standards of beauty.

Granted, the route to success hasn’t always been plain sailing, and there have been naïve stumbles. One was the appropriation of Dapper Dan’s jacket design in 2017 (it blossomed into a collaboration with the iconic Harlem-based studio), another was a social media blacklash about what many saw as a blackface turtleneck design in February 2019.

Nonetheless, this year Gucci is celebrating 100 years since its founding in Florence. Since 1921, the company has evolved into an incubator of progressive status and now stands for sexual liberation (just remember what Tom Ford did there in the 1990s, topiary-cut pubic hair and all) and gender inclusivity. Not least, I would say, due to its recently established deep connection with young people.

To recoup the losses incurred during the last quarters of 2020, luxury analysts have pointed out that the more classic-minded adult demographic could prove instrumental in widening the Gucci audience and thus boost sales. In Europe and the US at least, this might be a necessary adjustment of their brand identity in the wake of all-over disruption caused by the pandemic. And I’d bet my vintage horsebit loafers they’ll have the ability to put on a new skin once again.