The myth of German order

It’s said that Germans love order – and that their society is a paradigm of orderliness. It’s nonsense – and in 2021, it’s less true than ever. 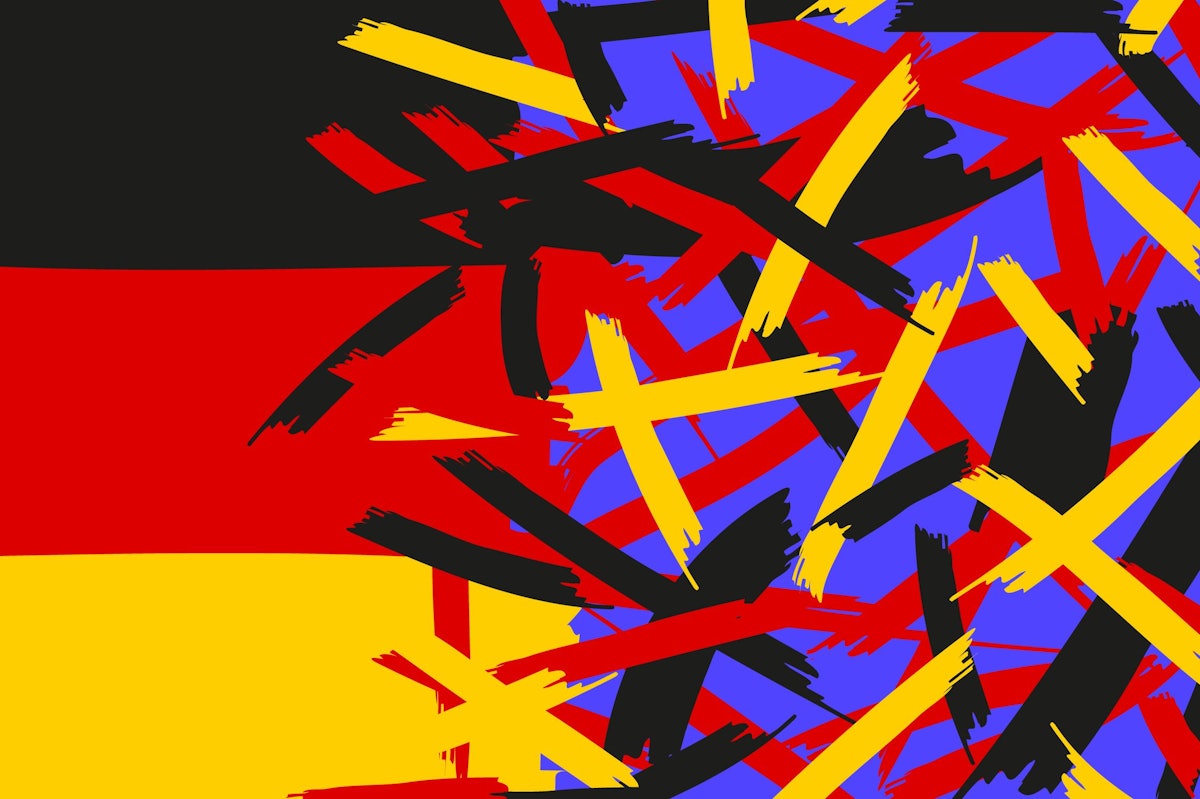 Germans love order? The cliché needs an overhaul. It’s based on outdated misconceptions about the country and its citizens. Germany is messier than people realise.:
Stephanie Franziska Scholz

Berlin-I got a curious letter from my landlord last week. While most renters at the end of November were given notice of whether and by how much their rent will be reduced thanks to the capital city’s new Mietendeckel rent control law, mine waited until this month to inform me that they would be keeping the difference between my old rent and my new rent-controlled fee – in a sort of escrow account – and only return the excess should Germany’s top court find that the law is constitutional later this year. You read that correctly: my landlord is illegally keeping what is legally mine under existing law. In most places, that could be considered theft.

The lawlessness of German landlords is legendary. It’s common for a Hausverwaltung to add a few hundred euros to your annual side costs, hoping you won’t notice. A friend gets a lawyer to check her side costs and every year she gets a hefty refund. The tricks property owners deploy to bully tenants are well-known. A few years ago, to make a building more profitable, a Berlin landlord even imported en masse large families from Romanian slums to move in to frighten off old low-profit tenants.

This might seem shocking to outsiders but it’s nothing new to anyone who lives here. Germany is not the beacon of order and efficiency the world believes it to be and the country itself should stop perpetuating the myth of “Ordnung muss sein” (Order is a must).

It’s a cliché foreign journalists love to entertain and perpetuate. Last June, the BBC did it again: “What makes the Germans so orderly?”

It’s a cliché with a history. In 1934, a Time cover featured Paul von Hindenburg, the last president of the Weimar Republic, with the words “Ordnung muss sein!” – imprinting the cliché into the collective consciousness of Americans.

Germans spread it, too. In 2012, Peter Zudeick wrote in a Deutsche Welle column: “Order is the regulated condition. No matter what. And order is half of life. So goes the German saying. Let others take care of the other half.”

I disagree. The cliché needs an overhaul. It’s based on outdated misconceptions about the country and its citizens. Germany is messier than people realise.

Germans pretend their country is built on the first kind. Having lived here for two decades, and at the risk of committing a huge over-generalisation, I’d say much of day-to-day life in Germany is marked by the second kind – the leftovers of oppressive Prussian order and bureaucracy. And so I put it to you: The idea that Germany is a particularly well-ordered society is  a myth.

“Ich bin da sehr deutsch,” German friends and colleagues sometimes say, meaning they have a penchant for correctness, discipline, order – the “German virtues”, as if the nation had a monopoly on them.

In reality, the country is marked by far more lawlessness, sloppiness, inefficiency and incompetence than its self-image suggests. Daily life is bureaucratic, pointlessly complex or involves outdated systems and technologies. Interactions with institutions great and small are often difficult.

This is the low-hanging fruit. Big German cities are a mess: Homeless people slumped outside of stations and ignored by the state. Beggars before every bank for whom no one seems to care. Cigarette butts everywhere. Malfunctioning bins – why can’t German engineers design a reliable trash can? Graffiti on every surface. Trashed flowerbeds. Vandalised benches. Hardly any public toilets. It’s normal to pee in the bushes at the playground. In short, public space suffers huge neglect.

Exhibit B: BER and other monstrosities

I won’t revisit every BER embarrassment. The airport opened (nine years late) in fall, but new failures keep emerging. Now, security staff are being electrocuted by their equipment while checking hand baggage. Four staff were hospitalised. The trade union Verdi wants the terminal shut down. The airport refuses to fix the equipment. Is BER cursed? Or is Germany bad at managing such things? The exorbitant Elbphilharmonie in Hamburg and Stuttgart 21 train station debacle would suggest it.

Getting a PCR corona test is of course tedious and only free if you display symptoms. It would make sense to offer free testing widely as in Denmark, where I easily and quickly got a test – all in English (unthinkable in German bureaucracies). The void has been filled by private test centres offering the less reliable quick tests. In Berlin, these centres are “easier to open than a snack bar” and practically unregulated – a bad idea when dealing with a lethal, highly contagious disease. If that’s not disorderly enough for you, private test centres also often fail to tell health authorities about positive tests – or at least do so too late.

Of course, one could write off most of the above as the failures of the “ failed state” Berlin, a city run by incompetent granolas and Marxists. But the mess extends beyond the shabby chic capital. Take the pearl of German industry, the car mafia – sorry “carmakers”. To this day, the term deutsche Ingenieurkunst is thrown around with glee, as if the emissions cheating done by nearly every German automaker hadn’t blown a hole in the myth of German Ordnung.

And the big names kept flogging diesel until the cows came home instead of investing properly in electric cars – before Elon Musk waltzed into town and showed BMW, Mercedes and the rest of them how stuff gets done – i.e. by building a giant car factory in Brandenburg on a “provisional” building permit.

But even Musk’s near-overnight appearance seems fishy. I’m not going to say corruption was involved because that would be libelous, but it’s safe to say that the Brandenburg environmental agency – run by famously impartial “Prussian” bureaucrats – just might have let itself get duped by the world’s richest man. We’ll probably never know the details. Meanwhile, Daimler is closing its motor factory in Berlin-Marienfelde, laying off thousands and moving production to China. What was that about Germany’s “social market economy?” We shouldn’t be too mean to the automakers – after all they’re paying the bills, right? Except every few months the execs come begging for more corporate welfare, er, subsidies, to pump into their electric mobility concepts – and sell more “clean diesels” while they can. Lol.

This one's a real mess. While Denmark set up citizens' e-boxes years ago as a one-stop place for all things related to the state, taxes and health care, and nearby Estonia implemented e-signatures in 2002, Germany remains the class dunce in e-governance. The 10-year-old “e-perso” project was to be online identification with an ID card. The government sunk hundreds of millions into it. Thing is, barely anyone uses it, because the user experience is dismal. Whether it's registering a company or finding daycare, electronic interaction with authorities remains hopelessly primitive in Germany. You're lucky if you find the right pdf form to print out and send by snail mail. The Finanzamt has an online system but it's ridiculously complex - why the hell do we need two tax numbers, a steuerliche Identifikationsnummer and a Steuernummer?

I could go on about the lack of order in this order-loving culture. From the scandals at Wirecard, Deutsche Bank and Siemens to the Tollcollect fiasco and Cum-Ex scandal to the cascade of fake PhDs among politicians. From the failure of cops on the NSU murders to police screw-ups linked to the 2016 Christmas market terror attack in Berlin.

And despite all this and everything I don’t have space to list here, Germans continue to believe order is the defining feature of their society.

If anything, Germany has failed to create adequate structures to create a positive order that fosters well-being and trust among the citizenry. Amidst the fragments of failed reform projects remain the bitter-tasting leftovers of the old Prussian order – which serves the state before it serves the people, which obfuscates, delays and gaslights. Such an order resists progress and sees no point in improving the lives of people. Its structures are kept obscure and difficult to navigate – as in Kafka – in order to project authority but that too might be crumbling as Germany fails to keep up with the times.

I could blame Angela “Das Internet ist Neuland” Merkel but no, I blame the German people for putting her party into power four times in a row. Voters chose stasis and complacency – and the result has been a failure to deal with the social challenges of our time: digitalisation, housing, greenhouse emissions, to name a few – and, yes, corona. Merkel’s much-lauded rational approach to the pandemic masks the severe backwardness in digital governance and bringing state services into the 21st century.

The one-party rule of the CDU (at least in the West) for most of German post-war history has led to intrenched small-c conservatism in all things. Caution at every step. No experiments. Decaying systems chug on. Twenty years ago foreign media dubbed Germany “The sick man of Europe” and the country has yet to return to health.

Recently, my GP lost a diagnosis a specialist doctor had faxed her. I called the specialist to get it re-faxed. No such luck. I dropped by the GP today. Her fax machine is broken.