A diverse crowd of schoolchildren, scientists and political activists took to the streets - and their bikes - to demand urgent action to curb the climate crisis. And did it while keeping social distance.

Berlin - Thousands took to the streets on Friday as part of the Fridays for Future movement’s Global Climate Strike, calling on politicians to take meaningful action against the climate crisis.

The day’s events were characterised by risks presented by coronavirus, but organisers went to great efforts to ensure hygiene safety, marking out spaces 1.5 metres apart, urging attendees to keep their noses and mouths covered, and sharing around hand sanitiser.

The key message of the day was Kein Grad weiter (not one degree more), an appeal to policymakers to cut emissions in order to prevent a global temperature rise of more than 1.5 degrees Celsius above pre-industrial levels. In fitting with the anti-emissions message, hundreds of cyclists pedalled from locations around Berlin in a series of planned “cycle demos”.

And they’re off! There must be at least 1000 here now. They’ve got a slow start to get over Hugo Preuß bridge but after that it’s off to the Brandenburg Gate pic.twitter.com/N0D0GuoOZI

They then joined other activists gathered on Straße des 17. Juni, which leads up to the Brandenburg Gate and is close to many of Germany’s main government buildings, to send a message to politicians that stronger action is needed. A programme of speakers and musicians entertained the crowds, including German rock band AnnenMayKantereit who performed a new song written for the occasion.

Speaking before the crowd of thousands, leading climate activist Luisa Neubauer said: “People didn’t think this day would be possible, but yet again, as we have from the very first day, we’ve done it.

“What we’re doing is hard – it’s hard to do this in a world where places like California, Australia and Greece are burning, other places are flooding and people are dying. It’s hard to stay on course when we hear our politicians say they are happy with a global temperature rise above 1.5 degrees."

“How many more catastrophes do there need to be before something is done? The answer is none. We aren’t here to tell you there is a crisis – we’re here because this crisis has to stop.”

Neubauer, 24, was one of several speakers who referenced Germany’s parliamentary elections next year, which will see Angela Merkel step down as chancellor after 16 years. Activists branded the climate policy pursued by various incarnations of the governing “GroKo” (Grand Coalition), comprised of Merkel’s conservative CDU party and the centre-left SPD, a “failure”, having seen insufficient reduction of Germany’s reliance on fossil fuels. Calls sounded to make this election “the climate election”.

“The next year is going to be difficult and uncomfortable for us,” Neubauer warned. “People will want to see us give up, they will ask us difficult questions. They want us to feel despondent and hopeless – but they’re not going to get it.”

Themes of social justice also featured prominently, with the recent fire at the Moria refugee camp in Lesbos, Greece, and the international Black Lives Matter movement serving as main points of reference.

Activists from the Berlin branch of refugee advocacy group Seebrücke spoke to the crowds and called for reform of the EU’s refugee policy.

“We are already seeing climate refugees, already vulnerable people who are having to flee their homes and face more danger due to the consequences of colonialism and consumption,” they said. “This is environmental racism.”

They added: “We have to acknowledge our movement in Germany as a largely white movement, which is led by white people, and therefore we need to listen and include Black voices and voices of colour in our ranks.

“Our climate justice movement is worth nothing if it’s not decolonial, anti-racist and anti-fascist.”

The participants in the assembly at the Brandenburg Gate and in the bicycle demos were a diverse group, including children doing homework in the street, environmental groups including the World Wildlife Fund and Friends of the Earth, and Extinction Rebellion’s eery Red Rebel Brigade.

A group of scientists from some of Berlin’s major academic institutions, including Humboldt University and the Staatsbibliothek, lined the street near Central Station to cheer cyclists on as part of the Scientists for Future movement.

“Science has been saying what needs to be done for a long, long time, so the more people who get involved and listen, the better,” one of the scientists, Helene, said. “Every bicycle bell that gets rung is welcome.”

One of her fellow activists, Regine, added: “This sort of demonstration is good given the corona situation – people are moving and out in the fresh air. But it’s good to see that people are paying attention to the rules and wearing masks – we know it only takes a small number of people not complying to discredit the whole movement.”

On Straße des 17. Juni, participants said there was a great atmosphere, with people being considerate of others, following corona rules and feeling hopeful that politicians would take heed of their calls.

Josefine, 18, said: “Of course it’s difficult to hold a big demo like this during a pandemic, but climate change is a crisis too and I feel it’s been forgotten a bit because of corona. But I’m really surprised at how well it’s worked – everyone’s keeping their distance and wearing masks. Everything’s been done really environmentally responsibly as well – I like how they’ve used flour paste to mark out the spacing.”

Friends Maja and Lena were among those who are regular attendees of climate protests. Maja, 21, said: “I’ve just written my bachelors dissertation on industrial farming and I really learned just how damaging that is for the environment – so that was something I wanted to say today, that this is something we have to stop for the good of the planet.”

Lena, also 21, added: “You can see the effects of climate change all over the world, through wildfires, mass extinction and pollution. That has to change, and quickly, so that’s why we’re here.”

Critics of movements like Fridays for Future often target their demands – such as a faster withdrawal from fossil fuel energy than Germany’s target of 2038 – as unrealistic. But Georg, 23, and Leonie, 24, hope the emergency response to the corona crisis will provide some political lessons in dealing with the climate crisis.

Georg said: “The corona crisis has shown that politicians are actually able to make these big, urgent decisions very quickly. This is a real long-term issue – we have to show people that it’s not just a phase or a trend, but will still be with us and only get worse after corona.”

Leonie added: “We felt like the discussion around climate change did die down a bit because of corona, but it’s just as serious a crisis – so why can’t the response now be the same?”

Charlotte and Juliane, both 19, travelled from Saxony Anhalt to attend the demo. “Our school never let us take Fridays off for the climate strike,” Juliane said, “but something really has to change. Our generation is looking to a future with no winter, 40 degree summers, storms and God knows what else.”

More than 3,000 protest actions were due to take place around the world today as part of the Global Climate Strike, more than 400 of them in Germany. 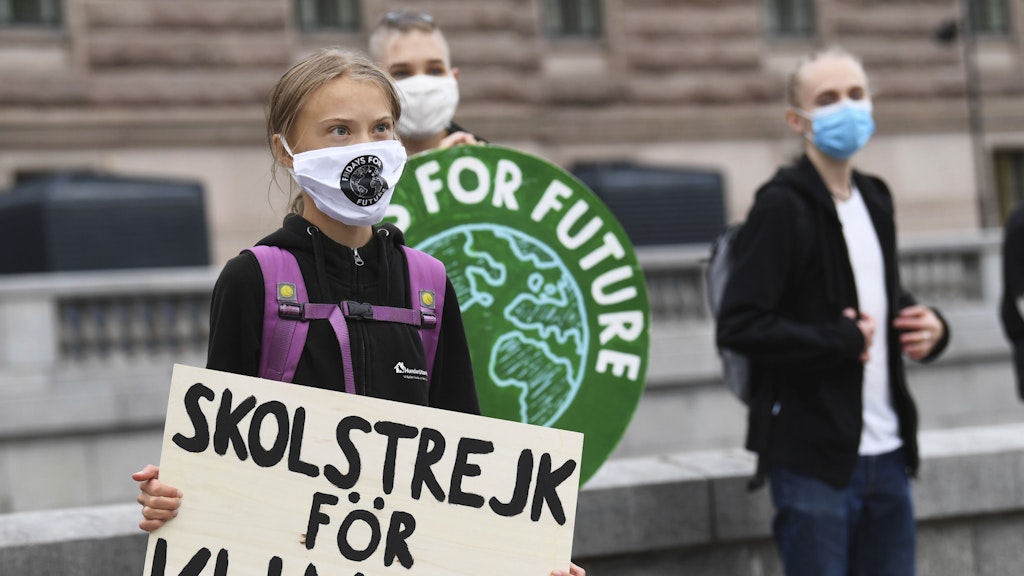 Opinion Greta was right: endless economic growth is a fairytale