Watching Wembley in the woods 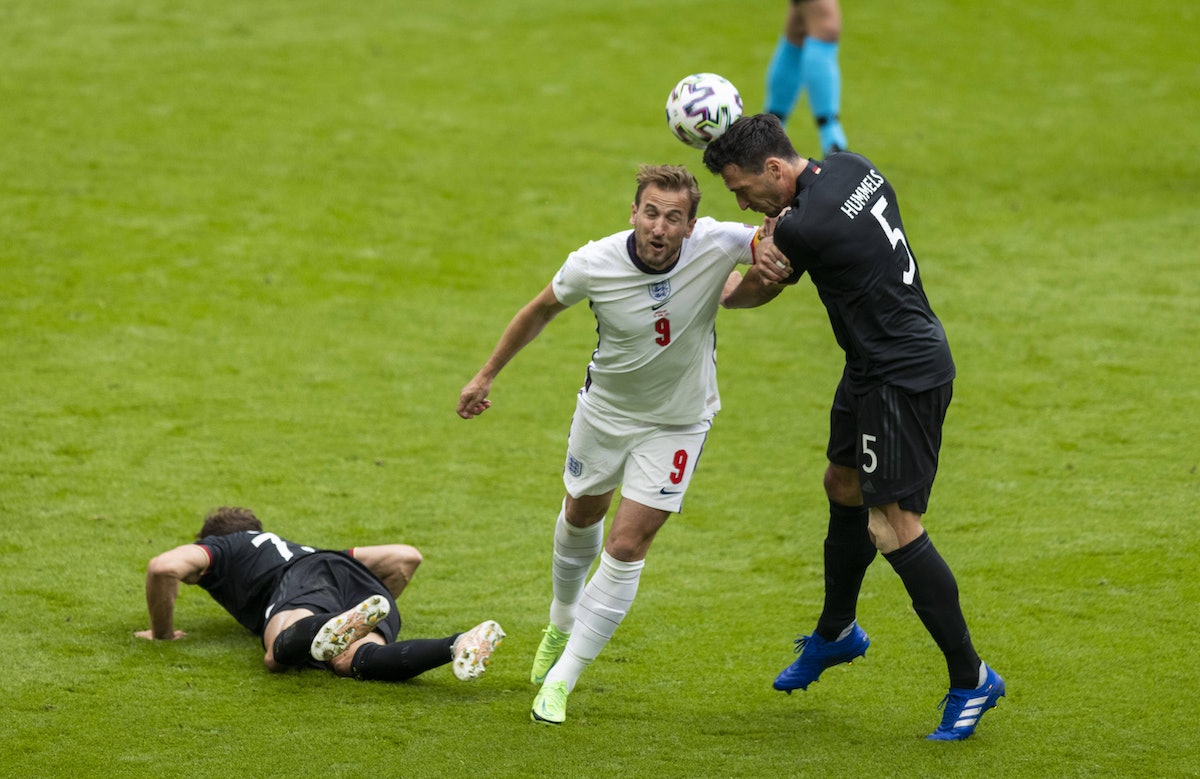 England and Germany went head to head at the Euros this week - sometimes literally.Imago

A village in Brandenburg-The little Stube was built in the 1870s, at least five different countries ago. A couple of small rooms, square, plastic-topped tables, and a terrace under corrugated plastic. H. is sat out front where she holds the fort for 12 hours a day, serving warm food and cold beer. She is in her mid-sixties.

“Will you be showing the football?”

“Of course,” comes the answer with a smile.

I laugh and say he's probably right, because we always lose to the Germans, but H. chastises him and says Germany weren't very good against Hungary, and it doesn't matter anyway.

But she's clear that I am very welcome, her guest. I don't need to be tested, she says firmly, because she won't be.

I return a few hours later. There's only H. there and a different guy, P. The flies trace jagged circles in the thick air inside, a storm is brewing outside. P. has oil under his fingernails and his collarbone juts out at an awkward angle from where he was thrown off his motorbike a few years ago. He has reddy, orangey eyes, and says the Greens won't let you have a loud bike any more.

H. finishes with a similar line when she tells me there'll be a fourth corona wave as soon as the election is over. It's inevitable, she says.

As kick off looms in the bar, H. tells me that she was in hospital a while back and had a Turkish nurse who didn't speak a word of German: “She needed a translator,” which seems unlikely. I try to deflect her by saying that in Berlin it's really the English who don't bother to learn the language and don't integrate.

The German national anthem is booed as always at Wembley. Germany start off strongly, moving the ball around, making spaces. I am nervous. I remember 1990 and 1996, but not as well as 2000 when we beat them 1-0 and both sides stunk the tournament out. Germany used that loss as the catalyst for the reform of their football, winning the World Cup within 15 years, while I still wait for England to catch up.

The day I got my German citizenship was strange. My wife and I were supposed to be at the funeral of one of our best friends, but we consoled ourselves saying that she'd have wanted us to do this, it was more important, but I'm still not sure if it was. There were people in the Rathaus that day for whom it meant the world. They cried with joy, beaming proud thousand watt smiles.

While we got to keep our original nationalities, we were privileged.

Both P. and H. grew up here. P. said his childhood was dreamlike, there was always an adventure to be had.

“That's what I miss. You don't hear the sound of children any more.” He's right. H's daughter moved to the States a long time ago. She says, sadly, that she'll never move back.

The sublime Raheem Sterling, who has been pilloried by the English tabloids because he is young, successful and black, opens the scoring with his third goal in four matches. H and P. say that it was deserved, a good goal. H. says “who wins, wins” again with a shrug of her shoulders, and that she's happy for me.

H. said earlier that she thought everyone should have a little national pride, but when “we do they call us Nazis.” She said foreigners “get benefits we pay for. It's unfair.” P. said it was “only the lazy ones” he didn't like, “not the hard workers.”

I was complicit in my silence. I should have spoken up, told them that I was the lazy one. I don't tell him that I've been on benefits, myself, when the virus ruined my day job.

In the 1980s a vicious rightwing politician called Norman Tebbit said that people who moved to England should support the national cricket team. If they didn't they were the wrong kind of immigrant. With every stunted cheer for the football team I support, for they are just a football team, I fail the Tebbit test.

Harry Kane comes to life and scores the second goal. It's all over. England have played well without being spectacular. They've won three of four and haven't conceded a goal yet. I'm very happy.

H. says that, as the winner, it's on me to buy a round of schnapps. They are large and bilious looking.
We raise our glasses and she says that I am welcome back as her guest any time.