Rainer Sodaikat of the Neukölln Parks Department on the damage left behind after huge weekend parties in Hasenheide.

Berlin - Since the closure of Berlin's clubs in 2020, thousands of young people have been partying in Hasenheide in Neukölln in summer - resulting in noise and mountains of garbage. We talked to Rainer Sodaikat from the Neukölln Parks Department about the huge challenge of cleaning up his district's green spaces.

So-called corona parties are making headlines again this year. How many people show up?

It's the same game every year. Whenever summer rolls around and the nights are warm, throngs of young people come to Hasenheide on the weekends and party. That was also the case before corona, but back then there would be 200 to 300 people. Now there are thousands.

There are estimates from the police. A fortnight ago there were 3000 people, last weekend 4000.

Can legal action be taken?

That's quite difficult. Of course everyone has the right to be in a park, even at night. Everyone can have a picnic there. People are allowed to meet up. But on this scale it becomes a massive problem. There a lot of noise and vast amounts of garbage.

What damage is caused to the park?

Quite simple: 4000 people simply trample everything. When so many people dance on a lawn for hours, the lawn is gone. Simply gone. No turf can survive that. Then there are the destroyed shrubs, undergrowth such as ivy. All of this is often completely gone.

It's not good. It's the normal human waste you get when thousands of people tip back loads of beer and other alcohol for hours. Urine, excrement, condoms everywhere. The stench is usually so intense that it only helps if we water for two days. 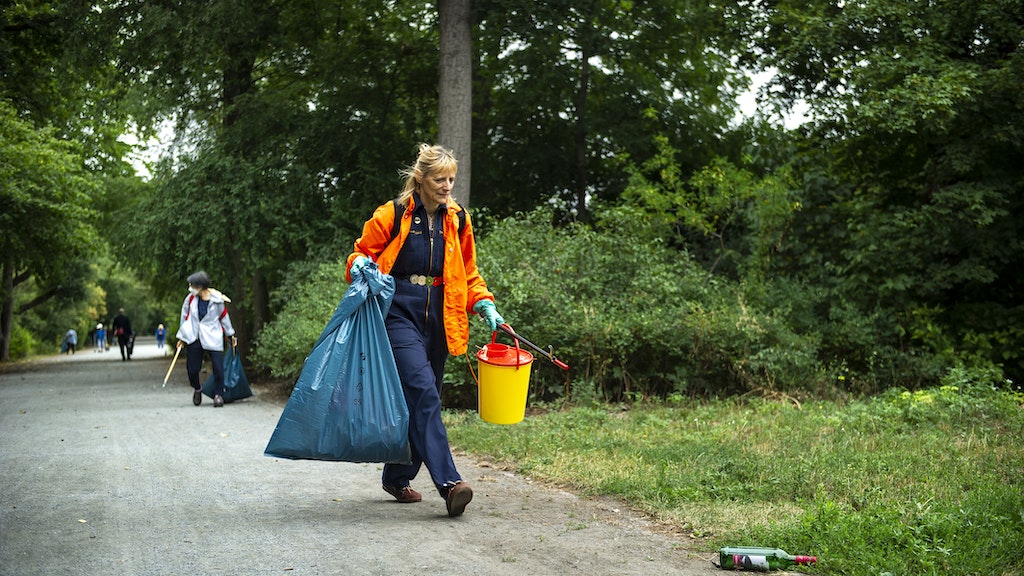 Trash crisisHasenheide: Picking up after the park’s nightly corona party

And there's really no legal recourse?

Prohibition is problematic. Everyone is allowed to stay in the park. Only camping is banned. In Berlin, you can only camp at campgrounds. Action can only be taken because of the noise and because of the destruction of the environment.

What do the police do?

They wait until residents complain about the disturbance at night. It takes a while for the first patrol to arrive and then call for reinforcements because there are so many people. Last weekend, the police first arrived at 12.30am. Then the Ordnungsamt was called in to help. It took until 5am to clear everyone out of the park.

What does the Ordnungsamt do?

It confiscates loudspeakers, DJ consoles or even power generators. That would be the first thing they could do. The generators should be sealed so that no oil drips out, but they are not - which is an infringement of environmental law.

How long does it take to clean up afterwards?

I have 12 people for the whole of northern Neukölln. I have to send at least half of them to Hasenheide. They remain busy for at least two days until the damaged bushes are halfway trimmed and the garbage is gone.

What about the volunteers?

Every Monday, volunteers pick up trash. They mainly take care of the small items, bottle caps, cigarette butts, broken glass. Bottles are not such a problem, at least deposit bottles, which collectors take with them.

It's great that there are people who clean up other people's mess ...

... not everyone sees it that way. There are a few friendly old ladies. I always jokingly call them the pensioners' gang. Quiet, hard-working helpers, who sometimes get subjected to insults. People say things like: "Leave it alone, otherwise the state won't do anything any more."

How much waste is generated?

After a party, about 15 tonnes. Without a party it's only a third of that.

What does it all cost?

Because of corona, we've had people quit, so we had to hire companies to do the clean-up. That costs about €3000. Week after week. I spend €53,000 per year on picking up trash in Hasenheide. That's 10 per cent of the total budget. On top of that, there are a few other parks. Altogether it's a third of the budget.

Money that could be saved if people took their rubbish with them?

Exactly, I always say: I'm throwing this tax money directly into the BSR incinerator. For €53,000, we could build a normal little playground.

The young people know that people come and clean up. It would only help if we left the litter lying around. It's the same with a kids' room. If the parents always clean up, the children don't understand the problem. But it's not politically feasible to simply let the park drown in garbage. Also for safety reasons, because of the rats and the health hazards. Besides, the party people would just move on.

When money comes into play, it can help. But with litter, it's the same as with dog poop. It's a misdemeanour and the fine is €25. We're not in Singapore, where a discarded cigarette butt is punished with a fine of more than €1,000. So we would need a trash police, so to speak.