Elizabeth Rushton
11.09.2021 | 12:33 Uhr
A ballot paper for the district assembly (BVV) elections, if they were in English too. They're still the only elections some foreign Berliners can vote in.Uroš Pajovič

Berlin-You’ve probably noticed from the reams of placards adorning Berlin’s lampposts that the national Bundestagswahl isn’t the only important vote taking place here on Sunday 26th September. The bad news for Berlin’s immigrant population is that of the two local elections and the referendum taking place on Superwahltag, only one of them gives some non-German Berliners the chance to cast their vote. In fact, recent data shows a third of Berliners don’t have the right to vote at all. Nevertheless, these three local votes could wreak big changes to life and policy here. Here’s what you need to know about what’s on the ballot paper in Berlin in two weeks' time.

The two elections to public office, the Abgeordnetenhaus (AGH) and Bezirksverordnetenversammlungen (BVV), affect two different levels of political representation. The AGH is the parliament that passes legislation on areas like education and infrastructure in Berlin as one of Germany’s 16 federal states. Ministers from the largest parties form the state government, the Senat, which has been a red-red-green coalition between the centre left SPD, left-wing Die Linke and the Greens since the last election in 2016. The BVV deals with local issues within each of Berlin’s 12 districts (Bezirke), such as public spaces and youth services. The leader of the largest party group in each assembly is appointed as district mayor.

Every third Berliner not eligible to vote

Normally, voters have to be 18 and hold German citizenship – but the BVV is different. Berliners with EU citizenship can vote and stand as candidates, currently the only way those witout a German passport can cast their vote. The voting age is 16 rather than 18, and each party needs at least 3% of votes to win seats, rather than the 5% needed for the Bundestag and AGH. Voters don’t vote for direct candidates, but rather for a party list. 34 parties are standing in the two elections, including the six mainstream parties (CDU, SPD, Greens, FDP, Die Linke, AfD) as well as newcomers like pro-European Volt and radical parties like the German Communist Party or far-right NPD.

What is a Regierende Bürgermeister and who will be the next one?

The Regierende Bürgermeister (or Bürgermeisterin) is Berlin’s political leader, the „governing mayor“ who chairs the Senat and represents the Hauptstadt at state level. After holding the role since 2014, the SPD’s Michael Müller is stepping down at this election to run for the Bundestag instead. His party’s pick to replace him is Franziska Giffey, who was Minister for Family Affairs, Senior Citizens, Women and Youth in Angela Merkel’s cabinet from 2018 until May this year, when she resigned over plagiarism in her doctoral dissertation. Prior to that, she was district mayor of Neukölln. The SPD is currently leading the polls in Berlin, with support from 23% of voters.

Klaus Lederer, mayoral candidate for Die Linke, is another familiar face as the culture minister in the current Senat, a position he gained after standing as his party’s lead Berlin candidate in 2016. He has made a name for himself during the pandemic as an advocate for the beleaguered club scene during months of closure. His party is currently fourth in the rankings, with 12%. 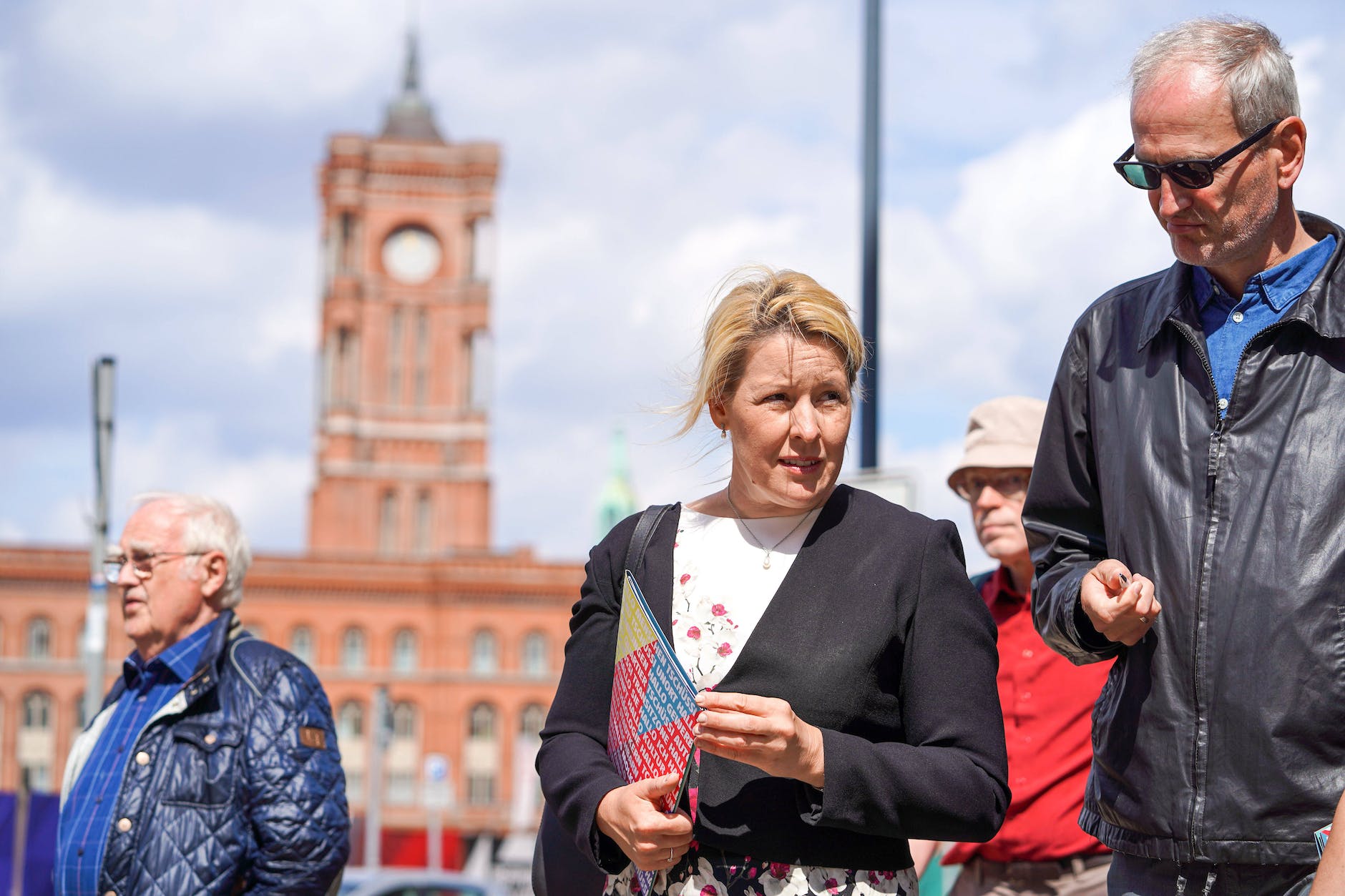 The CDU has maintained a steady second place with pollsters, currently at 19%. Candidate Kai Wegner is waging a campaign based on giving Berlin a „new start“ at the end of the Müller era. He says the red-red-green coalition of the last five years has caused division in the city – between urban and rural areas, renters and homeowners, drivers and cyclists – which he wants to bring an end to.

In third place is Bettina Jarasch of the Greens, who recently polled at 17%. The party enjoyed a months-long streak at the head of the polls earlier this year, peaking at 27% in February. Jarasch was a surprise pick for some, as she isn’t as well known as other Berlin Greens like Ramona Pop or Antje Kapek, despite having co-led the faction between 2011 and 2016. She has said she’d be happy for the red-red-green coalition to continue, only with the Greens in the driving seat.

Kristin Brinker, the AfD candidate, narrowly beat Beatrix von Storch, the party’s deputy leader in the Bundestag, to the position. She is seen as being on the more moderate wing of her party, but its campaign to make Berlin „normal“ again has been met with backlash, with election posters defaced and campaign cars torched.

Sebastian Czaja of the FDP is the party’s current AGH leader and has been critical of the current coalition’s corona strategy, recently saying there shouldn’t be another lockdown. He has consistently spoken out against expropriation of property into public ownership, calling for more building – although voters may remember his party’s push to build homes on Tempelhofer Feld.

What’s it all about?

As in the national election, the climate crisis is a recurring theme in the party manifestos for Berlin. The Greens, SPD, CDU and Die Linke want to make Berlin climate neutral, but disagree on how to achieve this – varying tactics include restricting car use inside the S-Bahn ring, compulsory installation of solar panels and extension of the public transport networks.

Housing comes up a lot too, including in BVV manifestos. Perhaps unsurprisingly, the governing Greens and Die Linke, whose Mietendeckel rent cap was ruled unconstitutional earlier this year, are advocating for its return or other forms of rent control to bring prices down, while non-coalition parties are only too happy to remind voters of the Mietendeckel’s fate, instead advocating for more building. The SPD says many of the flats it would build would be publicly owned.

Following a series of frustrations during the pandemic over the quality of Berlin’s digital education provisions, digitalisation is also a major theme in the AGH and BVV pledges. All parties say more efficient administration is needed in Berlin.

After months of campaigning, the referendum on expropriating more than 240,000 Berlin homes is also coming on election day.Benjamin Pritzkuleit

I heard there’s a referendum on too.

That’s right. Voters will be asked whether flats belonging to private housing agents with more than 3,000 properties should be taken into public ownership, which would see the expropriation of around 240,000 flats. 350,000 Berliners signed a petition by the campaign „Deutsche Wohnen und Co. enteignen“ calling for the question to be put to the public. Supporters say it would end extortionate rents and discriminatory practices by landlords against foreigners living in Berlin, but critics say it would be too expensive and lead to a tax hike.

What happens if Berlin says ‚ja‘?

Even if at least a quarter of Berliners entitled to vote in the referendum (618,000) do form a majority for the move, the final decision is still down to the city government. The mayoral candidates are a mixed bag on this issue, turning it into one of the biggest issues of the AGH election. Lederer has committed to putting the proposal into law if voters back it. Jarasch says she will vote yes in the referendum, but has stalled on whether she as Regierende Bürgermeisterin would enact a result for expropriation. The four other main parties’ candidates have said they would not approve a positive result, with Giffey saying she would not go into coalition with any party that insisted on doing so. That could indicate an SPD preference for a new coalition with the CDU and FDP, a so-called „Deutschland coalition“ due to the colours traditionally associated with the three parties.