The military airport on the north side will stay open to helicopters while the rest is turned into a mix of residential, commercial and educational real estate. 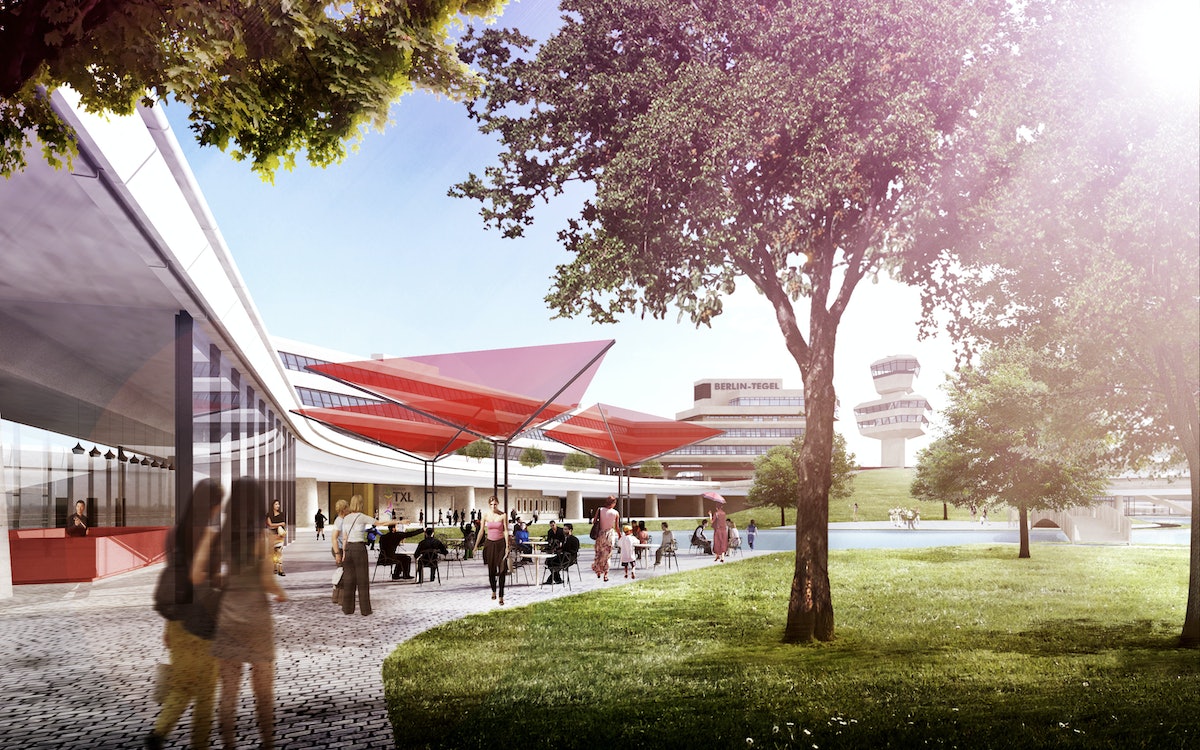 Berlin-While Tegel's past as an airport will come to an end on Sunday, 8 November, its future is already set. The hexagon airport will soon begin a transformation into a new neighbourhood with a park, 5,000 flats and an industrial estate focused on urban technologies - at an estimated cost of about €8bn.

"We have planned a lot and waited a long time for take-off clearance, but now all signs are go," says Philipp Bouteiller, managing director of Tegel Projekt GmbH, which will take over the site on 5 May 2021 once all aviation and security-related gear has been removed.

As Tegel Projekt prepares construction, it also wants to give Tegel fans an opportunity to visit their favourite airport once again, and from a perspective they've never seen. In August, the terminal will be reopened and visitors will have access to the runways and taxiways for the first time.

"We hope that the corona situation next summer will allow us to," says Bouteiller.

Construction should begin in 2021 with the addition of roads as well as remediation work at contaminated sites, such as the removal of asbestos in airport buildings. Work on upgrading existing buildings, which will be available for temporary usage, won't begin until 2022.

"Both commercial and cultural interim uses will be possible," says Tegel project spokeswoman Constanze Döll. In addition to cultural events, other activities like "drone experiments in the hangars" are possible.

Tegel Projekt also wants to boost its public relations activities, adding exhibitions about the airport as well as holding events and guided tours.

It also hopes to begin dividing up the real estate for new owners both within the Urban Tech Republic, as the industrial estate has been dubbed, and for the future residential area, the Schumacher Quartier, next year. State-owned housing companies, housing cooperatives and private building groups are expected to all erect new flats on the site.

Most of the investment will come from private developers, Tegel Projekt says, and the Urban Tech Republic is expected to host up to 1,000 companies of differing sizes, employing up to 20,000 people.

Beuth University, currently based in nearby Wedding, is expected to be one of the key users of the former airport's Urban Tech Republic. More than 2,500 students, or about 2o per cent of the student population, are expected to move into the former A Terminal. The building will be transformed into a mix of classrooms, labs and testing areas.

"With our research activities and a start-up centre, we will become a motor for innovation and economic development," says Werner Ullmann, Beuth University president. The university will focus its research on new technologies such as the efficient use of energy, sustainable construction, environmentally friendly mobility and recycling.

Berlin's fire brigade will also move its training activities to the airport. A new training centre in two hangars will include classrooms and training equipment.

The first tenants should be able to move into their apartments from 2027 if the planning and construction proceeds according to Tegel Projekt plans. The refurbishment of Terminals A and B as well as the tower and the hangars should then also have been completed, allowing Beuth University to move in in 2028. Tegel Projekt expects the entire renewal process to take about 20 years.

But the airport won't entirely close to air traffic this weekened. The military wing, known officially as TXL North, won't close until 2029, the defence ministry said last December. However, since the runways will be closed, only helicopters will be able to land there. Once closed in 2029, the military airport will also be converted into apartments, Döll says.

This article was adapted for the English Edition from the original German by Andrew Bulkeley.