Where crime is flourishing in Berlin thanks to Telegram

The app is much more than the favoured messaging app of corona deniers. It can help you find drugs and prostitutes. A noctural stroll through Berlin. 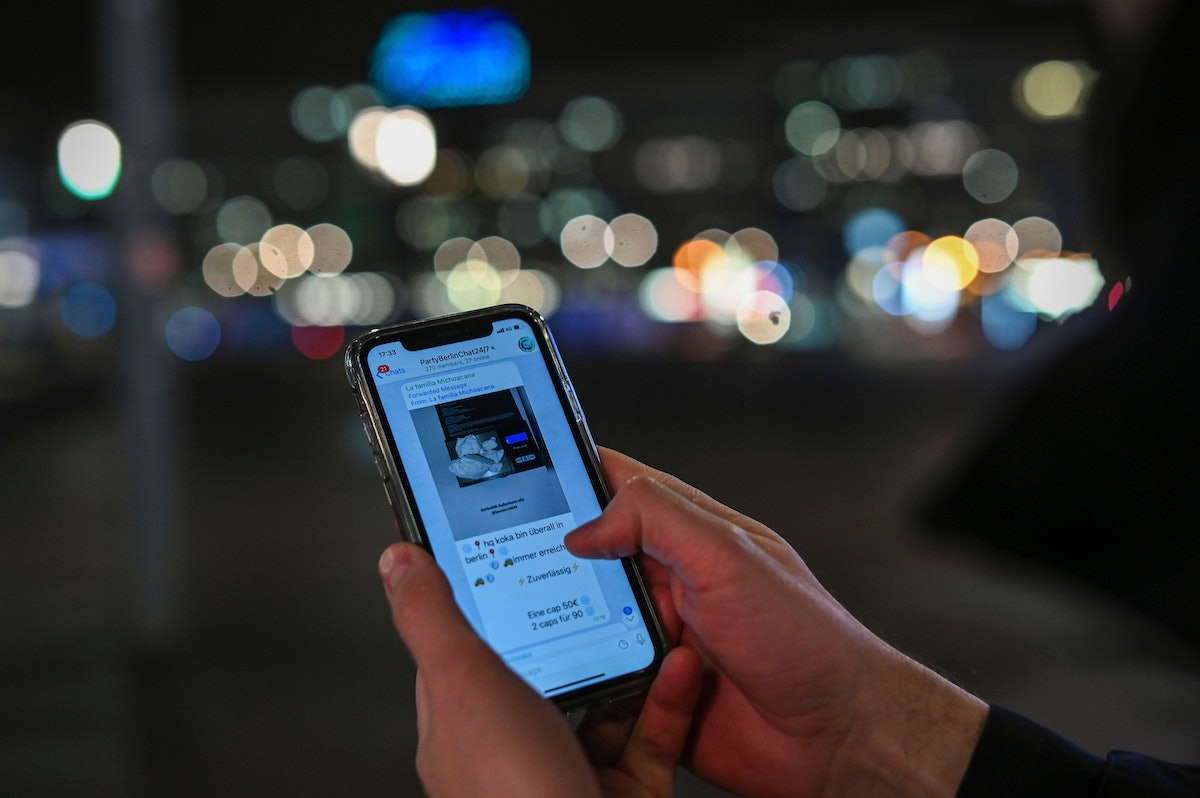 Berlin-Cocaine is on sale just down the street from Berliner Zeitung. A chat group claims to have the goods just 500m from our Kreuzberg offices, according to the Telegram app on my phone. Only a few streets away there's the "Coke Cola 24/7" group, marked with a taxi symbol and snowflakes. A "coke taxi", a drug delivery service.

Telegram is capable of so much more than normal messaging with friends and family. The app displays unknown people and groups in your immediate vicinity and is hence the gateway to a parallel world in which neighbourhood drug dealers, sex workers, conspiracy theorists and neo-Nazi groups become visible. They go about their business relatively undisturbed, discoverable by anyone who uses the app.

Telegram fell into disrepute some time ago and is considered by many to be the evil twin to WhatsApp. It's where corona deniers like rightwing vegan celebrity chef Attila Hildmann and Querdenker initiator Michael Wendler began spreading their wild theories and it's become one of the most downloaded apps.

A year ago, in Germany at least, Telegram was known almost exclusively to privacy-conscious tech nerds – even though users are not completely anonymous, at least not to others in the same chat.

And now, during the corona lockdown, the Telegram "People Nearby" search is handy for finding out what's going on behind closed doors in the neighbourhood. Criminal activity often feels like it's just a click away.

Two messages are all I need in the chat group with the snowflake to get offered drugs.

"What do you need?" comes the direct reply. Good question.

It becomes apparent that won't be a problem when the reply is "How much?" so I break off the interaction.

The police have their hands tied – most of the time

Instead, I call the Berlin police. If the criminal activities are open on Telegram, why aren't they being monitored and stopped?

"Investigations within messenger services, like all police interventions, are in connection with legal guidelines," a spokesperson explains. "Ideally, for example, when a criminal complaint is filed."

So in principle, chats are like private in-person conversations. The police are not allowed to eavesdrop on people in their homes. But Telegram chat groups are accessible to anyone with the app installed.

I take a nighttime stroll to explore Telegram Berlin. Phone in hand, I keep an eye out for nearby groups. In Kreuzberg, I'm first approached by actual dealers at Schlesisches Tor.

"Yo. You all right?" Just like in Telegram chats, a personal discussion is needed to get down to business.

As I walk, the groups displayed in the area change: "Parties in Berlin", "Sex Meetings", "Alexanderplatz", "Neukölln Weed", "Patriots in East Berlin". Some chats have hundreds of members, others just one. In some, there's lively discussion. Others are silent.

Many groups are private – you have to be invited first. The secret "Candyland" channel, where drugs are offered, is said to have more than 4,000 members. Only the tip of the iceberg is often visible.

Nevertheless, illegal content is easy to find. Vendors literally flood the public chats with advertisements that sound like a mixture of spam and a shopping channel: "Verified seller, delivery in Berlin. Only the best of the best. Colombian cocaine, +81% high quality."

The same sellers - with names like "Snow King Valentino" and "Yey Winter Service" - keep popping  up in different groups.

The demand is obviously there. Users in the chat groups openly ask about drugs like cocaine, the opioid Tilidine, tranquilisers and sexual enhancers like Viagra. Everyone wants to move to a private message.

When I ask in a group about where I can party, a "private pharmacist" replies that I should write to him directly. I'd rather not. Asking around costs nothing, though. Police investigators, on the other hand, I was told, are not allowed to request drugs in chat rooms any more than they're allowed to ask dealers for drugs on the street.

Standing next to the police station at Alexanderplatz I watch Tiktok-like videos of cocaine scales in the app.

Cops on Alexanderplatz, alleged drugs in the app.Berliner Zeitung/Volkmar Otto

But I ask myself: have more illegal activities really shifted to Telegram?

"An evaluation of messenger services does not exist," the police inform me. So there are no statistics. It's possible that such activities are only more noticeable during lockdown because people are at home and are using messenger apps more than before.

But prosecutors and criminal investigators also have methods of surveillance that they do not openly talk about. In any case, at the end of October, investigators cracked down on nine Telegram groups with 8,000 members during raids across Germany, targeting the trade of drugs, weapons and forged documents.

Most of the chats I encounter on my walk are about drugs. But even gold and currency trading, train tickets, fireworks and computer accessories are being sought and offered, without it being certain whether the seller and the goods really exist. Differences between the districts are hardly noticeable.

In Mitte there appears to be more prostitution than elsewhere that evening. Women and men offer sexual services with explicit photos. I'd be very embarrassed if a passer-by were to see my phone.

Thankfully, users remain anonymous. You can't see their phone numbers - and the Russian company doesn't reveal on which servers the pictures are stored. Telegram rarely deletes content. According to a study by the youth protection organisation Jugendschutz.net, only every tenth rightwing extremist post is taken down.

"All Telegram group chats are the private matter of the respective users," states Telegram's website but, if someone complains, "we carry out the necessary legal checks and take the content offline if necessary."

Some chat admins explain in a group's rules of conduct that nothing illegal should be shared. "Glorification of Nazis is not tolerated," according to the "Patriots in East Berlin" chat rules. Instead, content is shared that trivialises corona, demonises vaccinations and denigrates minorities.

Some groups link to subgroups where people can talk privately. The admins write that the main chat group with a fixed location only exists in order to be found more easily.

On large city squares, one finds public groups like "Alexanderplatz" or "Zoologischer Garten". Visitors often engage in harmless small talk but many of them make dubious offers. Who's behind the nicknames is difficult to know.

In the "Humboldt-Universität zu Berlin" group, I take part in a survey. The result: most people in the group aren't students at the university.

In the "Flat Earth Society TU Berlin" group, people don't discuss the flat earth theory. They play a virtual version of the card game Uno. Other groups are just looking for people interested in table tennis or boardgames. The administrator of "Handwerker36" ("Handyman36") explains that the group name does not have a double meaning.

It's impossible to verify whether the transactions discussed on Telegram are really taking place. It's possible that a lot of people are just indulging their fantasies out of boredom. The app reveals people's desires amidst the isolation of the corona lockdown.

In some chats, users are still virtually queuing outside techno clubs like Berghain or KitKat. In one group, a school pupil asks where they can get the answers for a test. In the "Party in friedrichsain :)" group, one user writes: "Has anything ever actually happened here?", while another replies drearily: "No."

Chats like "Christmas Alone" or "Lockdown Treff/Beziehung" - each with a single user and no replies - give an idea of how lonely some people are at the moment.

At the end of my tour, I actually find out via the "Nachtleben Berlin" Telegram group that the lockdown has been extended until the end of January. Good or bad news for Berlin's noctural Telegram communities?