Why has a Korean statue in Berlin got Germany in trouble with Japan?

The controversy around the removal of a wartime memorial in Mitte continues as the local mayor says a court will make the final decision. 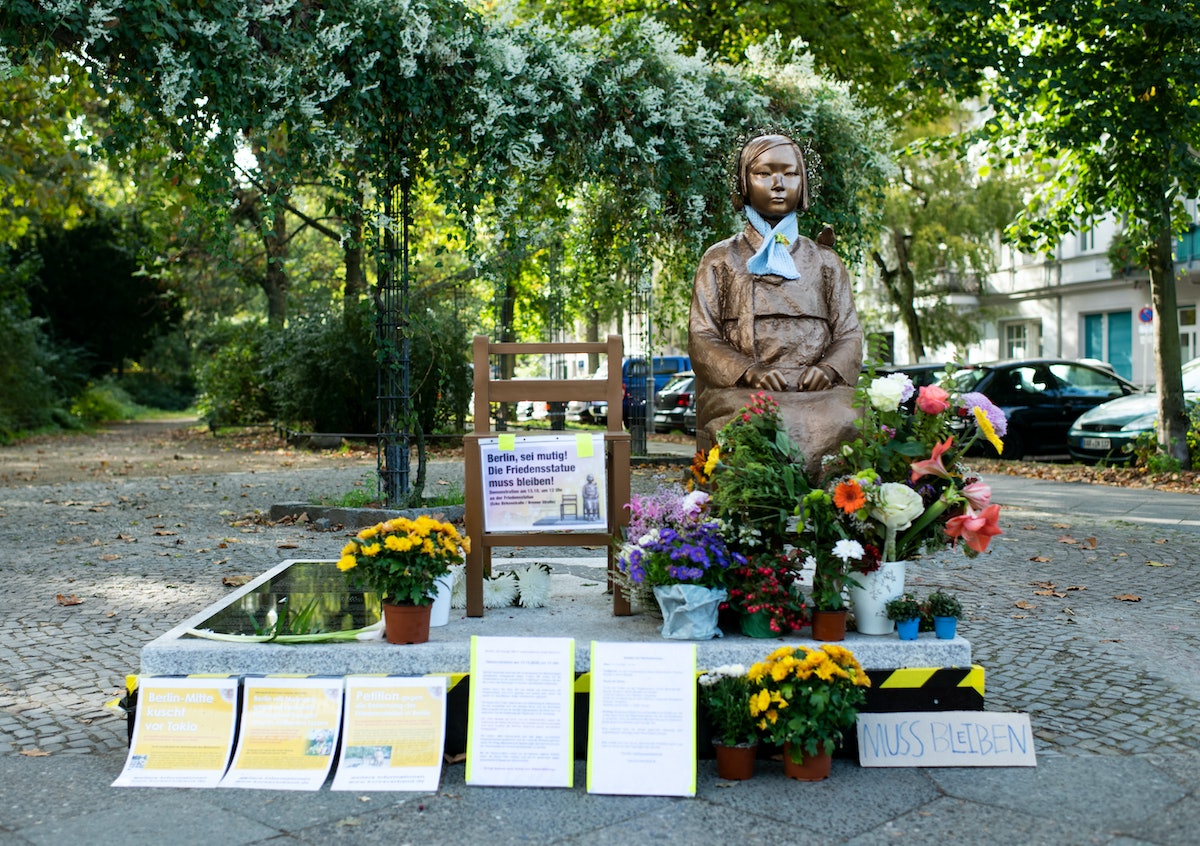 Berlin-Stephan von Dassel, mayor of the borough of Mitte, has somehow found himself playing a deciding role in a bitter international dispute. The centre of the debate is a "peace statue" installed in late September in Moabit (a neighbourhood in Mitte)  which commemorates a dark chapter of the Japanese army's Second World War campaign. The news of the monument's installation has apparently angered Japanese officials – and their intervention to have it removed was almost successful before a U-turn by von Dassel on Tuesday (13 October).

The memorial pays tribute to the estimated 200,000 “comfort women” who were forced into sex slavery by Japanese soldiers in the 14 countries they occupied before and during the war, primarily Korea, China and the Philippines. A small number of survivors of this violence are still alive today, in their 90s, and spending the last years of their lives campaigning for compensation and recognition. Japan has never given a formal apology for the crimes committed by its soldiers during the war.

The design of the Moabit statue depicts a young woman dressed in a traditional Korean hanbok sitting on a chair, her hands clenched into fists. The chair next to her is free. It represents those who did not survive, and invites you to sit down next to the young woman. Its symbolism is clear – there’s nothing that might raise an eyebrow, as could be said for a similar memorial installed in Pyeongchang, South Korea, in July that appeared to show then-Japanese prime minister Shinzo Abe kneeling before the seated bronze woman. So why has a harmless monument in Berlin-Mitte become the centre of an international controversy?

Not the first "comfort women" monument in Germany

It remains unclear how the row over the statue's removal started. It had previously been reported that the German Foreign Office instructed Mitte mayor Stephan von Dassel (Bündnis 90/Die Grünen) to dismantle the monument as quickly as possible to prevent diplomatic squabbles between Germany and Japan. But a ministry spokesperson has now denied this: "At no point did the Foreign Office make recommendations to the responsible Berlin authorities on how to deal with the statue there," they said.

Rundfunk Berlin Brandenburg reported that the Berlin Senat Chancellery had been in contact with the Japanese Embassy and had consulted with local officials in Mitte, resulting in the decision to remove the peace statue. Dassel has yet to respond to the Berliner Zeitung's request for comment on October 14.

However, on the evening of Tuesday, 13 October, he announced that he would postpone the removal until an evaluation of the situation could be provided by the Administrative Court. Previously, on September 28, Berlin’s Korea Association (Korea-Verband) filed an application for interim legal protection. It was they who unveiled the “Peace Statue” in Moabit on that day, at the intersection between Bremer Straße and Birkenstraße.

Monuments commemorating the wartime suffering of primarily Korean women exist throughout the world, not just in Asia, and the one currently standing in Mitte is not the first in Germany. Europe’s first memorial to the comfort women was installed in Wiesent, Bavaria in 2017 – its design, as well as that of the Mitte statue, was a replica of the one standing in front of the Japanese embassy in Seoul. There was supposed to be another in Freiburg as well – but Japanese complaints led to the project being scrapped.

What makes the debate around this statue different is that it is dedicated to victims and not perpetrators, as is usually the case in Berlin – as in the case of a statue of a problematic leader or conqueror, like the Otto von Bismarck monument in Tiergarten, which was vandalised with paint and daubed with the words "Decolonise Berlin" in July.

Who decided the statue had to go?

A Berliner Zeitung interview with Stephan von Dassel was due to take place this week to establish more of the facts surrounding the controversy – but was cancelled for “scheduling reasons”. It is thought that the Korea Association informed Mitte authorities in April 2020 when it submitted its application for permission to install the statue that the sculpture, which has appeared in a similar form on a private property near Regensburg and on campus at Frankfurt-am-Main's Goethe University, had already attracted outrage.

Mitte’s district office apparently approved the erection of the monument anyway - but officials have since claimed to have been misled. They say they were unaware that the information panels accompanying the monument referred to a smouldering political conflict between Japan and South Korea – which Germany would then be drawn into.

Ahead of what was meant to be the deadline for the statue’s removal, Tuesday saw protests in Moabit in support of the monument’s preservation. The 200 attendees called on Berlin to “be brave” in the face of pressure from Tokyo and allow the peace statue to stay. Stephan von Dassel was among those present, and received an open letter from the Korea Association against the removal of the monument.

Protesters gather on Tuesday 13 October to appeal to Berlin officials not to give in to Japanese pressure and remove the memorial statue.Bernd von Jutrczenka/dpa

Other politicians attended as well, such as Benedikt Lux, a member of Berlin’s city parliament for Bündnis 90/Die Grünen, and Taylan Kurt, who currently represents Bündnis 90/Die Grünen in the Mitte district assembly. He has confirmed to the Berliner Zeitung that the Greens and centre-left SPD in Mitte are in favour of preserving the monument. "SPD and the Greens take the position that the district office must withdraw the retraction [of the statue’s permit]," he said in a phone conversation.

Following the protests, Dassel said he now wanted to reconsider his decision and take the criticism of the statue’s removal but also Japan’s objections into account. In a press release, he announced: "We will use the time to once again thoroughly weigh up our own arguments as well as those of all sides involved in this complex dispute. (...) It would be welcome to design the memorial in such a way that all those involved can live with it."

With the fierce debate around the statue set to continue, it remains unclear how the matter will be concluded. Mitte now sees itself as the focus of an international dispute. The Japanese have still not fully processed their own war guilt. Many Japanese survivors of the war see themselves as victims, not perpetrators – but is this attitude reason enough to topple a monument abroad? A local court will soon decide on how to proceed, in what could strangely also turn out to be a ruling on the state of freedom of speech in Germany.