HomeBerlin10 questions about fashion for Louisahhh

Berlin/Paris-When Louisa Pillet, aka Louisahhh from Paris, plays a DJ set in Berlin, the experienced clubber knows that now they either have to dance or leave. Techno is a kind of music that takes no prisoners. Unless you take it out of the club and put it in the ears of guests at a fine dinner hosted by French fashion house Givenchy. That’s exactly what happened a few weeks ago at Paris Fashion Week, when Louisahhh performed a brutalist mix while the invitees sat at the table and dined.

It wasn’t just Louisahhh’s friendship with Matthew Williams, creative director of Givenchy, that was to thank for this event of perhaps surprising contrasts. It also reflected her status as a celebrated musician, who once moved from the USA to Europe because she was not considered commercial enough for the audience in her home country. A good decision, and one that launched Louisahhh’s career to the max and has made her one of the most sought-after female DJs. Recently, tracks from her debut album The Practice of Freedom have been remixed by Berghain stars like Imogen and French electronic legend Vitalic, and one of her sets is currently streaming on Arte.tv – cultural adulation par excellence! She also hosts her own podcast, Sober Sex, which is about identity and femininity – topics she wants to address alongside her musical message. And it’s clear that fashion plays a big role in this ...

1. How often do you change outfits during the day?

I am a laundry nightmare! I change out of my sleeping clothes and into my workout gear to exercise before dawn, then into riding gear to cycle to the horses that I ride, then again upon getting home – after a hot shower! I normally change into ‘outside clothes’ (if I have to see anyone, usually Stüssy trousers, a tank top and a sweatshirt or long-sleeve), or ‘inside clothes’ (leggings or sweats and a different, rattier assortment of sweatshirts) if I am doing creative work uninhibited by the gaze of strangers. If I am gigging that day, there will be an additional set of clothing for this purpose.

2. What is your favourite piece of clothing right now?

I just got a custom-made latex blazer from Berlin-based Florian Mathé in black to transparent ombre latex, with a matching holster for my in ear monitors! This is for live performance – it was quite an investment but I am so excited to play in it. I love the ritual of suiting up for a show or a DJ set and this piece makes me feel sexy and powerful and ready to roar.

3. Recently you released a T-shirt in collaboration with Alyx, the brand of Givenchy creative director Matthew Williams. How did that come about?

I’ve been a huge fan of Alyx’s and Matthew’s work for many years and was lucky enough to play a couple of parties for Givenchy this season. I also played Alyx’s first Paris Fashion Week party in 2017 and have been enamoured ever since. I feel grateful to call Matt a dear friend. The first single from my debut album has the chorus ‘Instrument of/ Chaos, Love’ and the 2017 spring collection from Alyx was named ‘Love/Chaos’.  So this was now a cool opportunity to synergistically re-release the collection’s tee as a collab for a charity called The Okra Project. I’m delighted that Matt was down and that we could make it happen. I really appreciate Givenchy’s aesthetic universe and its history, this character to the clothing that feels both challenging, tough and super refined and highbrow.

4. When you played a set at a couple of Givenchy dinners at Paris Fashion Week this autumn, what were your considerations when you chose the tracks for these events, which are not typical techno events in the first place?

Honestly, as a DJ, playing dinners is an interesting challenge because the skill set of making people dance in a club is entirely unhelpful in that setting. In these instances, I tried to focus on cultivating an energy or an ambience that was true to the character of the house, and Matthew’s personal musical universe – which I know is crucial in thinking about the collection – and also the demographic that the brand serves. Additionally, it was imperative to keep the vibe of the room low key enough that people could talk and eat without feeling distracted or too hyped up. For me, this was an exercise in subtle discernment, subliminal control! This was a cool way to practice a different skill than I am used to using as a DJ or performer (when I'm normally melting people’s faces with noise).

5. We’re seeing a strong 90s trend in fashion right now, which is bringing techno back too. Would you agree?

For me, this is hard to say. I feel like we’re seeing a more commercial resurgence of techno music in the last few years that is largely female-fronted, with artists like Nina Kraviz, Amelie Lens and Charlotte DeWitte headlining the big stages around the world. In perhaps a more fashion-forward, ‘subcultural’ context, we are also seeing more hardstyle, rave-y, trance-y, fast and melodic music being played to the ‘cool kids’, and this definitely feels reminiscent of the 90s both sonically and aesthetically.

6. Besides your special connection to Givenchy, do you work with other fashion brands as well?

I’ve also had the opportunity to work with brands like Balenciaga, Louboutin, Paco Rabanne, Sonia Rykiel, MSBHV, Chanel and Nike. It’s always cool when the worlds of fashion and music intersect and I am happy to get to hang out at that intersection on occasion. I also worked with Virgil Abloh, who I can actually credit for much of my presence in any kind of fashion community since we became friends around 2013. He was the first person to put me on in those kind of parties, and his endorsement meant a lot … beyond any clout-by-proxy, he was so inspiring, and curious, and enthusiastic, generous and joyful. His passing has been a real heartbreaker for the many people that loved him, myself included. I feel like the world has lost a really important source of light; I only hope that we can pick up his mantle of love, and carry on his legacy faithfully in focusing on connection and disruption and hope. That being said, there will never be another one like him, and it is so, so sad that he’s gone.

7. When you compare Berlin and Paris in terms of fashion style, what comes to mind first?

Paris feels quite conservative to me in terms of fashion, very luxury-oriented, a mentality that’s built around quality staples of a wardrobe. Berlin feels like style is much more geared towards clubwear, more fetish-inspired, less high fashion. Both are very cool. As a New Yorker living in Paris, I feel like I rest or oscillate somewhere in between these two points.

8. You change your hairstyle very often, right now you’re sporting a mullet. Do these hairstyle changes also change the way you dress?

Ah yes, my blessed mullet. Sometimes I feel like the haircut is an excuse to exercise different parts of myself and dress up as these characters within me, but it’s pretty subconscious. My wardrobe got very ‘rude boy’ when I had a Chelsea and shaved head, but I was wearing more makeup because I had no hair. With the mullet-perm (out of control), I dressed like a child going to a NASCAR race (bike shorts, big T-shirts, mirrored cycling sunglasses). At the moment I’m working with a little punk ducktail thing and it’s pretty versatile; we’ll see where she progresses from here.

9. Which fashion trend do you dislike the most at the moment?

The return of early 2000s looks, like the low, low rise bootcut jeans and skinny eyebrows. This brings back traumatic memories of being an awkward teen. Strongly dislike.

10. What is your pain threshold regarding the price of a piece of clothing?

I have little pain tolerance when it comes to spending money on clothing; I prefer to be given things by brands I admire in exchange for my work (I do very good work).

Our interview with Louisahhh first appeared in German here: 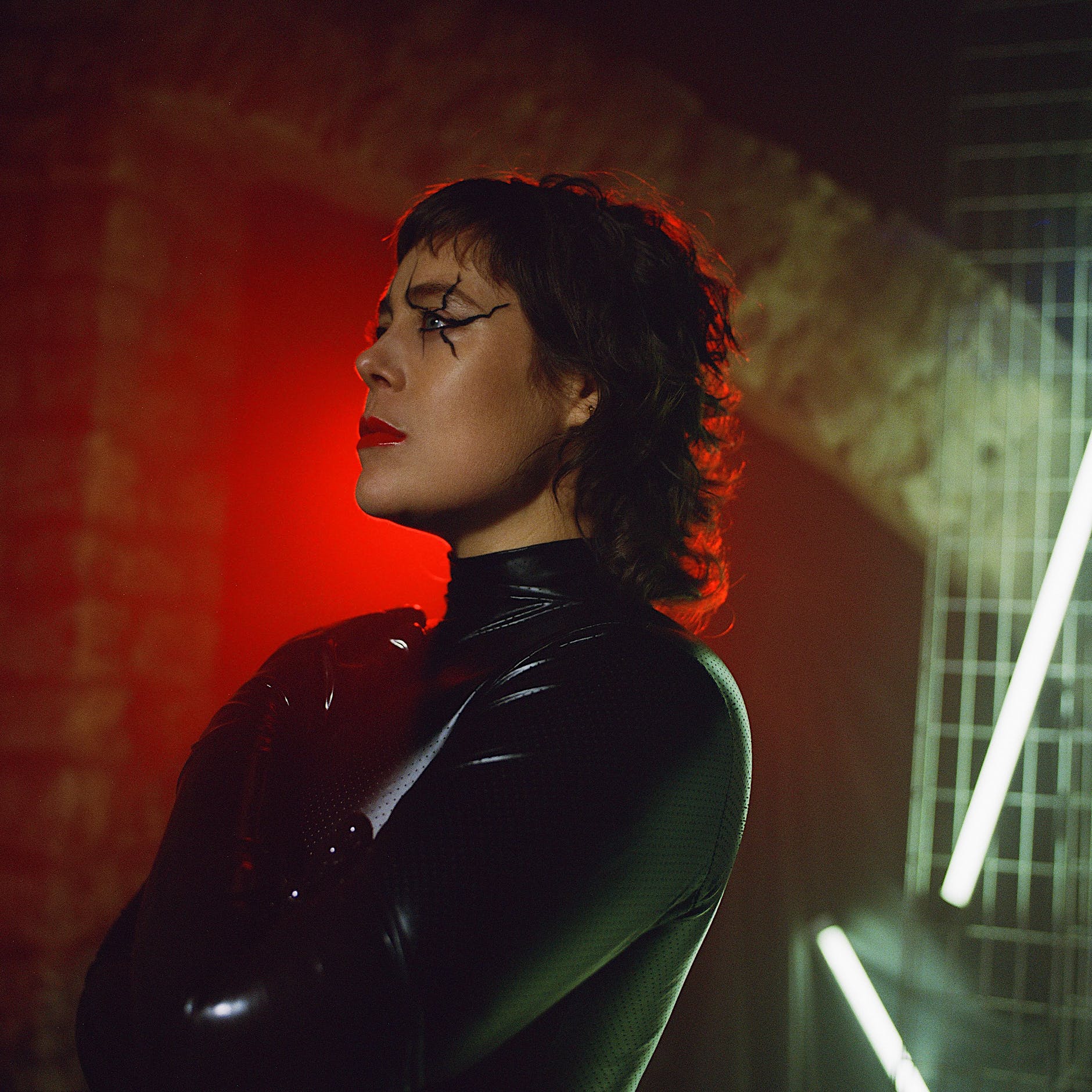